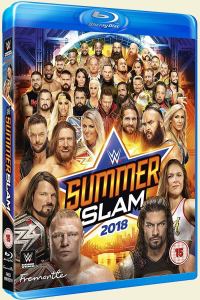 Well, Vince McSenile is in charge of this show and with his man-crush on Roman Reigns showing no signs of abating any time soon, I think we all know the answer to that one. The Big Dog is headlining once again this year and once again, is facing Brock Lesnar for the Universal Title as the previous 100 failed attempts by reigns to topple the Beast have been such captivating fare and real draws for the company.

Sarcasm aside (for now) Brock had publicly been in negotiations to return to UFC (at 41 years old!), even appearing at one of their PPVs to challenge one of their fighters, so getting the belt off Brock is not just a priority for WWE but also is an anti-climax for reigns four year struggle to win the big one and slay the beast – if he can do it.

There’s only one way to find out – watch this show via WWE Home Video; actually there are two ways, check out the back cover of this release as they spoil the result of this match and a few others, as do the Blu-ray bonus features because idiocy.

Summerslam took place on August 19th 2018 at the Barclays Centre in Brooklyn, New York before 14,000 fans with commentary from Tom Phillips, Corey Graves, and Byron Saxton for the SD Live matches and Graves, Michael Cole and the insufferable Jonathan Coachman for the RAW matches.

As ever, while my match review won’t contain any results or major spoilers, expect plenty of opinion and backstory to the matches.

So these two go from headlining the Extreme Rules PPV the month before in a big stipulation match to curtain jerking this show in a standard title match. The buzz for this match however is that whilst Ziggler has Drew McIntyre in his corner, a vital component in Ziggler’s victory last time, Rollins has returning Shield buddy Dean Ambrose in his!

After suffering an injury in late 2017, then a near death infection during rehab, Ambrose is back with a shaved head, thick beard, ripped physique and his trademark bad attitude to counter McIntyre at ringside. Really good match as expected from these too and a cracking way to kick off the show but as a singles feud it has run its course a little, but we know now Ambrose is back, a tag team feud surely beckons.

Rowan and Harper have been tag champs since WM 34 yet they’ve had very few notable title defences and even fewer on PPV, which highlights the sad state of affairs regarding the tag team division on SD. This has left them squashing jobbers in handicap matches instead of tearing the house down against The Usos, The Bar and Anderson & Gallows.

Predictably the New Day earn the title shot here which is a blessing since they had been reduced to a time filling comedy act on TV and at least are over enough to earn a promotion from the pre-show for the champs to the main show. Big E and Xavier Woods were the pancakes in peril here, taking a right beating until a lame finish spoilt an otherwise decent match. Unfortunately, Rowan suffered a bicep tear here and had to gut it out in a rematch on SD a two days later before hitting the injured bench.

Like Rollins vs. Ziggler, this feud should have climaxed with the Steel Cage match at Extreme Rules where Owens paid tribute to Mick Foley’s infamous Hell In A Cell bump with a 20th anniversary version of it by being chokeslammed off the top of the cage through the (padded) announce table.

Instead of this being the end, Owens was back on TV a week later and still keen to get even with Strowman so he wrangled a rematch that saw Strowman’s MITB briefcase on the line. Knowing Owens is the sort of guy who would capitalise on an opportunity and therefore would likely inveigle his way into the title match there was a lot of intrigue going into this match. But, as I said earlier, Vince McSenile is booking this show…

One of the more compelling stories on SD is the rehabilitation of Becky Lynch, who has remained popular despite poor booking and being overlooked in favour of Vince’s (blonde) favourites. Having not had even a sniff of a title shot since January 2017, Becky began a winning streak to earn a shot against Carmella here – except her “best friend” Charlotte returned from injury (a ruptured breast implant) and automatically “earned” a title shot to make this a triple threat.

It’s basic storytelling but very effective as here are now a number of possible outcomes based around the same idea – the possible dissension between Becky and Charlotte. Is the title bigger than their friendship? Has Charlotte usurped Becky in her big moment? And is this of any advantage to Carmella as defending champ?

The match was very good and saw Carmella do her best work to date considering how far behind the others she is in the ring. The above story drove the match and Becky was the most popular of the three, helping create a level of interest hitherto lacking in SD women’s matches. And maybe one day Charlotte will hit a moonsault to the floor that actually connects!

Appearing this early in the show solidifies the disparity in importance between RAW and SD in Vince’s eyes as he’d never put a Universal Title match this low down the card. A match the hardcore fans have been waiting for due to the history of these two in ROH and TNA/Impact Wrestling, it is no surprise that the WWE version is built around a “soap opera” storyline.

It started out with Joe attacking AJ at a contract signing on SD but then got silly as Joe brought Styles’ family into the equation, accusing AJ of being bad father for putting his wrestling career over his children. Joe is great in this role as the sociopathic antagonist but these “personal” angles always have a habit of getting sillier as they progress.

No question the match was great but the story got in the way, as AJ’s wife and daughter were at ringside providing a distraction for Styles and an opportunity for Joe to get inside AJ’s head. leading to a disappointing finish that killed its heat. I get the feud has to continue but Summerslam is too big a stage for lame finishes.

Since the show was already 10 hours old at this point, they sent Elias out because we needed more caca to fill the time. His guitar fell apart and he stormed off. There, I just saved you five minutes.

The Miz vs. Daniel Bryan

This match has been 8 years in the making apparently. It dates back to Bryan’s WWE debut in the original NXT in 2010 as Miz’s rookie, the latter being nothing but abusive towards his assigned student. A few months later Bryan beat Miz for the US title and that was that. Fast forward to 2016 when Bryan was SD GM and the two would reignite their feud on Talking Smack, a network only show nobody watched, in which Miz’s ire at the retired GM would get personal.

When Bryan was cleared to wrestle again at WM 34, it was only a matter of time before these two would cross paths in the ring again, beginning with Bryan’s final act as GM to draft Miz over to SD from RAW so he could punch Miz in the face. After months of insults and baiting, the match finally happens here. It was technically fine but went a little too long and shockingly, given the intensity of the build up, the crowd was too tired to get into it, which you can’t blame either man for. Good but not great.

Spoiler – the Demon is back! That is really the only thing worth writing about this match.

After beating Hardy in 10 seconds for the US title at Extreme Rules, Nakamura’s reign has pretty much been a conduit for Randy Orton to attack Nakamura’s opponents, especially if they happen to be Jeff Hardy. I’m not sure how this helps Nakamura but Vince loves Orton so we’re stuck with it.

The crowd really couldn’t care less about this match even with Hardy’s popularity and it hurts to see these two work in silence. In one of those “Do Wrestlers Hear Themselves Talk?” moments Hardy, who has said he will stop doing the Swanton because, at 40 years-old, his back is knackered, not only does a Swanton but also does a second one onto the ring apron!! At least we can look forward to Jeff’s wheelchair being painted in psychedelic colours…

It’s been well documented that Ronda Rousey didn’t want any preferential treatment upon joining WWE, as illustrated by making her debut at the end of the Royal Rumble, signing her contract on PPV, having her first match at WM 34 AND getting to choose her opponent, getting her first title shot two months later and finally getting this title shot as a reward for being suspended!

Rousey had Natalya in her corner, wearing the same jacket her late father Jim “The Anvil” Neidhart wore when the Hart Foundation won the WWF tag titles at Summerslam 90. Rousey was sporting weird eye make-up that made her look like Mantaur, a WWF Wrestlecrap gimmick from 1994. Match was short but at least it woke the crowd up. I’ll give Rousey credit she has adapted very well to wrestling but as inevitable as this match was and as credible as she is, it is too soon into her run.

Corey Graves urged us to hear the “roar of the crowd” when Reigns came out. No Corey, they were emphatic boos! Another short match and one almost identical to their previous bouts, the conceit of in this case was the holder of the MITB briefcase and whether he would cash in – that, and if there was another shock twist regarding Brock’s imminent departure. Otherwise, meh!

It looks like it is 4-0 to NXT although this card did have some potential to sway things in the main roster’s favour. Instead, all this show does is re-enforce the differences between the two presentations philosophically and creatively, which we already knew is like night and day.

But this is just one problem that isn’t going to change any time soon as long a Vince is in charge. Ignore the constant declarations in public interviews that WWE is listening to the fans, former writers have said they only write for an audience of one and he is a myopic, 73 year-old man who honestly believes he knows what the fans want more than they do and with WWE being the top wrestling promotion in the US – and arguably the world – he has no reason to change this attitude, even with fan deserting the product en masse.

The other issue is the idea that bigger is better and by offering huge bloated events like this is giving the fans value for money; the downside is that you can have too much of a good thing and the enthusiasm of the live crowd flags after hours of mediocre filler and lousy booking, reactions aren’t going to be pretty.

So, as this doesn’t change neither does my summary of this show – cut out the fat and there is a decent PPV here and whilst newsworthy in some aspects, a seismic shift away from the status quo is still but a distant dream.

WWE RAW Tag Title Match – The B Team (c) vs. The Revival