I Got Life! (Aurore) 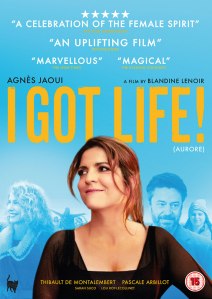 I Got Life! (Aurore)

Life, as the saying goes, begins at 40. Apparently for women however, this milestone anniversary gives them just ten more years as a fully active and useful member of society before the big 5-0 arrives, marking the beginning of the end as the menopause comes knocking on the door.

Aurore (Agnès Jaoui) is our 50-year old woman under the spotlight, separated from her husband Nanar (Philippe Rebbot), she lives with their teenage daughter Lucie (Lou Roy-Lecollinet), while older daughter Marina (Sarah Suco) announces she is pregnant. Aurore doesn’t feel ready to be a grandmother but it takes it all in her stride, but gets no help from Nanar who has moved on with a younger woman.

In helping out real estate agent friend Mano (Pascale Arbillot) by posing as an interested buyer to sway someone else into buying a flat, Aurore is reunited with old flame Totoche (Thibault de Montalembert), now an ultrasound operator at a nearby hospital. But as the possibility of rekindling this old romance is a prime concern for Aurore, she also has to rebuild other aspects of her life for which her age seems to be a major hindrance.

Writer-director Blandine Lenoir’s intent for I Got Life couldn’t be any clearer – women are not finished after 40. Not are men for that matter, but society does seem to give us chaps an easier pass than women but it is still demonstrably untrue in both cases. Lenoir clearly feels that this isn’t celebrated enough in film hence the creation of Aurore, a 50-year-old woman with plenty left in her tank and is up for the ride.

Taking its English title from the Nina Simone song as it features in the film’s soundtrack, it is hard to define this exclusively as a feminist rally cry due to the story tending to follow some very conventional routes. Part of Aurore’s search for middle aged happiness lies in finding the right man to share it with – the choices being either revisiting the past with Totoche or moving forward with new lover Hervé (Eric Viellard).

Yet, with Aurore’s trials and tribulations not being limited to just her love life, much of the script passes the Bechdel Test as she and other women in her age group featured in the film deal the dreaded menopause. But for Aurore this is a mere distraction as she too many other things to worry about, trying to keep her own emotions in check to comfort daughter Marina as she freaks out during her pregnancy.

Sexism raises its ugly head in a different manner for Aurore when the café she works at gets a new owner in the form of a young hipster Seb (Nicolas Chupin). This pretentious twerp renames all of his female staff with “sexier” names – Aurore is Samantha – and puts the older woman behind the bar so his younger fillies can charm the customers. You can guess how that works out.

Elsewhere in an amusing but very wrong scene, Mano approaches a couple in the street made up of an older man and younger woman, and chews the man out as if she was his cheated on wife. She doesn’t know the man, she simply hates this particular relationship dynamic and this is her protest, which has unexpected results. It’s not a practice one can morally condone but there is some black humour to be found in this.

As a man, it is easy to watch this film and not be offended by how many of them are portrayed since we’ve had it pretty good in cinema and TV for a long time. Given that some men are complete pillocks in real life it is worth reminding ourselves of this and learn from it. Lest we forget though, Aurore is looking for love and she does get some action, defying the feminist maxim of women not needing men to be happy.

With one daughter about to start her own family and the other following her DJ boyfriend to Spain, Aurore wants, and deserves, to have someone keep her warm at nights too. One of the more delightful scenes sees Aurore dancing alone to the aforementioned Nina Simone song to be joined by her daughters as youngsters, putting Aurore back in what we assume was her happiest period in life, even for a brief moment of fantasy.

By Lenoir’s own admission, the humour and stories told on this subject are very broad which is why there are TEN names credited to the script. Unfortunately this is a case of too many cooks as the narrative is often interrupted to take in a scenario that doesn’t really go anywhere, structurally leaving the film to often feel like a series of vignettes rather than a steadily constructed story arc.

Overall, there is more consistency than disruption despite this surfeit of ideas but the collateral damage is in the rushing of pertinent subplots like Aurore’s relationship with Hervé. The brisk 85-minute run time is also to blame but Lenoir manages to steer the general themes and story arcs through to the conclusion successfully enough, complete with the obligatory happy ending.

Appearing in almost every scene Agnès Jaoui makes for a joyous and likeable presence as Aurore, fitting the requisite credentials of the role physically and personality wise. She is feisty yet vulnerable, attractive yet hardly glamorous, giving but also in need of love herself. Jaoui brings an all-important sense of self-awareness to the portrayal so Aurore doesn’t fall into a traps or end up with egg on her face.

I Got Life is a film with a much needed and non-patronisingly optimistic message for any women feeling over the hill and discarded by society’s standards after 40. It’s a light and breezy enough affair that doesn’t itself too seriously thus its uplifting spirit and positive outlook is more resonant, whilst being very inclusive for us chaps despite its flawed male characters.