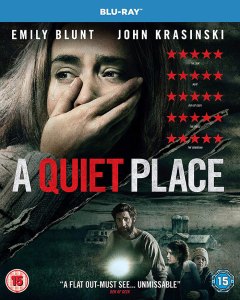 One of the ways actors trip up when making films, TV show or performing in stage plays is forgetting their lines, especially if the script is a lengthy and garrulous affair. You can probably imagine the joy the cast of this tense horror/sci-fi outing felt when they were hardly any dialogue to for them to learn as the central premise revolves around silence.

In 2020, the earth has succumbed to an alien invasion and survivors are few. Lee (John Krasinski) and Evelyn Abbott (Emily Blunt) lead their children, deaf daughter Regan (Millicent Simmonds) and sons Beau (Cade Woodward) and toddler Marcus to safety in a remote farmhouse. But they must remain completely silent as the aliens have ultra-sensitive hearing, reacting to even the slightest sound.

A Quiet Place sounds like the title of a Merchant Ivory period drama so hopefully filmgoers read the synopsis before deciding whether to see it to avoid being shocked. There was a lot of noise about this film upon its theatrical release earlier this year, and yes, that lousy pun was intentional.

The premise is ridiculously simple. It has played a small part in ramping up the dread in horror films in the past yet has ever been extended to a whole film – until now. An original script – yes, they do still exist in Hollywood, by Scott Beck and Bryan Woods was reworked by John Krasinski, the first draft of which convinced his real life wife Emily Blunt to join the cast after insisting she didn’t want to act in it.

Just as well she did as the established marital chemistry between Blunt and Krasinski as recent second time parents adds an authentic empathy as a couple whose sole purpose is to ensure the safety of their children. With daughter Regan being deaf, the family has the advantage of being fluent in sign language, allowing for non-verbal communication to avoid triggering the aliens’ sensitive ears.

Unfortunately for the Abbotts, and this is a tiny but necessary spoiler, Beau is at the age where he can’t understand the gravity of the consequences his actions may incur. When he plays with a battery operated toy spaceship he seals his fate before Lee can save him from an incoming alien attack in the heart-stopping pre-credit opening sequence.

Fast forward a few years, Marcus is now a pre-teen (Noah Jupe) and Evelyn is pregnant again. This is one of the few plot contrivances that will either have you biting your nails in anticipation of what is to come, or cynically rolling your eyes and thinking “Really?”. Even if you fall into the latter category there is plenty of hideously tense drama built around this usually joyous – and noisy – life event.

Putting aside the fact the conception process is noted for engendering vocal excitement, which surely must have been a strain to conceal from the aliens with their radar like ears, an entire scene in the late second half is built around Evelyn going into labour just as an alien breaks into the house. It is one of those instances that should be ridiculous to watch but becomes a compelling piece of febrile filmmaking.

What gives the story a palpable, poignant edge is how this isn’t just about surviving in an unforgiving hostile environment where death is imminent through a simple human reaction. A human drama unfolds in the growth of the two children and the pressures put upon them as they also have to deal with life’s natural changes under these oppressive circumstances.

Regan thinks her father blames her for Beau’s death and as she enters adolescence, this manifests itself in her acting like a typical stroppy teen, pushing Lee away as he tries to connect with her and his attempts to build a superior hearing aid for her. Meanwhile, young Marcus is terrified of everything and doesn’t enjoy the prospect of assuming the role of “Man of the House” should the inevitable happen to his father.

I can imagine some this will view this as a dull domestic drama, totally out of place for an advertised horror film but that is missing the point. Like the traditional jump scares, the velocity of the aliens’ arrival to wherever a sound is emanating from is frighteningly quick, whilst their stealth in creeping in the shadows provides equal cause for concern. In other words, we are given reason to care if this family is summarily slaughtered.

The aliens are a curious construct – slender, bipedal figures with long arms resembling a mantis sporting razor sharp claws, lengthy gazelle-like legs and a bulbous head that separate to reveal a fleshy cavity that is its ear. No information is given about them beyond a few details picked up from the press at the time of their arrival, the most vital being they are blind and possibly only three of them.

Because they are blind and respond only to sound, the film has a wonderful readymade gimmick in the near misses between the aliens and their intended victims. I defy anyone not to feel their heart jump into their throat as pregnant Evelyn wanders through the dimly lit cellar and an alien passes close by her, almost bumping into her, both oblivious to the other’s presence.

As mentioned before the married leads work very well together on screen but not to the exclusion of the younger cast members, giving superb performances in conveying the terror a kid would feel as well as nuanced maturity acquired as a result of their unusual predicament. Credit also for Krasinski’s direction, not the usual ham-fisted attempt from an actor-turned-director, showing real flair for the genre, especially in building suspense.

One can take away many things from watching A Quiet Place, but the most affecting is the power of silence and how it makes even the simplest sound be both a blessing and a prelude to a nightmare. Sometimes contrived but a film definitely worth shouting about.

2 thoughts on “A Quiet Place”