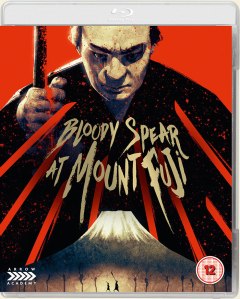 It needs pointing out that Bloody Spear At Mount Fuji is a very misleading title – except it isn’t. Upon reading this title (and seeing the artwork for this Blu-ray release), it is assumed that either a horror film or violent samurai tale awaits; only the latter is partially true however, and even then this isn’t apparent until the final five minutes.

The first film by Japanese director Tomu Uchida upon his return to Japan after being held captive in Manchuria during World War II, is in fact a road trip movie with an admittedly skeletal plot around which a series of vignettes detail how the fates of a disparate group of travellers intertwine. Yet beneath this flimsy concept is a trenchant social commentary concerning the class system in Japanese society.

Propagating the altruistic notion that wealth and status are no measure of a person’s worth when the strength of their heart and character is more important, Uchida at first presents us with initially appears to be a typical Edo period Samurai flick. As the film progresses, elements of light comedy and poignant melodrama creep in as the stories of the travellers are revealed.

Samurai Sakawa Kojuro (Eijiro Kataoka) is heading to Edo to visit his mother, with his two retainers Genpachi (Chiezo Kataoka) and Genta (Daisuke Kato). Kojuro is a gentle and thoughtful man who sees no rank between himself and his servants, but when he’s had a drink, he turns into an unruly and obnoxious brute, therefore his mother his expressly told Genpachi and Genta to ensure her son doesn’t drink.

Uchida uses this to examine the caste system and how those at the bottom of the ladder suffer the most from the hierarchy of authority. The two retainers are loyal to Kojuro because he treats them well – when spear-carrier Genpachi gets a blister, Kojuro insists he rests to treat it – and must obey their master, yet they have a duty to his mother too. So, whose command is the more urgent and whose wrath do they risk by disobeying the other?

Also heading to Edo are Tozaburo (Ryunosuke Tsukigata), carrying with him a vast sum of money, Otane (Yuriko Tashiro), a young woman and her elderly father, a shamisen player (Chizuru Kitagawa) and her daughter (Chie Ueki), and orphan boy Jiro (Motoharu Ueki), who takes to following Genpachi (both kids are the children of Chiezo Kataoka, by the way).

They all seem innocuous enough and a varied representation of Japanese society of this period. Add a high profile absconding thief also known to be travelling along the same route and an air of mystery is injected into the proceedings but it is so subtly done that it is easily missed. If this all sounds a bit Ozu-ish, the man himself was one of many top Japanese directors who helped their friend Uchida make this film and resume his career.

In the early going, Uchida focuses on the first few stages of the journey to Edo and introducing the characters, but cleverly never reveals their true purposes. For example, Kojuro is forced to share a room at an inn with Tozaburo and suspects he may be the thief due to his nervy disposition and close protection of his money. This is dispelled later on when the thief is finally caught and Tozaburo’s tragic story takes centre stage.

Yet the catalyst for Tozaburo’s heartbreaking skein is the fate of Otane, who we learn is to be sold into prostitution by her poor family, something she has taken in her stride as her filial duty but shocks everyone else. These two strands are beautifully woven together and lift the mood from dour tragedy to a heart-warming sense of hope and faith in humanity, which Uchida uses by way of reiterating his main theme of character over status.

There are further examples of this to follow as Uchida takes a veiled swipe at various courts of power, from the pomposity and snobbery of official ruling bodies to the entitled arrogance of the samurai. Yet his most potent attack is through humour, via a funny but arguably puerile gag – while three travelling feudal lords are having a roadside tea break, young Jiro, suffering from diarrhoea, relieves himself in the grass banks next to them, creating a pungent odour that each lord thinks belongs to the other.

So, what does all of this have to do with a bloody spear? The honest answer is nothing but Uchida is not be vilified for this because it all makes sense in the final act, returning the focus to the dichotomy of the caring samurai and his loyal vassals. The story has already taken many unexpected turns so one more won’t hurt and this is where Uchida drives home the moral of his story with bitter poignancy.

A year earlier, Akira Kurosawa covered some of the themes here in his seminal classic Seven Samurai but took 3 ½ hours to do so; Uchida tells his story in just 94 minutes. That is not to suggest Bloody Spear is a better film or Seven Samurai is worse, only to show that some directors are capable of conveying their thoughts and offer provocative entertainment in a precise manner and not lose anything in their brevity.

I must confess to not knowing about Uchida before viewing this film and it seems that many of his works are no longer extant. This title is one of the first, I believe, to gain a UK release and the HD transfer is superb, crystal clear yet rich with the mugginess and atmospherics created through its monochrome veneer.

Regarded as one of Uchida’s greatest works, Bloody Spear At Mount Fuji is a truly magnificent film with a pertinent message still relevant today, given the chance to win over a new audience of cineastes and possibly create renewed interest in this overlooked director.

Satire and mordant commentary has never been so polite yet so devastating.