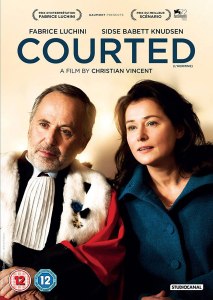 The English translation of this French courtroom drama suffused with rom-com elements is a pun, while the French title refers to the ermine lined robes judges wear. What does this have to do with anything? This is a problem with Courted – it unites two disparate genres that run in complete oblivion to each other with no clear endgame in sight.

Michel Racine (Fabrice Luchini) is a feared and somewhat teased judge, known for his humourless brusque manner and occasional harsh penalties. When choosing the jury for his latest trial, Racine is shocked to find one of them is Ditte Lorensen-Coteret (Sidse Babett Knudsen), a woman with whom Racine has a past. In between the court sessions, Racine tries to ingratiate himself to Ditte again but she may not be as willing.

Yup, that really is the gist of the plot although it is of course a little more involved than it reads. This is one of those rare occasions where the incidental details are more exciting than the plot, but this results in the main story being so functional that it is doesn’t appear to amount to anything. In other words, this could have served either the court case or the romance exclusively but together they negate each other.

I must confess that I’m not familiar with Christian Vincent but he has a sparse catalogue for a director with a 30-year career to his name, and that includes a double César Award winning feature debut in 1990’s La Discrète. So it is a bit baffling that someone with this pedigree could make a film like Courted, which isn’t a bad film but is a little…aimless, I suppose.

Or maybe I am missing the point because the romantic aspect is incredibly subtle and almost underplayed, a flagrant subversion of what is usually one of the easiest plots to go overboard with. Vincent dispenses with the usual gratuities the conventions of the genre relies upon, right down to the situation actually being un-romantic, with the barest of frissons depicted, at least on Ditte’s side.

The story Vincent seems to be telling is that this is an obsession all in Racine’s mind and Ditte is not interested in reciprocating. The couple don’t actually reconnect properly until way after the 30-minute mark, and even then, the bulk of the revelation only references an accident Racine had and Ditte was the doctor who tended to him, her special way of holding patient’s hands doing more than raising his spirits.

By this point we should worry that Racine is a sad little man who misread a kind but innocuous gesture from a professional woman, and has dwelled upon it for too long. Was this the cause for his marriage break-up, or his renowned stern demeanour? We may never know but what little gentle comedy there is, comes out of this austere arbiter becoming a giddy lovesick puppy.

Surely though, the rules of a court of law are that there must be no connections between anybody on the jury, the benches, the counsel, or the defendant and plaintiff to ensure a fair and unbiased trial? Remarkably, this issue doesn’t arise in the script and isn’t acted upon by either Racine or Ditte, so it’s a technicality both have chosen to ignore and Vincent too otherwise we have no story.

On the other side of the coin is the juxtaposition of the trial itself to the awkward wooing attempts by Racine. A surprisingly dark and gruesome affair, 27 year-old Martial Beclin (Victor Pontecorvo) has been charged with kicking his 7-month-old daughter to death, but his story keeps, while the testimony of his wife Jessica Marton (Candy Ming) is also inconsistent and open to scrutiny.

Had this film been solely about the trial it could have been a compelling story concerning the entire process of questioning the witnesses, deconstructing their testimonies, the tactics of the defending and prosecution counsels and a character study of the principal players, including the jury. We are afforded enough of this to get us hooked in the case –  it is featured far more than the romantic subplot – but we are left wanting more.

It is, however, the most fascinating part of the whole film, giving the cast outside of the two leads to sink their teeth into something substantial beyond being mere supporting players. Vincent relies on a cinema vérité approach for the scenes involving the jurors, complete with an inquisitive moving camera and natural overlapping dialogue of the debates for added realism, standing in stark contrast to the clinical and polished presentation of Ditte and Racine together.

This might be a shallow point to raise but I found it curiously telling about Vincent’s dedication to authenticity – Sidse Babett Knudsen wasn’t heavily made up for this role, a typical treatment for an object of desire. Any make-up she does have is very understated and barely noticeable, with subtle increase in application as things progress but nothing excessive.

Making a refreshing change from the usual signposting of the leading lady by making her stand out from the others (which she does anyway but that’s by the by), it befalls to Babett Knudsen to rely on her natural charisma and poise to be believably desirable and she pulls it off, recalling the earthiness she displayed as the every woman PM in Borgen whilst adapting to the laid back élan of her French surroundings.

Fabrice Luchini, a long time collaborator of Vincent’s, essentially has two roles here in bringing out two distinctly different side of Racine, the prickly, professional judge and the lost boy in love with his unattainable angel. Luchini is great in both roles, able to maintain a consistency with the characteristic of Racine’s nervous fastidiousness.

Courted could have one of two ways and would have been a good film. It is still a good film but too short to do either story sufficient justice. A pleasant timewaster nonetheless.