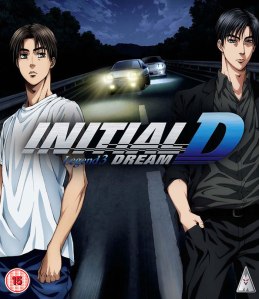 I hope you are all strapped in and have checked your rear view mirrors, as it’s now time to signal and pull away as we take off for this final instalment of the three-part Initial D film reboot.

Not a single second is wasted in getting into the action as the film opens with central protagonist Takumi Fujiwara in the midst of a race against a couple of hoons from the NightKids street racers gang, who he soundly beats and sends on their way with their tailpipes between their legs. The catalyst for this impromptu contest was the Night Kids mocking Itsuki Takeuchi for buying a SR AE85, thinking it was an 8-6, so Takumi showed them what this “slow old car” could do.

But there was another result from this race that was a little unexpected for Takumi – he finally found a new appreciation for cars and driving! Prior to this Takumi drive because it was his job as a tofu delivery man, and his father’s passion, yet pulling the kind of tricks he did in the 8-5 which he would do in the now famous 8-6 opened Takumi’s eyes up to what everyone else was feeling when driving.

This is a timely development, and arguably the only one to exist within the timeframe of these three films, which have rather lacking in the story department. Shuichi Shigeno’s original manga and the 1990’s TV anime presumably had more time to explore what three 60 minute films can’t, so it’s a case of beggars can’t be choosers – not that most fans will be watching for the story anyway.

After two films in which Takumi was simply winning his races because he could and not getting any enjoyment out it, this final chapter sees him gets serious as he is about to face his biggest challenge yet. At the end of the second film, Takumi received a bunch of flowers with which was a note from Ryosuke Takahashi of the Akagi RedSuns demanding a showdown.

Ryosuke still has designs on taking over the entire Kanto street racer scene, and with his younger brother Keisuke being an early victim of Takumi’s in a race, this is high stakes for the RedSuns leader. It’s not just personal and family pride that is on the line, Ryosuke has vowed to quit racing if he loses – a stipulation that often telegraphs the result in these kinds of situations.

Obviously, I am not going to reveal who wins, but I will say that it is one hell of a race, a tightly contested affair that could have gone either way. It takes up a good portion of the film’s final 20 minutes as it should, ostensibly being the climactic, marquee match-up that has been brewing since the first film, framing Ryosuke as the final boss were this a shonen fantasy.

Ironically, this is how the race plays out, just like a shonen battle with the onlookers and race spectators providing us with a running commentary explaining the nuances of the action and some of the various manoeuvres both drivers execute as the race becomes tighter. Along with Ryosuke’s inner voice delivering further expository monologues, this is pretty the Goku vs. Freiza of downhill racing in presentation and magnitude.

There is a wonderfully amusing moment before the race involving Takumi’s father Bunta, whose ambitions for his son are finally revealed and he gets behind the wheel of the 8-6 to test out his latest modifications. Like a Zen master, he pulls off a dangerously long “drift” whilst taking his hands off the wheel to light a cigarette. Bunta sees no peril in this at all whilst his passenger is seeing his life flash before his eyes.

A further attempt to add some colour to Takumi’s charmless personality is the return of his girlfriend Natsuki, who vanished after being introduced in the first film. This time she and Takumi actually go on a date and clear the air concerning an incident from their past, finally succumbing to their feelings. Ordinarily this would be an “about time” moment, but with it only being brought up at this late stage, its impact on the story and the audience’s investment is negligible at best.

With the story being the weakest aspect of the two previous films, it is something of a frustration to see so much of this character building material end up crammed into this final instalment when it would have been better served as steady subplots in the prior outings. This also expose the folly of trying to tell a sprawling story within the limitations of three 60-minute chapters and not allotting the time more proficiently.

However, like its predecessors, this is all mot because the real attraction is in the action, and with three races and two practice sessions there is a lot on offer. The final race is this series’ biggest triumph in terms of visual and technical prowess through employing cinematic techniques and different camera angles to capture the excitement of the race from a multitude of perspectives.

From inside the pursuing car looking out at the leader, to close-ups of the wheels spinning ferociously or the gear stick being wrenched, we are given a bird’s eye from all angles, heightening the intensity and drama of this high-octane adrenaline rush. The sound design again is excellent, capturing every crunch of the road, every squeal of the tyres and every burst of energy from the pistons, consolidating this as a truly immersive experience.

Saving the best until last, this is a fantastic way to end this three-film series and easily the best one, making up for the shortcomings of the other two if a little too late. But let’s not be too hasty as a post credits scene suggests there is more Initial D to come. We know the manga has much more to offer, we’ll have to wait and see if it ever becomes animated.