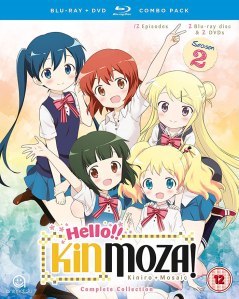 You might not realise it but the cutesy slice-of-life series Kinmoza! has something in common with notorious shocker Legend Of The Overfiend beyond both being anime – that is both have made an impact on the mainstream media in the UK.

Granted, the reasons are vastly different: Overfiend was named and shamed as one of those “filthy Japanese cartoons” corrupting youngsters back in the 80’s and early 90’s, whilst Kinmoza! Made headlines through Japanese fans of the show making a pilgrimage to the Wiltshire B&B which was the inspiration for the English house in the series.

Whether that helps DVD/Blu-ray sales of the show here in Old Blighty, it’s nice to see anime get positive exposure in mainstream UK press for once, and with the second series of Kinmoza!, with added prefix Hello!, hitting our shelves, this is a bit of publicity Animatsu/Manga Entertainment must be thanking the media gods for.

Season 2 picks up pretty much where the first left off, with British exchange student Alice Cartelet and half-Japanese Half-British Karen Kujo now fully immersed in Japanese high school! It is a new term and Alice finds herself in a different class from her friend and Japanese host Shinobu which is tearing the pair apart emotionally, although they live together so it’s not like they’ve been separated for good.

Luckily Alice has Yoko for company whilst Shinobu has Aya and Karen and they do get together at breaks so there really is no fuss, but the tone of the show is moe so having Alice and Shinobu be so lost without each other is probably a ploy to make the hearts of less cynical viewers melt with empathy for the adorable duo. Fans of the first season will know this manipulation is laid on pretty thick and little has changed for this follow-up.

Not that this prevents the group from getting up to their usual shenanigans at and away from school, this time around taking in some of the traditional Japanese activities they didn’t get around to in the last season. And yes, that means the obligatory trip to the beach episode, which also means shopping for swimsuits! But don’t worry fan service is definitely off the agenda, but every other cliché is present front and centre.

Some new faces join the fold for the new term, one being shy classmate Honoka who has a thing for blonde hair and unlike the others, gravitates towards Karen over Alice. Honoka is too scared to approach Karen but gets an introduction to her after bonding with Shinobu over their blonde hair fetish. Honoka isn’t an inclusive member of the main group per se but does feature regularly enough to become involved in their activities.

The other major new character is Akari Kuzehashi, the new strict homeroom teacher who manages to ruffle the ebullient Karen’s feathers on the first day. Fearing she’s made an enemy Karen pulls out the stops to get Miss Kuzehashi to like her but instead incurs further grief. In fact, Akari wants to be liked by the students but believes as the adult she has to be firm and professional, the exact opposite of Sakura Karasuma, the cheery teacher who openly discards the rulebook and cuddles Alice like a doll!

It’s a little hard to know what message is being relayed here – that being professional means risking being disliked, or openly sacrificing your moral duty and dignity because you have a kawaii fetish is a perfectly admirably quality? I know, it’s anime we shouldn’t take it seriously, and is does provide some cute laughs and ridiculous situations but just for a second let’s look at how Kinmoza! is meant to a gateway to England for the Japanese and a gateway to Japan for us.

Sticking with this observation, there is one personal bugbear carried over from the first season and that is how Alice and Karen, despite being British, carry themselves in exactly the same way as their Japanese friends. Again, I know it’s fiction but the selling point of the show is the cultural assimilation of the Brits in Japan but they don’t “act” British.

This will be because the Japanese don’t know how a British person acts thus it is easier to for them to assume it is no different from how they would act, react and adapt to a situation. For example, when Alice is teased about her tiny stature for a 15 year-old, she and Yoko decide to become delinquents to make themselves look more mature; yet Alice becomes a Japanese delinquent and not the British version which would surely be her default reference point.

Along with the typically stilted delivery of the English dialogue complete with unnatural syntax, the perception of the quaint pastoral English lifestyle of tea and scones (even for kids) is employed by way of differentiating between the two worlds, yet the only real distinction is the location setting. When Alice and Karen return home for a week, they continue to talk in Japanese, explained as the girls being too used to living in Japan.

Obviously the real reason for this is to make it easier for the Japanese voice actors, and it is not like anime hasn’t been set outside of Japan yet features a cast fluent in Nihongo, but the nature of this show as an educational tool via cultural exchange, this would have been one facet that requires a little more verisimilitude and the same attention to detail as the luscious artwork replicating of the aforementioned B&B.

Yet, this didn’t totally spoil my enjoyment of Hello! Kinmoza!, as niggling as these points are. Despite the helium voices grating after a while, the amiable cast, silly humour and endearing charm are strong enough to win over the most hardened viewer. Taken as a vibrant piece of confection, Kinmoza!’s lack of depth is not enough to cause any serious offence, and at least it won’t be mistaken for Legend Of The Overfiend any time soon.