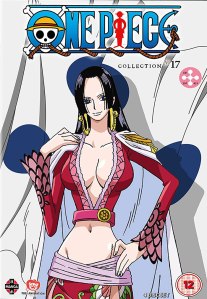 It’s been a while since we last set sail aboard the Thousand Sunny with the Straw Hats – fifteen long arduous months of waiting in fact! I say arduous as the last volume ended on an almighty cliffhanger in one of the cruellest cases of leaving us hanging in suspense since the shocking climax of the first season of Code Geass.

With such a painfully prolonged silence after the release of volume 16, it did seem like we might possibly be left without a conclusion forever like other shows ceasing mid-run (MAR, Blue Dragon, D.Gray-Man) until Manga Entertainment finally announced just last month that their UK releases of One Piece would continue! Phew!

A quick recap of the main story is in order – The Straw Hats have landed on Sabaody Archipelago where the plutocratic Celestial Dragons bully and torture the lower classes with impunity. A mermaid named Clamie has been kidnapped and put up for auction for the Dragons, prompting Luffy and co to rescue her. Clamie’s best friend, Octopus man Hatchan had been shot by a Dragon, driving a furious Monkey D. Luffy to ignore the rule about the Dragons being untouchable and lamps him!

Despite the extended absence from our screens, the sight of Luffy and co. uniting as one to kick some nefarious butt welcomes us back into the crazy world of One Piece with an immediate sense of familiarity that it barely feels like there was a gap. Like slipping into a comfortable pair of slippers, we are able to immerse in the spirit of things with ease even if the key details might take a while to return to us.

As per the protocol of Sabaody, any act of recourse or aggression towards the Dragons is considered an act of war thus the World Government Navy is called in to defend the Dragons. Already old foes of the Straw Hats and other pirates with huge bounties known as the Eleven Supernovas, this leads to a mammoth Free for All where the marines are given what for in a variety of ways before they even get to the Straw Hats.

In the last volume it did suggest the Eleven Supernovas would be the next feud for the Straw Hats, but instead the arrival of Admiral Kizaru brings the various factions together – his Devil Fruit ability of being made of light and his destructive kicking power demands a united front, yet the only person capable of stopping Kizaru is Silvers Rayleigh, an old man who once rode with Gold Roger himself.

But Kizaru isn’t the biggest threat to the pirates. The Bible carrying behemoth and one of Seven Warlords that is Bartholomew Kuma – three version of him in fact – who does the unthinkable and singlehandedly wipes out the entire Straw Hats group! Massive spoiler right? Technically yes but somewhat necessary as this occurs halfway through this set and to discuss the remaining episodes his is required to put them into context.

What is notable is the sheer depth of emotion Eiichiro Oda gets from this scenario as one by one the Straw Hats are eliminated, each remaining member looking on in helpless horror. It is a potently devastating watch yet we now it can’t be the end (not in the last because there are still two discs left to watch), but its impact is palpable.

Yet, in true anime fashion, this gut-wrenching low is immediately followed by a light-hearted and easily skippable two-episode filler arc before resuming the story again in a more humorous vein. The fate of the individual members of the Straw Hats is now the focus, with Luffy’s arc giving the bulk of the attention thus far, whilst the others only get to share an episode each.

That is not to say that we won’t revisit them down the line but it does appear that Luffy, true to his endearing indomitable spirit, is the driving force behind a possible reunion with his geographically widely dispersed crew mates, and with a major new character and potentially crucial ally introduced in the form of narcissistic Amazonian Snake Princess Warlord Boa Hancock, this is a minor quibble for now.

Amusingly Luffy and Sanji end up in similar situations but I doubt Sanji would have been able to survive Luffy’s predicament due to their differing attitudes towards women. However, it is worth noting that anyone easily offended by certain politically correct gender issues might find Sanji’s arc hard to digest without allowing for the concession that this is Japanese and the episode is 9 years old.

Of the individual arcs, Robin’s is the only one thus far not played for laughs and has the potential to provide the most satisfying story of them all, giving the empathetic drama that drives it. Franky’s situation could prove entertaining as could Zoro’s if he ever gets his swords back, while coverage of Ussops’ and Brook’s predicaments are so brief I’ve actually forgotten what they entail!

How much mileage one gets out of this latest direction will depend on who your favourite crewmember is. At the moment, Luffy is still in the main spotlight but the idea of giving everyone a chance to explore their individual skills and ability to survive alone makes for a welcome change of pace. This might even sway your negative opinion of a certain character you previously disliked if they are given the chance to shine independently.

Even though it may seem like I’ve revealed a lot of plot development in this review, I’ve barely scratched the surface – that is how busy the action in this collection is. Very helpful is the Marathon Play feature that skips all the credits (but keep the recaps) knocking 20 minutes from the run time.

One Piece is most definitely back in a big way with another outstanding and diverse set of episodes, feeling like it has never been gone. Let’s hope volume 18 isn’t too far away.

One Piece In The Booth With Sonny Strait

A Day In The Life Of ZZZZoro