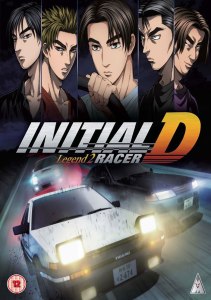 Start your engines folks, it’s time to get back behind the wheel and count the revs as we set off for a second helping of Initial D, with part two of three part film reboot of the classic franchise created by mangaka Shuichi Shigeno.

Wasting no time in resuming the story after the first film Awakening concluded with the arrival of Takeshi Nakazato, leader of the Myogi NightKids, to Mount Akina. With word about the victory of the mysterious 8-6 spreading among the race community Nakazato’s first order of business is to challenge Ryosuke Takahashi of the Akagi RedSuns to a downhill race which he wins, boasting he can also beat the 8-6 in a race, which Ryosuke openly mocks.

Rattled by this Nakazato arrives at the petrol station where Takumi Fujiwara, driver of the 8-6, works instead finding his feckless colleague/school friend Itsuki Takeuchi, who unwittingly accepts Nakazato’s challenge by proxy. Despite his obvious skills behind the wheel Takumi still harbours no real desire to race or show the same passion for cars as everyone else but the pride and reputation of the Akina Speedstars is also at stake.

As storylines go there isn’t really much depth to Racer or indeed to this film series as a whole thus far. Much like sports dramas, the concept of car races doesn’t lend itself to overarching drama like other genres, limiting its appeal to the speed contests which can only really go one of two ways for our heroes. And being a trilogy of films, if there is a loss in one film, redemption is achieved in the next, something I assume the original TV show was able to cover in greater depth with more time available to it.

Yet, and forgive the spoiler, this doesn’t appear to have been much of a consideration for Shigeno as the 8-6 so far hasn’t lost a race, and in the instance of Racer Takumi is involved in two contests, which for action fans means a double helping of high octane, tyre-screeching, adrenaline fuelled mayhem; for those of us in need of something a little more substantial to latch onto, the drama doesn’t extend beyond this particular purview.

If the film ran longer than an hour then they could have found the time to inject some character development for both the antagonists and protagonists in these films; as it stands, we essentially have instead a trilogy that has already established itself as following the “Villain of the Week” formula of a weekly TV show. Takumi’s reluctance to embrace the world of racing remains a focal point of his personality but his insouciance has yet to be quantified, making him a reluctant hero who is difficult to root for.

Suffering the same broad brush strokes to paint his character is Nakazato as the chief adversary in this instalment, little more than an over-confident ego in a flashy GT-R, in which he believes is sufficient to beat the 8-6, along with the Grip Racing technique he boasts is superior to mere drifting.

What is Grip Racing? I’m the last person you should ask but it appears to involve less skidding than drifting which is why Nakazato is so confident he has the advantage in a downhill race. But Takumi is a racing wizard and the 8-6 is a powerful car so this should be no problem for him, but in one of the story’s more understated elements, it is not just about the skill of the driver or the speed of the car.

One of the more enigmatic cast members is Takumi’s father and owner of the 8-6 Bunta, he of the squinty eyes and laconic demeanour that hides a sagacious mind and apparent sixth sense when it comes to cars. Upon learning of the race against a Grip Racer, Bunta takes the 8-6 away for a while, returning to Takumi at the last minute; during the race Takumi notices some subtle differences in the car that aid in his victory and provide a counter Nakazato’s techniques.

This is where the script satisfies the geeky side of the petrol heads watching as it goes into full on Top Gear mode by explaining in detail the intricacies of the adjustments made to the 8-6, as well extolling the virtues of the car’s inner workings and those if the GT-R. If knowing things like the horse power, suspension, revs and such is important to you then you have been served well by the writing here.

In the second race, Takumi is challenged by Shingo Shoji, also of the Myogi NightKids, to a Duct Tape Death match, where the driver’s right hand is taped to the steering wheel. Shoji is not just looking to avenge Nakazato but if he wins he takes over leadership of the NightKids. Shoji drives a Honda Civic SiR II EG6, if anyone is interested. A red one.

Just like before, the race animation is exemplary, buttressed by excellent sound design that not only captures the roar of the engines and squeal of the tyres but also the subtle extraneous sounds created by the fast moving vehicles. The human figures are still rather stiff with too many confusingly indistinct in their look, whilst the cars are dutifully replicated here.

And like the first film, this one ends with Takumi receiving a bunch of flowers with a card bearing a cryptic message which naturally is a potential challenger for a race against the 8-6. But we’ll have to wait until next time to see who it is from and how deadly a threat they pose to our hero (and what car they drive).

What I am certain of however, is that there may not be many surprises in part three if the inertia concerning character and story development in Racer is carried over, let alone whether a satisfying conclusion will be on the menu. For now, this is another visually pleasing slice of wheel-spinning mayhem that speed freaks can live vicariously through.