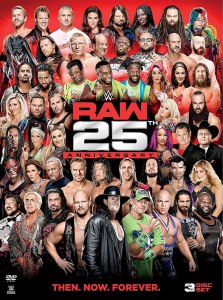 As the title of his release explicitly states, 2018 marked the 25th anniversary of Monday Night RAW, the WWE’s flagship TV show, supplanting WWF Superstars of Wrestling and to a lesser extent WWF Wrestling Challenge as the main platform for all of the big angles and matches.

On January 11th 1993 the first episode of RAW was broadcast on the USA Network, replacing the long running magazine show Prime Time Wrestling and broke the mould by not only featuring a whole card of first-run “superstar” matches on free TV but was also live. Aside from special events, wrestling rarely aired live on TV in a weekly capacity and RAW was the first show to do this.

Well, sort of – actually, the first show would be live then they would tape a further three weeks of TV in one sitting (the standard practice of the time, which they still employ for NXT to this day). It wasn’t until 1997 after WCW Monday Nitro – which WAS live every week – had been thrashing RAW in the ratings that Vince McMahon extended it to two hours and would be live every alternate week, taping the following week’s show the next night.

In late 1999 when Smackdown was created, RAW finally became a live weekly show by which point they had regained the lead in the ratings over WCW, and in 2012, beginning with the 1000th episode that RAW permanently extended its run time to the laborious three-hour show it is today. Despite Smackdown also being live in the wake of the second brand split in 2016, RAW is still considered the flagship show of the WWE.

So, how did the WWE celebrate this milestone event of RAW becoming one of the longest running episodic shows on US TV? This DVD answers that question presenting the entire 25th anniversary show that aired on January 22nd (yes, two weeks late) in this three disc set along with some extra features that tie-in with these celebrations.

The anniversary show takes up the first disc and was a three-hour show that emanated from both the Barclays Centre in Brooklyn and the Manhattan Centre in New York where RAW was originally held. Throughout the show, they would switch between the two venues with matches and skits featuring current stars and faces from the past 25 years. The then current announce team of Michael Cole, Corey Graves, and Booker T were in Brooklyn, whilst Jim Ross and Jerry Lawler represented the old school at the Manhattan Centre.

Like many ideas, this sounded great in theory but not so much in execution, especially for the fans at Manhattan Centre. For most of the evening, they had to watch the Brooklyn show on the big screens with only a few segments occurring in their venue, and during the ad breaks, they would rush of the Cruiserweights for a match which would last barely three minutes.

Whilst they did get the Undertaker’s first appearance since his assumed retirement at Wrestlemania 33, the (100th) DX/Kliq reunion and to very brief matches (Bray Wyatt vs. Matt Hardy/The Revival vs. The Club), suffice to say, the Manhattan crowd weren’t so happy about being ignored for most of the night. As a goodwill gesture, after the live cameras stopped rolling, the WWE sent some of the current wrestlers over from Brooklyn to Manhattan, one instance of which you can see in the extras on disc one.

Meanwhile at Brooklyn, the show kicked off with Big Steph (creepily playing a babyface) and Shane (the brand wars seemingly in a state of truce), then bringing old man Vince out to receive a plaque for creating RAW. Of course, Vince turned heel on the crowd which brought out a certain Texan with a penchant for beer to put him in his place.

Roman Reigns (boo!) defended his IC title against The Miz and the RAW women got involved in a scrappy Eight Women tag match ahead of the Royal Rumble a few days later. Most of the “legends” appearance took place at Brooklyn too, some in backstage skits (APA, Ted DiBiase, MVP, Brother Love, Teddy Long, Ric Flair, Chris Jericho, etc), others in themed segments in the arena like the women of RAW and former general managers.

Christian held a Peep Show with then RAW tag champs Jason Jordan and Seth Rollins and The Bar, Elias and John Cena collided with each other, and the night was capped off with a quick and bathetic brawl to hype the Universal Title match at the Royal Rumble between Brock Lesnar, Braun Strowman, and Kane.

To say this show underperformed and was ultimately a disappointment given the weeks of hype leading in to it is an understatement. Perhaps it is because a lot of it was a rehash of previous celebration shows, like the deplorable RAW X fiasco of 2003, the Old School shows and RAW 1000. Some of the nostalgia was nice, but as above, the same old faces are brought out lessoning their capital as legit surprises, whilst the matches weren’t much to text home about.

In justifying a three-disc release, the second disc is made up of the 40-minute RAW pre-show, a WWE Network exclusive hype event similar to those that precede PPVs, and the Top 25 Greatest Moments of RAW countdown, spread over disc two and three. This list features the segments in their entirety running almost five hours in total – that is a LOT of memoires and history to devour and arguably is more satisfying than the anniversary show.

Depending on how much of a completist and uber-WWE fan, the addendum of the little seen pre-show and the Top 25 list might be enough incentive to shell out for this release, otherwise those who saw the show when it aired may want to spare themselves the torture of reliving it.

I won’t end this review on a churlish note however, so a belated Happy 25th Anniversary Monday Night RAW!