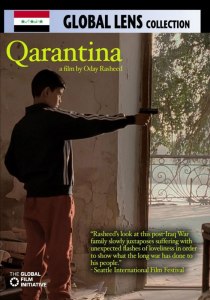 There are a number of ways someone can feel trapped beyond the physical restrictions of space and proximate geographical enclosures – one can be mentally or emotionally trapped in a loveless marriage, or trapped by their limitations of skills and abilities. In his second feature, Iraqi writer-director considers this and more in holding a mirror up to his country’s troubled society.

In a small derelict two-story building lives an impoverished family, consisting of grumpy patriarch Salih (Hattam Auda), his daughter Meriam (Rawan Abdullah), second wife Kerima (Alaa Najem) and her young son Muhannad (Sajad Ali), whilst in the floor above is aloof loner (Asaad Abdul Majeed), an assassin whose employer is paying for his rent, for what it is worth.

What little money the assassin throws their way comes from the cleaning and sexual favours he gets from his affair with Kerima, while additional income is from Muhannad’s shoe shine business when he’d rather be at school. Complicating matters further, Meriam hasn’t spoken for three days and is refusing to eat which is annoying her father, his lack of sympathy further upsetting the others.

Rasheed’s film is only tacitly metaphorical for those of us outside of Iraq unfamiliar with its current socio-political environment but its tale of hopelessness within this struggling urban precinct in Baghdad carries an international resonance. From the POV of the US armoured tank patrolling the streets to the crumbling walls and rusty metal gates surrounding the buildings, the scope for movement for these people is very slim.

Emotionally they are trapped by their behaviour, shortcomings and decisions they make each one unwittingly spilling over into the lives of the others, providing the more scathing target for critique in Rasheed’s commentary. Judging Rasheed purely on this film, I infer that he is a modern thinking man, intent on challenging the antiquated and oppressive aspects of his country’s interpretation of Islam.

An early scene has Salih complaining that Meriam isn’t wearing her headscarf while a stranger is in their midst, causing Kerima to point out he should be more concerned with his daughter’s health. We also get the impression the nameless assassin couldn’t give two hoots anyway. Later on, Salih brings his devout sister to look at Meriam, who concludes she is possessed and impregnated by a mute devil and conducts an exorcism on her!

The truth is less dramatic, more natural but far worse and Salih’s denial of the problem implies guilt on his part which Kerima either suspects or knows for certain, hence her affair with the assassin, which she regrets anyway. For Kerima this is her only release but she is stuck between two men she hates, a love triangle which again is symbolic – Salih of the stuffy old guard and her lover being the younger, fresher more exciting alternative.

Of the main characters, the assassin is a curious chap in that he doesn’t outwardly appear that dangerous, keeping to himself and not wishing to be a bother to the family. Yet, he breaks rank and shoots a local university professor in a shop in broad daylight instead of waiting for the planned hit later in the week. Then, after hunting down his old college friends – one his old flame, the other now her husband, both science lecturers – he guns his love rival down out of spite.

What seems to drive the assassin is rather ironic, given that he believes he has achieved freedom by leaving the old town behind, yet is bound by the limits of being a gun for hire with a boss calling the shots no less. In other words, being slave to the system or held back by duty is not tangible freedom in his eyes, leading to his most callous hit the rationale behind which, in his mind, is relieving a burden.

It’s hard not to recognise the relentless bleakness and desperation of the narrative, one stubborn day after another, each character heading on a road to nowhere either through their own doing or simply through circumstance. Representing both ends of this spectrum, you have Salih bullying his family to reassert his masculinity having been emasculated by the presence of the assassin; and Muhannad clutching to a maths text book, his only symbol of a better world he wants to be a part of but can’t.

Remarkably the film ends not on a tragic or depressive note but a hopeful one which, in lieu of everything that has preceded it, is worthy of triumphantly punching the air even if it is a premature celebration of victory. As to who is being represented here – the downtrodden people of Iraq or the country itself – is open to interpretation but it is welcome denouement and the rightly provocative under the circumstances.

The story might be a depiction of daily struggles yet ironically making the film was beset with problems of its own. Apparently, when it came to the post-production process the sound was missing and had to be rerecorded from scratch, with financial help from SANAD (Abu Dhabi’s Film Fund) – not that it shows, so kudos to the editing and sound mixing teams for their flawless reconstruction of Rasheed’s work, and the uniformly excellent cast for hitting all the nuanced marks of their performances for a second time.

For a low budget work employing a cinema vérité approach to the intimate camera work, the shot compositions are strikingly thoughtful and often poetic, given the indigent state of the locations, in particular the main housing block, have little aesthetic pulchritude to offer. The power is in the atmospherics – a simple shot involving the shadows formed by the light through a swaying red curtain creates a beautifully efficacious psychedelic tableau.

It really is not until the end credits roll that the power, intelligence and relevant potency of Qarantina hits home – only then does one realise they have just watched a remarkable film that says so much whilst seemingly doing so little.