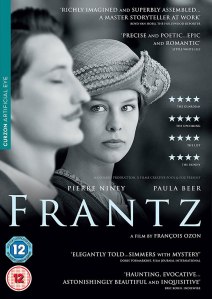 Some might consider remaking a film by the legendary Ernst Lubitsch as a bold move (although it’s already happened with Mel Brooks in To Be Or Not To Be) but François Ozon has never been afraid to defy convention. Luckily he chose a lesser-known Lubistch film to update, 1932’s Broken Lullaby, which itself is based on the 1930 play L’homme que j’ai tué (The Man I Killed) by Maurice Rostand.

In 1919 with the end of World War I still fresh in the air, a young German woman, Anna (Paula Beer), visits the grave of her fiancé Frantz Hoffmeister daily to lay flowers on it. One day she finds a fresh wreath there, laid by a French man, Adrien Rivoire (Pierre Niney), who claims to be a friend of Frantz back in Paris during the war. Anna invites Adrien to meet Frantz’s parents, Hans (Ernst Stötzner) and Magda (Marie Gruber), to assuage their fears that their son had a horrible life on the front line.

However, Adrien is wracked with guilt as he is in fact the soldier who shot and killed Frantz, eventually breaking down and revealing all to Anna after the kindness and hospitality shown to him by the Hoffmeisters. Ashamed, Adrien returns to France but having charmed Anna, she follows him to France to tell him she has forgiven him and experience everything Frantz did in Paris.

The painful effects and suffering of war don’t end once a cease fire has been called, they linger on for quite some time afterwards as the gravity of the losses continue to resonate for the loved ones left behind. Ozon has used the template of Lubistch’s film and Rostand’s play for this sobering essay on guilt, grief and forgiveness, whilst playing the patriotic card from both sides of the conflict.

It may be a more familiar sight for the Germans to be on the receiving end of hostile resentment and open disgust but Ozon shows us how the feeling was more than mutual wherever you went. To say Adrien wasn’t given the warmest of welcomes in Germany is an understatement, even if he was fluent in the language, and this extended to the Hoffmeisters in allowing the Frenchie into their home.

With such perspective necessary to relay just how deep the pain senseless loss reaches, Hans is compelled to remind his obstinate compatriots that the French lost their sons in battle too, and if anyone is to blame it is them for sending their sons to enlist. This could have been an overcooked scene with a rousing musical score and emotive acting but instead, Hans is calm but resolute in his speech with is more effective and resonant, especially in shaming the others into silence.

Anna receives similar, if less antagonistic, treatment in France, the most troubling being to sit through a rousing impromptu rendition of La Marseillaise in a coffee shop. Her biggest challenge comes when meeting Adrien’s family but not in the way you would expect in another example of Ozon moving the story in different directions to wrong foot the audience’s expectations.

This is most evident with the chilly monochrome imagery that gives way to a soft colour palette for the flashback scenes rather than the other way around, the sort of trick you’d expect Xavier Dolan to pull only with a reason for doing it. These scenes mostly involve Adrien and Frantz, suggesting a possible homoerotic edge to the fantasy, but Adrien’s sensitive and passive demeanour doesn’t put this out of reach of maybe being a repressed fantasy.

But this doesn’t go anywhere since Adrien predictably falls for Anna and apparently the feeling is reciprocated but this is another card Ozon plays close to his chest, keeping it ambiguous along with the inference that Anna sees Adrien as a sort of proxy-Frantz based on the convincing stories Adrien tells through not being able to be upfront about his identity.

Adrien’s skilful painting of such warm and vivid pictures of his phantom friendship with Frantz explaining why Anna doesn’t reveal the truth to the Hoffmeisters, seeing them no longer carry the weight of anxiety and sorrow, accepting Frantz’s death as a tragic casualty of bigger situation. Not that Adrien was a bloodthirsty killer either, his role in this making him as much a victim as Frantz was, an underlying message of this tale even the austere black and white imagery can’t undercut.

Moving to Paris for the second half is where Ozon deviates from the source material. Aesthetically it fits in with what preceded it but the gentle whimsy and suffused parochial tension is replaced by a whistle stop tour of France as Anna searches for the elusive Adrien. In providing closure it works well, but Adrien’s revelation and the immediate aftermath feels more like the natural conclusion, rendering the ensuing 45 minutes as more of a protracted coda.

One thing never compromised by this change of direction are the performances, lead from the front by two excellent turns from Pierre Niney and Paula Beer as Adrien and Anna. Niney’s gangly frame and sharp features reinforce the nervous guilt behind his unintentional ruse, juxtaposed by the confident, dignified poise of Anna belying Beer’s 21 years of age.

Visually the film is arresting and the switch between black and white and colour is not an overplayed gimmick but a subtle narrative tool, but the big surprise is Ozon’s direction. His usual peccante edge and sense of defiance isn’t present, instead we find the French provocateur being respectful to his subject, keener on gently coaxing our emotions out and not ripping them from us.

Frantz has all the requisite ingredients of the big prestige film Ozon was probably aiming for, and he almost achieves this, had the second half not drifted too far from the subtle and poignant anti-war polemic of the first half. Still an easy recommendation for film fans looking for a different and sensitive take on post-war life.