Well this is something different for this site. S.G of Rhyme and Reason has tagged ol’ MIB in this blogging game called five Flaming Hotties, where bloggers are asked to share their main objects or desire from the film and entertainment world.

Now, regular readers of this site (and hopefully a few occasional visitors too) will know that I can’t resist a pretty face but being a film fan I also appreciate their talents as much, which makes compiling this list a little awkward. If it was base purely on sexual attraction and hopeless adoration on my part this would be a list largely comprised of Japanese gravure models with the odd actress, singer or female wrestler thrown in for good measure.

Before we get to my list there are, as ever, some rules that need to be adhered to when participating in this project:

I must confess that despite having personal favourites, “ranking” women based purely on their looks isn’t something I am comfortable with doing as they all have something that is alluring and attractive to me, so my list is NOT in order of preference.

With that out of the way let’s meet some of the ladies that make MIB’s heart flutter like a swarm of butterflies (click images for full sized version):

I have grown to distrust the adjective “beautiful” thanks to the media’s overuse of it as a default description for any famous female. But I am willing to allow special dispensation for, in my opinion China’s finest export of the past two decades. Zhang Ziyi first came to my attention as the feisty Jen Yu in Crouching Tiger, Hidden Dragon but it was as Mei in House Of Flying Daggers that she truly mesmerised me, remaining a firm favourite ever since. Her porcelain skin, round features and alluring eyes are swoonsome enough but let’s not forget that Zhang is a fantastic actress too. 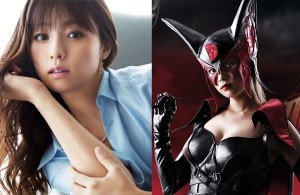 There are many Japanese actresses that make for heavenly figures but Kyoko Fukada has that special fragility about her that is pure and wholesome, yet there is a woman of substance behind her soft appearance. In Kamikaze Girls she gets to demonstrate both of these sides as Momoko, then becomes the sexiest villain in all of cinema as Doronjo in Takashi Miike’s Yatterman. And Koyoko-chan is one of the very Japanese women who also looks great as a blonde!

I won’t lie to you – it’s the eyes and the cheeky, dimply smile that make this Gallic girl such a picture to adore. Tautou’s slight frame and pixie like features make you just want to cuddly her, and if you’ve seen some of her testing dramas like He Loves Me, He Loves Me Not, you’ll see how easily she can engender such protective feelings within you. She best known for Amelie but Audrey has proven she can adapt to period dramas too. 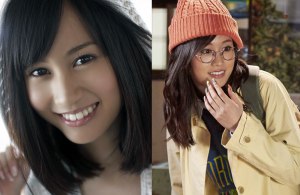 This is a surprise choice even for me, which may sound odd but when I received the invitation to join this game, Atsuko Maeda was one of the first faces to pop into my head. I had to overcome my bias towards Atsuko-chan for being a former member of the J-Pop hydra that is  AKB48, but in jumping across to acting, Maeda begin with low budget indie flicks and has stayed true to that. She has improved tremendously as an actress and her sparkling eyes and radiant natural smile is quietly endearing.

Another former pop singer, part of a duo called Twins with Gillian Chung, Charlene Choi is simply cute as a button. Her youthful looks have kept her playing ditzy teen-like roles even into the 30’s but recently Choi has been afforded more serious and pressing roles. I first saw Choi in Kung Fu Dunk and if I am being honest it was a still shot of her from the film that drew me to watch it, not the premise of martial arts meeting basketball. I regret nothing.

This was a surprisingly hard list to compile and my choices did change before settling on this final five, because I couldn’t find pictures that I felt suitably reflected how special they look on screen. As a matter of disclosure, this group might have included any one of Shu Qi, Ludivine Sagnier, Elena Anaya and maybe for nostalgia’s sake, Lynda Carter (aka TV’s Wonder Woman) and Meiko Kaji.

Not the full seven but most of my potential choices either have done it already or probably wouldn’t want to participate.

Anyway, thanks again to S.G for the tag and thank you for reading!