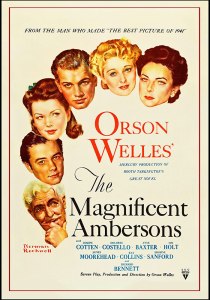 Having wowed everyone (except the paying punters) with his debut film, a little flick you might have heard of called Citizen Kane, Orson Welles felt he could do better with this adaptation of the novel of the same name by Booth Tarkington. And he may well have done, if RKO didn’t panic after a poor test screening and edit the film in Welles’ absence, butchering his grand vision in the process.

Despite sounding like a circus troupe, The Ambersons are a very wealthy family that practically owned a small town in Indianapolis. The lone daughter of the family Isabel (Dolores Costello) refuses to marry her suitor Eugene Morgan (Joseph Cotten) after an embarrassing public incident, instead opting for the charmless Wilbur Minafer (Don Dillaway), who Isabel doesn’t love.

Together they have a son, George, a spoiled brat whose arrogance and flouting of his wealthy status upsets everyone in the neighbourhood. Many years later after returning from boarding school, George (Tim Holt) falls for Lucy Morgan (Anne Baxter) at a ball held in his honour, but takes an instant dislike to her father. When Wilbur dies, Isabel and Eugene, also a widower, rekindle their relationship to the chagrin of George.

It is all very soap opera-ish – in fact, I’m sure a number of Aussie soaps boast the same storyline as its core premise – but given the original novel was written in 1918 this was the apex of high drama. But as we see in the film, this was more a commentary on the importance of change both socially and personally, shining the spotlight on those content with the status quo to their own detriment.

Set at the turn of the 20th century the biggest advancement to rock this small mid-western town is the invention of the horseless carriage, or the motor car to you and me. During his own absence, Eugene Morgan invented the automobile (apologies to Henry ford) and was looking to develop it further, fuelling the idea in George’s head that Morgan was trying to hit his parents up for an investment.

George isn’t shy of sharing this opinion, an odd way to woo someone’s daughter but his delusional arrogance prevents him from seeing this, so when Lucy rejects a proposal of marriage it is clearly her father’s fault! Nothing to do with George’s admission of wanting to live an easy life at his family’s expense and not waste energy working like plebs do, oh no.

As with Charles Foster Kane, Welles presents us with another self-obsessed egomaniac for our entertainment; unlike Kane, George doesn’t have the same charisma or magnetic presence to bend people towards his will, hence a central thread of this tale being George getting his comeuppance. Only Isabel continues to dote on her son and he intends to manipulate this in wrecking the relationship with Morgan.

We all know a mother’s love is a tough and sacred bond, but even the most devoted mother has to put own happiness first sometimes. This makes Isabel seem like a husk of a woman, her external glamour and swan like grace hiding a frightened duck out of its depth. This may be an accurate reading of Isabel or it may not – this version of the film was not the one Welles intended us to see.

Partly because he went over budget and partly because test audiences of teenagers(!) found the film too bleak and depressing (allegedly following the test screening a cheerful musical), Welles was tasked with trimming his 135 minute rough cut and make a few reluctant changes. This version again didn’t rate well but Welles held his ground, believing audiences needed to adapt to his darker vision of cinema.

RKO then sneakily sent Welles to Brazil to make a film as part of major political goodwill project and assumed control of the edit, reducing the run time to just 88 minutes and with a newly shot, happier ending. Moreover, any communication between Welles and the studio was ignored so his ideas were never incorporated resulting in a film that is stylistically Welles but tone wise very Hollywood.

Therefore, in relation to the presentation of Isabel’s character, there surely must have been more to her than the simple loving mother. Similarly, the subplot involving her downtrodden sister-in-law Fanny (a brilliant Agnes Moorehead) silently holding her own flame for Morgan is only danced around, never fully embraced as a vital issue within the family dynamic.

Suffering the most is the final act in which George does get his comeuppance, told through a rush of short scenes driven by the voice over narration from Welles himself, from which it is implied the bulk of the bleak plot developments were excised here. With the original footage destroyed and no existing versions of Welles’ cut known, we may never know how much more involved and impactful this would have been.

Putting aside this egregious cavil, there is a good film here even in its truncated form, but the weight of expectation following Citizen Kane proves as big a hurdle in being able to appreciate this on its own merits as RKO’s hatchet job on it. Visually it is another ambitious piece of dizzying camerawork, evocative composition and atmospheric use of shadows, and Welles gets a lot from his cast.

Welles also breaks with the old tradition of having onscreen text by reading the credits himself, acknowledging the writer, editor, costume and set designers before introducing the cast and finally himself. This ploy would become a staple practice on US TV for many years but in 1942 it was unheard of in Hollywood.

If The Magnificent Ambersons teaches us anything it is that Orson Welles was ahead of time, especially for Hollywood in the 1940’s, which is ironic when you consider how many of his ideas are now part of the filmmaking vocabulary. A good film that should have been a great one, it is no Citizen Kane but then again, what is?