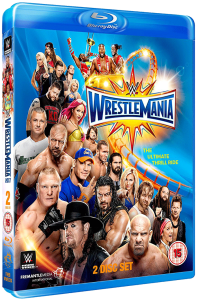 Wrestlemania 32 was wildly regarded as a disaster for running way too long, none of the major matches delivering what they should have and the booking sinking to new levels of mind boggling atrociousness.

Most people would have learned from this and made sure that the follow up wouldn’t be a repeat; unfortunately, Vince McSenile isn’t most people as his handling of the rejection of Roman Reigns demonstrates. The news that WM 33 would be another 7-hour event immediately sent alarm bells ringing while the card itself, designed to appeal to “lapsed fans” who only tune it to WWE for this show, has little to get excited over.

On April 2, 2017 the Camping World Stadium in Orlando, Florida (referred to as its old name of the Citrus Bowl on commentary because Vince hates the new name) a reported 75,245 fans (the real figure is closer to 65,000) from around the globe put their stamina to the test by sitting through this 100 hour event.

Your commentators for the main show are Michael Cole, Corey Graves and Byron Saxton for RAW, Tom Philips, JBL and David Otunga for SD, and the welcome return of Jim Ross for the main event. Ring announcing is shared between JoJo and Greg Hamilton along with some US TV host nobody on this side of the world has heard of for the mixed tag match. The New Day are “hosts” of the show which of course means absolutely nothing.

As usual, no results or spoilers in the match discussion but loads of opinion.

On the twelve hour pre-show, Neville defended his Cruiserweight title against Austin Aries in a very good match that should have been on the main card. The Andre the Giant battle Royale was notable for featuring wrestlers who had been gathering momentum (like Braun Strowman, Sami Zayn, Luke Harper, etc) whose main card spots were taken by part time veterans – not to mention the SD tag champs too!

There was also an amusing botch where a female security guard tried to stop a US football player from interfering in the match as he was scripted to do! Finally, shunted off the main card in favour of the SD Women’s match after fans complained of bias towards the RAW Women’s division, Dean Ambrose sleepwalked through an IC Title defence against Baron Corbin.

Onto the main card and first up we play “Spot The Non-Americans” as a pair of boobs hanging out of a red dress bellows the US National Anthem to the delight of 50% of the crowd.

The world and his wife wanted Styles to be in the main event challenging for the WWE title; Vince believes that having AJ face a member of the McFamily is a greater privilege than a title match. And to make matters worse this match opens the main show! Surprisingly, this is a decent effort, one of the better bouts on the show, with Styles carrying Shane O’Mac and bumping for his hideously sloppy and reckless offence, reminding us all why AJ Styles is Phenomenal.

The Best Friends split acrimoniously during Jericho’s Festival Of Friendship on RAW, which lead to Y2J costing Owens his Universal Title against Goldberg at Fast Lane. Fans wanted this match to be for that title but instead it was for Jericho’s US title. There was a lot of wrestling in a match supposedly built on betrayal and hatred but the pair worked well together despite struggling to follow the hot opener.

50% of the participants in this match stole the show at WM 32 (along with Becky Lynch). Will lightning strike twice? Bayley’s title win really should have been saved for this match but instead it occurred on RAW in early February, dragging the Charlotte vs. Bayley feud out. Nia Jax was both the wild card and the heavy baggage in this match, possibly explaining the elimination stipulation. Decent match overall but not on a par from last year’s.

The Hall Of Fame Class of 2017 is introduced next.

Wait…what? The Hardys are back? Having reinvented themselves as the Broken Hardys in TNA Impact Wrestling and the Indie scene, a return to the WWE was the last logical choice for their world domination programme, when the new owners of Impact Wrestling failed to renegotiate a new contract for their hottest act.

What some fans may not know is that the Hardys had in fact been in a ladder match against The Young Bucks at an ROH show the night before WM 33. Yup, two ladder matches in 24 hours! Originally a triple threat match, the Hardys were added as a last minute mystery team and the rest as they say…. Not a classic but still an enjoyable and often brutal stunt fest as expected.

For this year’s big “Wrestlemania Moment” they decided to take Cena out of the world title picture (wasting his 16th title run at AJ Styles’ expense) and finally acknowledge Cena’s real life relationship with Nikki Bella. Cena has another crappy film to make and Nikki needed neck surgery and they wanted to give both a happy send off so this match was essentially a back drop to have Cena propose to Nikki.

Not really much else to say about it except the vignettes of Miz and Maryse spoofing Cena and Nikki heading into this pointless throwaway match were hilarious. Hopeless romantic will enjoy the schmaltzy staged post-match scenario; everyone else will enjoy the crowd turning on it, due to Cena’s bizarrely self-obsessed verbiage.

This bout is “unsanctioned” because Rollins re-injured his knee when Samoa Joe attacked during his RAW debut, and it was debatable that Seth would miss his second straight Wrestlemania. He rehabbed quickly and this stipulation was to absolve Triple H and WWE if Seth was injured again. This year’s indulgent Triple H entrance sees him as a biker with Steph as his skanky ho, a role finally befitting her talents.

An annoying match because The H has to go longer than everyone else when he has slowed down so much, while Rollins spent so of the match having his knee attacked then started hitting his high flying moves like nothing happened. Get your pillows ready for this one.

Some rappers are on hand to remind us what the “Skip” button on our remote controls is for, unless the previous match sent you to sleep, in which case you get the extra five minutes you always asked for….

…which could be extended through to this mess of a match too. After the stinker these two had at No Mercy, this seems like the last choice for the top SD Wrestlemania match but there you go. The build up for this was among the worst ever, including Orton defiling a grave and turning arsonist to mess with Wyatt.

As before this was terrible, not helped by the dumb idea of projecting bugs and worms onto the canvas during the down time, making it hard to see the wrestlers. Presumably this was one of Kevin Dunn’s ideas, which we can add to the litany of stupid ideas this moron has spewed onto wrestling fans for the past 25 years.

So if you want to move your company forward and create a new star for the future, the one thing you don’t do is have your top title be contested between a 50-year old part timer at the end of his deal whose combined singles match time thus far is less than two minutes, and another part timer who has been phoning it in for the past two years.

Unless you are Vince McSenile of course. Perhaps the biggest shock of the whole night, this was a rather fine display or two hosses bombing each other with power moves until one prevailed. But we just can’t shake the fact that Lesnar’s 86 second loss at Survivor Series was all for nought with Goldberg heading back into retirement and that RAW will have no champion until Halley’s Comet is back in orbit.

Vince hates acquiescing to fan demand so when social media was ablaze with apoplexy at the SD women being treated like inferiors to the RAW gals, this match was saved from the pre-show obscurity. However Vince is a cruel swine, so he stuck them in this death slot and only gave them 5 minutes so they couldn’t do much to impress anyone which is a shame as the talent is clearly there.

The Undertaker vs. Roman Reigns

This match is on the second Blu-ray disc of this set. Guess who the crowd didn’t like? Anyway, Taker is practically immobile at this point in his career and retirement is looming so, it was decided his last match should be meaningful and be sued to put over someone new. Cena was the original opponent but plans were changed to the ultra-loveable reigns instead, because if anything is going to get the fans cheering Roman again, it will be ending Taker’s career.

As a result this wasn’t a pretty sight, with blown spots galore but they pulled off something watchable enough, just not main event worthy or even memorable. The post match scenario is where the memories are found however, and could have been achieved without this match if we are honest. End of an era indeed.

It might be damning it with faint praise but WM 33 wasn’t as bad as WM 32, although it did feel like a retread with the laborious run time, reliance on the old and part time faces and booking that did most of the roster no favours. Again, there were no elevations, the special moments were fleeting or insignificant – aside from the ending natch – and the whole thing just felt like the company was going through the motions.

I personally dread Wrestlemania coming around each year and I feel vindicated in this after the past few editions of WWE’s flagship event. You can have all the elaborate stadium stage settings and obscure US celebs you want but the heart and soul of the product is gone. The booking is counterproductive and nonsensical as is the idea of appealing to the fair-weather fans by bringing out the older names, instead of the fans and wrestlers who stick with the company all year round.

This main show itself is wide open to much contention, starting off hot then dying mid way through, but this release from WWE Home Video UK offers redemption with the inclusion of the Hall Of Fame ceremony, adding much needed class to the proceedings.

Perhaps Wrestlemania should be a two-day event, one four hour show for each brand, going forward to save the obvious onset of ennui and fatigue among the fans?

One thought on “WWE Wrestlemania 33”