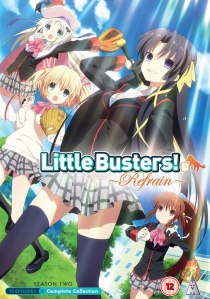 Hopefully by now you’ve had time to digest the 26-episode first series of Little Busters, JC Staff’s adaptation of the visual novel involving a group of school friends who form a baseball team in order to strengthen their bond and help others find a sense of self worth.

Stirring stuff, full of emotional drama and zany comedy albeit with a lingering feeling that something wasn’t quite right due to its propensity for veering towards the slightly abstract on occasion. This follow up series, thankfully running for a more compact 13 episodes, finally explains the truth behind this quirky story, but first you should forget everything that you already know.

Continuing the story directly from the end of series one, the Little Busters experience a spate of bullying from other students brought on by their association with the most recent member to join the group, Yuiko Kurugaya. This is resolved quickly but when nominal protagonist Riki Naoe suffers another bout of narcolepsy, he wakes up in the care of Yuiko.

The next day Riki is struck again by an attack of the zeds, once more waking up in Yuiko’s room; yet he is the only one who appears to have noticed the day is repeating itself prior to his passing out – him and Yuiko that is. Of the group members, Yuiko was one of the few who didn’t get any background character arc in season one so this is her story, and it sets the tone for the remainder of the series as we head down for very unusual and surreal routes.

In a rather surprising turn Riki and the shy Rin, sister of Little Buster’s leader Kyosuke Natsume find themselves becoming a couple and are the recipients of another task sent by the mysterious white cat Lennon. It starts of innocently enough and the duo achieves their goal after a fashion, but the repercussions of it throw an almighty spanner in the works for them, affecting the group a whole.

Then, just as tragedy is about to strike, the reset button is suddenly hit and it is back to square one – only this time Riki assumes Kyosuke’s role in forming the Little Busters baseball team. Confused? You should be but there is much more to come, and while deep-rooted questions are finally answered, don’t expect them all to make sense.

We can’t really blame writer Michiru Shimada for this as she is only transcribing the material from the visual novel, which has no singular outcome due to the tangential nature of the multiple-choice narrative. Shimada therefore has to make sense of it all then turn it into a flowing linear (ish) storyline for the episodic anime medium.

The revelatory twist taking us into the climax is efficaciously potent and palpably fertile for a more streamlined telling, concluding the series on an emotional note of high drama and full investment of the audience. The supernatural nature surrounding it however will prove divisive, jarring with the innocent but bloated slice-of-life build up of the prior thirty plus episodes.

At the risk of spoiling it, there is a passing resemblance to the fantasy series Angel Beats in the final few episodes but that at least made its themes clear from the onset. Here, it is as if the original creators Key were possessed by Nisio Isin of Monogatari fame and threw in some fantastic deus ex machina obfuscation to keep things moving whilst struggling to converge the two ideas.

In the spirit of balance, some of the other main group members finally get their moment under the microscope to flesh out their personalities and backstories, those being muscle head Masato Inohara, Kendo champ Kengo Miyazawa and the enigmatic Kyosuke. Coming at this late stage after the story is reset, the left field approach is in full swing and the tales take on a slight oneiric bent.

Fans of the supplementary female cast Riki was tasked with recruiting for the team will be disappointed to learns that after the opening episodes they are all but consigned to the ether, not featuring at all during the reset period. The focus is purely on the original quintet of Riki, Rin, Kyosuke, Masato and Kengo but for good reason as we are soon to discover.

Here is where the finale will divide opinion. There is nothing actually wrong with the content itself; it is well written, superbly animated, fraught with intense drama and affecting sentiments which allows for more experimental artwork, and features some of the most expressive and committed voice work (Japanese of course) you’ll ever hear in anime, belying what has hitherto been a lightweight series.

The niggling cavil is that the build up for such a powerful pay off is excessive and unnecessary, and that’s putting aside the late paranormal direction. It could have been achieved in less time, perhaps concluding the whole thing in one 26 episode run with less frivolous an extraneous material. There is nothing wrong with being lulled into a false sense of security and the rug is definitely pulled from under or feet but was it worth it?

Other will assuredly disagree, feeling they got to know the characters and enjoyed the humorous antics as the group was constructed. This is valid but the first season was a slog and the ambiguity about what was really driving the story was buried beneath to much fluff to make returning to it a less appetising prospect – this is the equivalent of eating ten layers of cream to get the strawberries when one would have sufficed.

On balance, the final stretch of Little Busters Refrain made this a more enjoyable watch than its overstuffed predecessor even if it didn’t always make sense. Under different circumstances and a little more focus, the central story has the potential to drive a more rewarding, less drawn out series almost certain to resonate deeper with the audience.