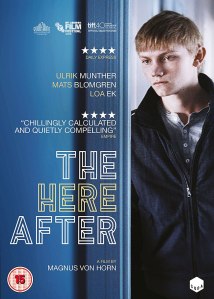 “To err is human, to forgive is divine.”

But what if the offensive act is beyond forgiveness? There are some lines that cannot be crossed and some crimes one cannot turn a blind eye to, no matter how penitent the perpetrator may be. In his feature film debut, Swedish director Mangus von Horn ponders the extenuating circumstances, if any, behind forgiving a heinous crime.

It is a good twenty minutes or so before we are made aware that central protagonist John (Ulrik Munther), a quite, placid teenager, is in fact the rehabilitating offender of the tale. He is picked up from what looks like a teen hostel to live with his father Martin (Mats Blomgren) and younger brother Filip (Alexander Nordgren) in their rural backwater village.

Whatever John did, he wants to put it behind him and return to his old life, but others around him refuse to afford him such an easy return to society. Returning to school, John is immediately ostracised by the other kids and subject to bullying yet never retaliates. The only person unfazed by this is punky tomboy Malin (Loa Ek) who strikes up an unlikely friendship with John, but local hostilities mean this cannot last forever.

Magnus von Horn tries to remain impartial and non-judgement with this moral dilemma of second chances, but the bulk of the story posits John in the role of victim, which under the circumstances he is. If we draw comparisons to Thomas Vinterberg’s The Hunt, also about small town persecution, the cruel isolation suffered by the protagonist is the same, but the main difference is that John is unequivocally guilty.

The crime John committed is barely discussed at any great length, the first revelatory mention coming with his arrival in class prompting students leave the classroom in protest. The teacher insists that “Everybody deserves an education” to which one of John’s tormentors replies “Everybody deserves a life!”. With his felony now clearer, can we still sympathise with John?

A compelling case is made during the first 90 minutes, with Martin trying his best to maintain a sense of normalcy for John, to which Filip does his best to contribute, his young mind unable to fully process the gravity of the situation. One questionable tactic is Martin teaching John how to fire a shotgun, surely akin to teaching a vampire how to use a scalpel to make the blood flow quicker?

John at least has Malin, the only one bold enough to broach the subject, asking him how he felt when he committed his crime, before quickly moving on. Sadly not enough about Malin is shared for us to wonder why she would be so sympathetic or be attracted to a convicted murderer; perhaps it is an easy stereotype to accommodate but Malin’s heavily pierced appearance suggests a social misfit herself.

It is difficult to create original characters for a story of this nature, so we are burdened with the usual array of narrow-minded belligerent types boiling with antagonism with the mere knowledge of John’s presence. Malin too is something of a quickly sketched totem for the one going against the tide of popular consensus, along with the schoolteachers who are caught in the middle, but hold no overt opinion.

Therefore, John is a paradigm changer in the way he is able to continue in spite of the harassment and bullying without any noticeable effect on his demeanour. Perhaps he is a little too saintly in his ability to turn the other cheek but what is smartly underplayed is his understanding of what he has done. John doesn’t intentionally play the victim but his bewildered body language tells us plenty.

During this brief chat with Malin, John makes some alarming calm and frank admissions  about his mindset when he committed his murder, adding a dark psychological ambiguity to his personality. This is all von Horn decides to share with us about John, but this goes a long way to providing the counter argument as to whether he should be given his second chance, in lieu of the troubles his family has incurred from his return.

By avoiding even the simplest of technical and production excesses such as a musical soundtrack or flashy camerawork, von Horn uses the unsettling silence as much as method to draw the viewers attention to the sparsely composed scene as the gorgeous photography; the heavy use of depth perception isolating the focal point, usually John, freezing them in the moment of abject melancholy.

Single takes shot from a distance are a regular feature, a highlight being when Martin picking a truculent Filip up from a football game, leading to a fight with older youths. The entire scene is shot from inside Martin’s car, putting the viewer at a safe distance, yet it conveys everything it needs to, retaining every bit of its power. Other similar shots, simply convey the vast emptiness that surrounds John on his daily excursions.

Arguably the most remarkable aspect of this film is the lead performance from Ulrik Munther. He may not look it, with his sharp boned but unassuming pixie-esque features and dispassionate stare, but Munther is in fact a popular singer-songwriter in his native Sweden. With alarming maturity and astuteness for a debut performance, Munther takes John on a believable journey from mild mannered reformer to slowly simmering pressure cooker and finally emotional time bomb.

Similarly, von Horn acquits himself as a vibrant new voice in cinema, demonstrating a curious sense of wanting to challenge social perception and moral boundaries. His presentation shows a heavy European arthouse influence – the slow pace, sparse production values, visual immersion – but all signs suggest he’ll establish his own style over his next few films.

An assured debut like The Here After doesn’t come along too often, and hopefully this perceptive and intelligent provocative drama is the first step to a productive career for Magnus von Horn.