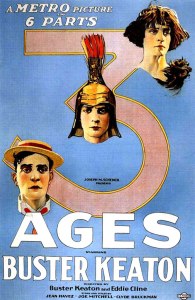 Buster Keaton’s second feature length film was the first where he assumed full control of the production so a lot was riding on it. While it hasn’t been as fondly remembered as his other works, Keaton’s satire on D.W Griffith’s era-hopping epic Intolerance was successful enough to assuage any fears about Keaton’s ability to transition from short movies to the longer format.

As the title suggest the film is told across three eras – Prehistoric, Roman and modern day (well, 1923) – and, like Griffith’s film, is about the endurance of love and how little about the mating ritual has changed over the millennia. The set-up is the same during each story: Keaton is the hapless lover trying to woo a girl (Margaret Leahy) at the same time as a much larger and affluent rival (Wallace Beery).

In the modern day segment the characters assume the same name as the actors which suggests Keaton and co-writers Clyde Bruckman, Joseph A. Mitchell and Jean C. Havez didn’t bother to create any names since none of the characters in the other two segments had any either. Incidentally, the writers’ names are used for those of members of a football team in the modern arc.

Following Griffith’s template of flitting between each story, the end result amounts to a series of vignettes with a flimsy thread to hold them together, which would appear to have been a deliberate game plan. Because Keaton had yet to prove his creativity in feature length films, he shot each segment as a complete piece so if the film as a whole flopped, he could then put the individual parts out as a short films.

But, as it transpires, he really didn’t need to. Each section has something to praise it for and make it unique in its own right yet the triptych narrative actually works in its favour, since the writing is canny enough to leave us wanting more at the end of each skit. Beginning with the prehistoric age, the film opens with Buster dressed in animal hide as was the assumed image of Neanderthal man of the time (and still is).

His archrival may be seen riding an elephant (I guess they didn’t have enough resources to try to dress it up as a mammoth) flanked by loyal minions but Buster’s mode of transport is a brontosaurus! Two years before The Lost World stunned filmgoers, the dinosaur was a stop motion animated creation – as was the tiny Buster in one scene – and while crude compared to Willis O’Brien’s work, it was effective enough to be a cute comic attraction.

Much of the comedy comes from the use of clubs and rocks as both slapstick props and weapons while communication comes through chest beating and other primal forms of gesticulation. One amusing scene sees Buster trying to make his girl jealous by following the wooing techniques of another caveman, but the woman he is with is twice his size. The climax is a cleverly shot stunt that was, as ever with Keaton, ahead of it time.

In the Roman age, Keaton’s character is not so much bullied by Beery’s but remains belittled by his stature. As ever the huge Joe Roberts and Lillian Lawrence are on hand as the girl’s parents and like before, they favour the high-ranking solider Beery while Buster is just rank in their eyes. However, Keaton is a resourceful chap and uses his ingenuity to best Beery in their showdowns.

One highlight of this arc is the chariot race which takes place in the snow (!) and even if it can’t be seen as an influence on Ben Hur, it makes for an amusing and inventive alternative. Another masterful gag is Keaton’s interactions with a lion, clearly a man in a suit but that actually makes the joke funnier. The biggest jokes are born from the use of anachronisms, which Mel Brooks would employ in History Of The World Part 1 almost 60 years later.

The modern times setting sees Keaton back to being bullied by Beery in the quest for Leahy’s affections, this time however Beery is already further along the track due to his wealth. In keeping with a tradition of Keaton’s films, his character is often a victim of circumstance rather than the hand of fate which gives Beery the upper hand when his own machinations backfire.

Chock full of more subtle and carefully constructed gags, the slapstick side of the comedy doesn’t reveal itself until late in this arc, specifically in a brutal football game and the obligatory race against time. This begets a clever stunt in which Buster takes a remarkable five-part tumble off the side of a building, ending up sliding down a fireman’s pole.

In actual fact, this was a happy accident per se as the first spot, Keaton leaping from one building to another went wrong and he was laid up for three days. But when he saw the footage of the fall, he was so impressed that he decided to build upon it, adding further obstacles for him to crash through. The result is remarkable to behold and a deft piece of editing for the period.

Outside of this, Keaton was surprisingly hesitant with the big stunts here, something which would later become his trademark, possibly down to spreading out the material across a longer run time. This makes the film seem less exciting when compared to its more famous successors, yet this more studied approach held Keaton in good stead for when his later features required compelling storylines to sustain them.

Everyone has to start somewhere and for his first feature length film Three Ages is both a step forward and a turning point for Buster Keaton as a filmmaker, and a huge slice of fun and frolics for his fans to enjoy.