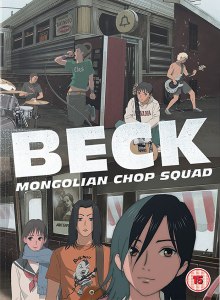 Anyone with a long memory will recall this title was originally released almost a decade ago in single volumes by Revelation Films, but was never completed when Revelation ended their anime distribution, leaving fans with an incomplete series. Thankfully All The Anime have rescued Beck: Mongolian Chop Squad from the vaults and presents the entire collection in this brand new box set.

Originally made in 2004, this warts and all tale detailing of the ups and downs of chasing the rock and roll dream is based on the manga by Harold Sakuishi which ended in 2008, explaining the oblique point this adaptation closes on. But make no mistake, this is still a remarkable journey which the audience shares with central protagonist, 14 year-old Yukio “Koyuki” Tanaka.

Feeling his life is going nowhere, Koyuki one day saves an odd-looking dog from some kids, his grateful owner being 16 year-old Ryusuke Minami, an aspiring rocker who has recently returned to Japan after eight years in New York. Ryusuke invites Koyuki to see his band play, the young lad enamoured by the music and Ryusuke’s guitar playing.

Ryusuke gives Koyuki one of his old guitars and encourages him to learn to play, an added incentive being the attention of Ryusuke’s younger half-sister Maho, a singer in her own right. When Ryusuke’s current band splits, he and his former band mate Eiji decide to each form the ultimate band – and Koyuki is going to be a part of Ryusuke’s.

It doesn’t take long to realise that this isn’t going to be your conventional music based anime and not just through the scruffy but immediate attention grabbing animation. There is a raw, unfettered vibe that permeates through every frame that is achingly honest and authentic, buttressed by a palpable atmosphere created through the sound designs.

This is a living breathing show that may deal with the fantasy of music stardom but with its feet planted on the ground, avoiding the clichés and glossiness of other shows; this is an immersive experience from start to finish, rich with relatable drama, recognisable growing pains and some decent tunes to boot. Despite being over a decade old, it is still fresh and relevant today.

Koyuki may be the nominal lead but he is just one of a cast of unique and engaging personalities, some featured more than others but the sum is greater than the parts. The band – named Beck after Ryusuke’s dog – is comprised Ryusuke and Koyuki on guitar, hot head singer Tsunemi Chiba, skilled bassist Yoshiyuki Taira and Koyuki’s classmate Yuji “Saku” Sakurai on drums.

Elsewhere pervy former Olympic swimmer and guitar player Kenichi Saito, tutors Koyuki in both guitar and swimming in return for free labour, lending him some of his own guitars to play. On the opposing side, school bully Masaru Hyodou, another aspiring guitar player, goes out of his way to torment and obstruct Koyuki from succeeding.

Along with the journey of the band there are two conceits keeping the story moving, both involving Ryusuke. The first is his connection with Eddy Lee, guitarist of popular US band Dying Breed, favourites of everyone in the show, Koyuki being a late convert. This provides the band with a pivotal point in their success, Koyuki in particular.

The second revolves around Beck and the bullet ridden Les Paul guitar Ryusuke plays. Named Lucille (yes this is a riff on BB King’s legendary guitar), Ryusuke is shady about its origins and the bullet holes. However, when a BECK CD is released on an indie label in America, Ryusuke and Lucille are shown on the front cover, leading to Ryusuke’s past catching up with him with dangerous and life changing results.

Admittedly there are points where this cross continent sub plot appears to overreach itself in the plausibility stakes but suffices in playing into the mythos behind Ryusuke’s enigmatic magnetism. A lot of the dialogue is in English, spoken by Japanese voice actors so be prepared for awkward sounding American accents speaking “Engrish”. For some reason it was decided all Americans sound black and can’t speak without using the “F” word in abundance, hence the 15 rating for what is a relatively safe show.

Equally niggling is how the cast – except for Koyuki – are all so young yet look and behave way beyond their years; Ryusuke is too well travelled and jaded to be 16 and Chiba appears to be about 30! Then there is Maho, who is not a tsundere but does regularly tease Koyuki into thinking they are a couple before hooking up with someone else.

If your music knowledge extends beyond the last two years you’ll find references galore to many bands and musicians either directly or subliminally; some crop up as shop names while others are part of a portmanteau for a whole new character, e.g.: Sony Boy Walters or John Lee Davies.

Sakuishi also knows his instruments so guitarists will enjoy the attention to detail when discussing the various makes. Musically the songs are legit – none of you twee idol pap here – and are repeated quite often as they should, rather than each new scene yielding a new song.

Visually the quality fluctuates throughout, the characters quite often slipping off model depending on visibility and distance from the camera. Yet this is all part of the charm and gives the show its earthiness and verisimilitude in the physical movements, especially during the musical performances.

Earlier I described Beck: Mongolian Chop Squad as a “warts and all” tale and that is exactly how should be accepted. It has its little cavils and quality issues but it is all part of what makes it so unique and refreshing in a world of endless magical girl, fan service, mecha shows saturating the anime market.

An underrated classic this new release should see Beck get the attention and respect it deserves. Unlike other music anime this one goes to 11!

Textless Opening – Hit In The USA

Textless Closing – My World Down

Textless Closing – Moon On The Water