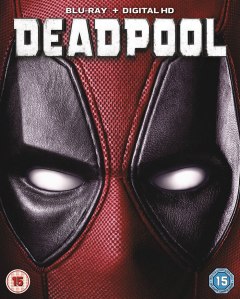 Yes I know everyone else reviewed this at the beginning of the year but some of us have had to wait for the Blu-ray and, in this instance, for LOVEFilm to send it out to me! Then again I have reviewed films one-hundred years after they were released so patience is a virtue I guess….

I must confess to not knowing anything about Deadpool prior to this film; I certainly didn’t know he was a Marvel character  – could Stan Lee create such a profane anti-hero? As it happens Lee had nothing to do with Deadpool, who is apparently a character from the X-Men universe, but I have to base my knowledge of him on this live action film, directed by former SFX specialist Tim Miller.

The story unfolds in an unconventional manner which suits the maverick nature of the titular character aka Wade Wilson (Ryan Reynolds). We join the film in medias res as the first sight of our (anti)hero is in a mid-air tableau in which he is inside a car that has been flipped over along with two other men, a shower of bullets, glass, blood and miscellaneous objects from inside the car all suspended in time.

Providing his own narration, just the beginning of the tongue-in-cheek Meta approach to this film, Deadpool takes us back a few minutes in time to explain the set up for this situation, before unleashing a wave of unbridled violence on a group of bad guys. Just as Deadpool has the man who disfigured him, Francis (Ed Skrein), at his mercy, the story goes in reverse again to how this whole mess started.

Don’t worry, it’s not as confusing as it sounds, thanks to our narrator paying us the simple courtesy of letting us know when we are about to switch timeline. This is not your ordinary comic book film – it can’t really be called a Superhero film due to Deadpool’s actions and his admitted reluctance to fulfilling that role. He is intent on revenge and revenge only – well that and restoring his face.

To cut a long story short, Wade Wilson is a mercenary with the gift of the gab, as quick with a witty (and often vulgar) one liner as he is with a blade or a gun. Despite a lawless and unruly lifestyle Wade finds his soul mate in prostitute Vanessa (Morena Baccarin) but their relationship hits the skids when Wade is diagnosed with terminal cancer that has ravaged most of his body.

When all hope seems lost Wade is approached by a man (Jed Rees) who claims he works for an organisation that can not only cure his cancer but also turn him into a super human. Wade reluctantly agrees and is put under the control of Francis (known as Ajax) and his assistant Angel Dust (MMA fighter Gina Carano), who reveal that they are in fact making super human criminals.

Since Deadpool is part of the X-Men franchise – he is assisted by two lesser known mutants, the giant metal brute Colossus (voiced by Stefan Kapicic) and atomic powered Negasonic Teenage Warhead (Brianna Hildebrand) – he is essentially fighting a group of anti-X-Men who in this case are more human than mutants so it’s not actually a rehash of every X-Men film.

In fact this is quite far removed from every other Hollywood comic book film you’ve seen (Asian cinema is another thing), with the possible exception of Watchmen, except no heads are up any arses here. This is fourth wall breaking, self-referential, mickey taking, satirising, Meta cinema that pokes fun not just at the comic book genre but filmmaking in general.

From the cheeky opening titles informing us the film includes in its cast “CGI character” and “a moody teen”, is written by “the real heroes” and directed by “an asshat”, to the verbal knowing winks aimed towards conventional filming techniques, there is a fine line  being trodden here in terms of how it wants to engage the audience. There is a decent story beneath the frivolous lampooning and in-jokes, complete with spectacular but very violent action holds its own against any other blockbuster.

Even when Deadpool is firing off his sarcastic profane quips and retorts, it often comes amidst a flurry of gruesome graphic violence which does jar occasionally against the humour, as black as it usually is. This is not limited to scatological jokes, insults, coarse aphorisms, sexual references and even characters, such as Deadpool’s post-accident flatmate Blind Al (Leslie Uggams), an elderly black woman with a drug habit.

Nothing is sacred and that goes for the on screen content – although surprisingly animals escape this treatment – making this a rare comic book film that should have an 18 certificate, along with the severed limbs, stream of F-words and inventive use of the profanity lexicon, and nudity. Whatever Kick-Ass wanted to achieve Deadpool does it better, going by the way of American Pie.

I’ve never been a fan of Ryan Reynolds, finding him a one trick pony – not to mention the Green Lantern – but here he seems to take that one trick and find his niche with this character. He embraces the silliness as usual but is able counterbalance this when the need arises for a serious performance. He even self-deprecating enough to mock himself  throughout the film and by name!

Everyone else is tasked with playing it straight unless they’ve been given a few witty lines of their own, such Blind Al and Wade’s bar owner friend Weasel (T. J. Miller), which surprisingly doesn’t create an awkward clash in the characterisations or the interactions between them. Similarly the violence acts as leveller to bridge the gap between the comedy and the action.

There is a post credit sequence (two in fact) that hint – in keeping with the film’s inimitable style – at the inevitable sequel. While I was initially unsure about Deadpool, I am more than up for second round with him!