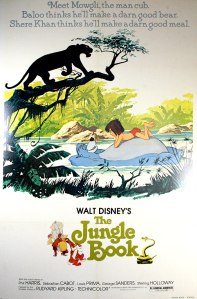 Yes, I know there is a new CGI version of this classic Rudyard Kipling tale out but the reason for reviewing this eximious Disney version now is twofold – first, the 2016 version will be held up against this film making it necessary to watch for the sake of comparison; and second, I have very fleeting memories of this being the first film I ever saw at the cinema.

We’ll get to the second point later. I have no doubts that comparing the new version to Disney’s will be spurious but since it has become considered the definitive telling of Kipling’s novel, at least with the characterisations of the main animal cast, it will be interesting to see how much influence this film still holds.

Kipling’s original work was a collection of short stories concerning the adventures of a young boy named Mowgli who grew up in the jungle, with the animals presented as anthropomorphic to promulgate Kipling’s moral lessons. The tone is therefore darker and takes a more serious look at the man vs. animal themes.

Walt Disney, in his last film before his death in 1966, wanted his adaptation to be much lighter and simpler so he instructed his writers to pick the best bits from the first few stories. Thus we have a film which is 50% classic songs and comedy and 50% plot, yet it all adds to 100% enjoyable entertainment.

Mowgli is discovered as an orphaned baby abandoned in the jungles of India by a black panther named Bagheera (voiced by Sebastian Cabot), who takes the “man cub” to a family of wolves hoping they will raise him with their own litter. A few years later, Mowgli now a young boy settled into the jungle life, Bagheera learns that the dangerous man hating Bengal Tiger Shere Khan (George Sanders) has returned to the area.

Fearing Shere Khan will kill Mowgli (Bruce Reitherman), Bagheera volunteers to take Mowgli back to the “man village” for his own safety, but the boy refuses to go. Mowgli then meets Baloo (Phil Harris) a large sloth bear who takes the man cub under his wing, until Bagheera explains to him why Mowgli needs to leave the jungle, bringing both together to change the boy’s mind.

To say there is not much to the plot is an understatement, the run time of just 75 minutes making this even more obvious. But don’t mistake this for a bad thing – the songs and incidental scenes tell a story in their own right, whether providing exposition or furthering the narrative. Even in this redacted form, one can get a feel for Kipling’s original intentions for the story’s moral.

It may not be immediately obvious but it is possible to divine a strong proposition for the benefits of multiculturalism in this tale, with the outside “man cub” being treated as one of the family by wolves, and befriended by a black panther, a bear, a quartet of vultures and a troop of elephants. Mowgli himself doesn’t distinguish between any of them either, this attitude equally ingrained in him too.

Putting aside that as a work of fiction we’re to simply expected to accept that they all speak English and can communicate without the handicap of translation, Mowgli retains his human identity whilst fully adapted to the animals’ feral and uncomplicated lifestyle. The reason Shere Khan hates mankind is their dominance over the animal kingdom with their fire spitting weapons, and wants to prevent Mowgli from becoming one of them.

Considering that logic it’s difficult not to sympathise with the canny tiger, except his means to an end is a little rash and presumptuous. Aside from a young village girl who appears at the end (whose design has since become a template for many a future Disney heroine), Mowgli is the sole human in this story, which puts Shere Kahn at odds with the rest of the jungle through his own paranoia.

While Mowgli make friends with most of the jungle dwellers he encounters, including a group of vultures originally to be voiced by The Beatles but John Lennon refused the gig (although a mop top vulture with a laconic Scouse accent remains in the film), not all are so friendly. There is Kaa the python (Sterling Holloway), who keeps trying to hypnotise Mowgli so he can eat him, and the tribe of rascally monkeys which kidnap Mowgli.

A non-canon character, the monkey leader King Louie is voiced by the Jazz legend Louis Prima, and provides the film with one of its two most iconic songs I Wan’na Be like You, a catchy swing track that flies in the face of the psychedelic rock that was dominating the pop charts of the period. The other timeless classic is Bare Necessities, sung by Baloo and, like its companion, is fondly remembered by the visuals which accompany it.

The artwork is interesting in that the backgrounds are exquisite as aver and the character designs are distinctly Disney, yet the drawings still carry with thick pencil lines, as if they were lifted directly from the artist’s sketch pad and onto the camera rostrum! The body movements of Mowgli and the dancing scenes are acutely observed however.

I mentioned before about this being my earliest film memory – well, before this viewing I was only familiar the two above mentioned musical clips which usually are shown to represent this film on TV. Prior to this, I have on very vague memory of seeing the animals running through the rain on the big screen, when I was about two or three (not in 1967 by the way).

Having now seen the classic musical numbers in context and got round to this delayed rewatch after (mumble mumble) years I can see why The Jungle Book is such a perennial favourite in the Disney catalogue. The new version may be a weightier effort but will it be as fun or as memorable? We’ll see…

2 thoughts on “The Jungle Book”