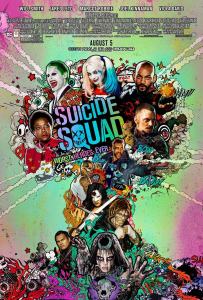 It was initially hoped that 2016 would be the year of the comic book/action blockbuster and in many ways it is – only it is the year that the genre lost its box office allure. Is Suicide Squad the latest victim of this downward spiral?

Set in the wake of  the events in Batman vs. Superman, US defence chiefs are concerned Batman (Ben Affleck) cannot cope alone in fighting crime and wonder what kind of protection they have against a super powered villain. Intelligence operative Amanda Waller (Viola Davis) reveals that the answer lies with a group of extremely dangerous criminals currently held in a maximum security prison.

Actually the story is a little more involved than that and therein lies the problem with David Ayer’s script, which tries to pack too much of one thing into it while not focusing on others. For example, it is made clear from the start that Deadshot and Harley Quinn are the “stars” of the group getting five minutes each for their flashback introductions while the others get a minute or, in the case of Slipknot (Adam Beach) nothing at all.

The way the plot unfolds is backwards. Waller assembles the group then a convenient crisis occurs? Shouldn’t it have been the other way round? Part of why this happens is because Enchantress was part of the original line-up, with Waller holding her heart as hostage, but goes rogue, releases the spirit of her brother Incubus into a random male body (Alain Chanoine) to assist her in plan of destruction.

It is after thirty plus minutes of set-up and introductions before the main plot kicks in but already it is flawed because Moon’s lover is elite soldier Col. Rick Flag (Joel Kinnaman) whom Waller tasks with leading her squad of misfit criminals. This conflict of interest with their relationship is compounded by the fact Flag can’t stop Enchantress taking over Moon’s body so what use is he to her and as a protector of the state?

Later in the film there is a twist involving Waller which puts a question mark over her motives for creating this team of criminals but to be frank, I’m not sure if it was a twist. Whatever it was is poorly executed and confuses an already clouded issue, which suggests either something was edited out (and will appear in the Blu-ray version) or the script editor fell asleep at this point.

Once the action kicks in, such things become irrelevant as the focus is on the baddies doing bad things for the right reason and as explosive and high energy bombast goes, there is little complaint on that front. It’s naturally CGI heavy with mammoth explosions, gravity defying flying bodies and computer generated armies of blobby men as is to be expected in today’s cinema but great fun while it lasts.

However, the squad themselves are oddly limited in terms of superpowers – only Diablo has the power of fire and he refuses to use it to atone for his prior actions (revealed in a very late flashback). This, along with Deadshot’s moral obligation to his young daughter, provides a sorely needed emotional conflict for these hardened criminals but is swept under the carpet by the obvious “But we’re the bad guys” doctrine.

Killer Croc suffered from a rare skin disease which made him look like and eventually turn into a reptile. He is strong and happy in the water otherwise, nothing. Boomerang uses a steel version of his namesake but prefers knives and Aussie lager; Deadshot is an assassin who never misses his target and Harley Quinn has a baseball bat and the world’s tiniest hot pants.

The only truly skilled fighter is Katana (Karen Fukuhara), Flag’s Japanese bodyguard with the Soultaker blade with the spirit of her dead husband. More fascinating than most of the lead characters Katana (a traditional curved Japanese sword) is introduced with no fanfare and no background either, but at least she is played by a half-Japanese actress.

You’ve probably noticed that I’ve not yet mentioned the Joker, played by Jared Leto. This is because he is in the film for ten minutes at the most, featuring largely in Harley Quinn’s flashbacks and the chaotic final act, contrary to the promotional material centred on him. Leto’s performance is fine, channelling parts of Heath Ledger’s unhinged portrayal with Jack Nicholson’s psychotic joie de vivre, but not very memorable.

For the first time ever I actually didn’t mind Will Smith here since he plays Will Smith in every role I’ve seen him in, but this time he does it with an edge which actually suits him. Harley Quinn is pure fan service but Margot Robbie brings out both her playful and dangerous side with charm and verve and gets most of the screen time too.

Viola Davis as Waller is the tough female cookie many films need in a lead role while the other male leads are sadly too non-descript to be effective, due partially to their underdeveloped characters. Cara Delevigne’s casting was either a joke or a favour to one of the producers. I don’t know what her talent is supposed to be but acting clearly isn’t it.

All told, Suicide Squad isn’t as bad as some of the more vitriolic reviews will have you believe in terms of being an entertaining action flick, but once again the overloading of the script and unbalanced character focus lets it down badly. If you do see it, don’t leave before the credits end.

Not the worst blockbuster of 2016 but not the best either.