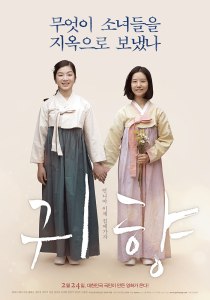 The Japanese occupation of China from the 1930’s to the end of the World War II has been the subject of many films from that country, yet the Koreans don’t seem so forthcoming in reflecting on the same treatment they endured on film. Understandably the memories will be unpleasant and raw for those still alive but the benefit is exposing them to new audiences for discussion.

This second feature from Cho Jung-rae is designed to do just that, giving recognition to and offering condolences to a specific group of people who suffered mercilessly under the Japanese regime – the Comfort Women. While a fictional and highly dramatised account, the inspiration comes from the harrowing paintings and testimonies of one survivor, Kang Il-chul.

In 1943, 14-year old Jung-Min (Kang Han-Na) is forcibly taken away from her parents by Imperial Japanese soldiers and put onto a train with other girls similar in age headed for China. On the train Jung-Min meets 16-year old Young-hee (Seo Mi-Ji) and they vow to stick together and be friends. Upon arriving in China the girls are taken to a Japanese military base where they forced to work as sex slaves for the Japanese soldiers.

Meanwhile in 1991, a young girl named Eun-kyeong (Choi Li) is taken to live with her godmother Park Song-Hee (Baek Su-ryun) an elderly shaman who recognises her latent spiritual abilities. Song-hee orders a robe from an old seamstress friend Young-Ok (Son Sook), to facilitate a meeting between Young-Ok and Eun-kyeong, believing they can help each other.

While it may not seem apparent early on the flitting between the two timelines has a purpose which, relative to the Shamanism story arc, isn’t so easy to explain without going into huge detail and spoiling a major revelation. This is the part of the film which serves as the consolation for the Comfort Woman, of whom a few survive and many others remain unknown even after a government campaign offering them the chance to register for help.

Cho Jung-rae is rather pointed in displaying his feelings at how this story is not greater common knowledge in a scene when Young-Ok goes to register only to lose her nerve. The young man behind the counter makes an insensitive and derogatory remark about why the women aren’t coming forward – his ignorance towards their plight perhaps not as appalling as the abuse they suffered but the insult still stings.

This is a hard film to watch. Cho has gone for impact both emotionally and viscerally yet doesn’t sensationalise, keeping the explicit nature of the atrocities to as bare a minimum as possible without trivialising them either. It is difficult not to be effected by the horrific physical and psychological abuse endured by these young girls whilst our disgust at the sneering and barbaric perpetrators never abates.

Perhaps in response to the Japanese having never formally apologised for these horrors – with those on the right reportedly refusing to acknowledge them happening, similar to their denial of the Rape of Nanking – Cho paints the Japanese as one-dimensional evil to the bone monsters. The closest we get to balance is one soldier who refuses to sleep with Jung-Min and gives her a map to escape with, this defiance costing him his life.

Not surprisingly the cast is entirely Korean, although they do speak Japanese, since I can’t imagine any Japanese actor wanting to play such a vile and damning role. Just as sickening as the vulgar misogyny (“You are not human, just bitches for the Imperial Army” the girls are told) there is a lone Japanese female overseer who shows no empathy towards the girls whatsoever.

Having suffered endless abuse and in some cases, driven mentally mad, it is amazing that the girls can still muster the strength to keep their spirits up and harbour the tiniest flicker of hope of an end to their vicissitudes. This is the reminder of that they are just children despite the adult world they’ve been thrown into and the quick growing up they’ve been forced to do.

This is then juxtaposed with the modern day setting of Young-Ok, representing the many women who have lived silently for years. Like any traumatic experience it festers within and becomes impossible to discuss openly with anyone, and this is Young-Ok’s cross to bear. The Shamanistic resolve might be a little fantastical and jarring given the darkness of the subject but the allegory is well meaning.

If the film’s approach evokes polarising opinions, what cannot be argued is the quality of the performances. Both veterans and youngsters have roles of differing emotional strains yet no-one misses a beat. It can’t have been easy for the juniors to immerse themselves in such traumatic scenes but they all apply themselves with maturity and confidence.

Give her a few more years and Kang Han-Na will be a force to be reckoned with, her star making essaying of Jung-Min being one of the most mesmeric seen from any actor in quite a while, young or old. Similarly, the haunting aura that permeates through Son Sook’s turn as Young-Ok is the bullseye Cho was aiming of in terms of audience sympathy.

Cho’s film or good intentions can’t repair any of the damage originally caused back then and there is a possibility it may even reopen old wounds for the survivors, but judging by the public funding response and the subsequent box office success, along with a campaign to get it into more cinema, awareness of this story now has a higher profile in Korea, which must count for something.

Reaction will vary depending on how sincere one believes this film to be, but Spirits’ Homecoming serves to inculcate as much as it does pay tribute to the strength and resolve of the Comfort Women, alive or dead. It may be a shocking and often unbearable film to watch but it is one that needs to be seen.