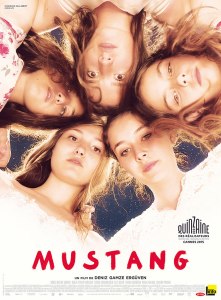 In other reviews of this French/Turkish co-production you’ll see comparisons made to Sofia Coppola’s 1999 directorial debut The Virgin Suicides, a film I believe I have seen but remember very little, if anything, about. Therefore you will be spared such cross examination in this review and all commentary on Mustang is based on its own merits.

The story revolves around five orphaned sisters – Sonay (İlayda Akdoğan), Selma (Tuğba Sunguroğlu), Ece (Elit İşcan), Nur (Doğa Doğuşlu) and Lale (Güneş Şensoy). After being spied enjoying an innocent frolic on the beach with some male classmates on their way home from school by a pious neighbour, the sisters are admonished by the grandmother (Nihal Koldaş) for their obscene public behaviour.

As a result, their strict uncle Erol (Ayberk Pekcan) decides to keep them locked up in the home, with all forms of communication and entertainment banned, even stopping them from attending school. But when the girls continue to find a way to escape, Erol gradually turns their home into a fortress while the grandmother thinks it is better to marry the girls off.

If you have seen The Virgin Suicides and have a better recall of it than I do, then you’ll probably see the immediate comparisons others have formulated when studying the plot of this debut outing from female Turkish director Deniz Gamze Ergüven. However I am somewhat confident that the similarities will peter out fairly quickly, due to this film possessing a strongly founded feminist streak in its social commentary.

What I can remember is that the siblings in Coppola’s film were presented as enigmatic, almost ethereal beings, bedecked in uniformly chaste white attire; the sister here are far more real and tangible. The only time they’re are dressed alike is when they are forced to wear dowdy, plain brown dresses in public, so not to entice any males they might encounter.

Otherwise the feisty five-some wear trendy, colourful clothes around the house, not too skimpy but certainly relaxed enough under the purview of oppression under which they live. This is a small matter however compared to the lack of freedoms afforded to them, all removed after an unjust and myopic misinterpretation of innocent fun from a miserable busy body. Naturally the girls are going to rebel.

Patriarchal societies are something we in the west find hard to appreciate and relate to especially as time moves on, and women find their role in the world on the increase. To us the actions of Uncle Erol are draconian at best and abusive at worst – in fact, it is alluded later on that Erol takes an all too personal interest in the girls once they come of age.

It takes about five minutes for the plight of the sisters to become apparent and the lines of protagonist/antagonist to be clearly drawn. The audience is under no illusion which side to choose although we are in for a bit of a surprise. The Grandmother is an ambiguous character insofar as her stern dispensing of punishment at the beginning suggesting she is the problem, when in the next scene she is protecting the girls from Erol.

As the film progresses it would appear that the grandmother is in fact playing prison warder to help the girls and her subsequent marrying them off is for their own good. For example, the eldest sister Sonay is visited by a suitor but she refuses as she has a secret boyfriend, so granny has the next sister Selma betrothed instead, against her wishes.

As hard as such arbitrary dismissal of a girl’s feelings or right to independence are for us to swallow, this is just one harsh reality of this culture women have to face. And it gets worse – after the wedding night consummation, the parents of the groom are to inspect the bed sheets for blood stains to ensure the bride is a virgin. Selma’ failed to bleed so she is whisked off to the hospital in the middle of the night for a check up!

The narrator of the story is the youngest sister Lale, who is also the canniest and smartest of the lot. By the end of the film the level of her precociousness requires us to take a leap of faith, but ultimately it is her unformed and brash childish energy that drives both the film and the group dynamic. For instance it is Lale’s love of football which instigates the sisters’ first major group sneak out, which has rather remarkable results.

While much of the content will frustrate and enrage the tone is very upbeat and Ergüven is able to inject some levity and genuine moments of youthful joy into what alter becomes a bleak and tragic tale. The girls are able to make their own fun by pretending their room is a swimming pool while they put their interminable sewing and cooking lessons to good use in their escapist subterfuge.

The film’s strongest asset is the natural and vivacious performances of the young cast, all but one are first timers. Similar in appearance to be believable siblings, they create a corresponding convincing group chemistry that permeates through the screen. They are all photogenic without being impossibly glamorous or older than their roles, keeping the credibility factor intact.

Delivering a personable and show stealing turn however is Güneş Şensoy, already something of a chameleon, flitting as she does between naïve and excitable runt of the litter to devious and deadly mastermind from scene to scene. She has a bright future in acting if she sticks to it – they all do in fact.

The final act admittedly tows the lines of convention a little too much but not enough to spoil this intelligent and defiant debut from a promising new director. Mustang is a vital, hard-hitting indictment of a suffocating, anachronistic patriarchal society under which young women in the 21st century should not have to suffer.

Arguably one of the most important films of the year.