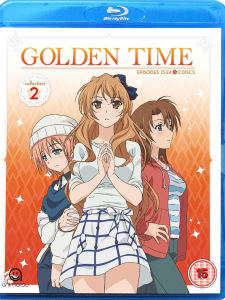 The antidote to all of those “will they, won’t they?” romantic comedies continues with our loved up couple, nice guy amnesiac Banri Tada and hard-to-handle hottie Kouko Kana actually getting along and enjoying life together after clearing many hurdles along the way.

Of course this wouldn’t be a worthy drama is everything was so copacetic which is why the spirit of Banri’s past memories is watching on in a fit of jealousy and decides to make the current Banri’s life a misery. If you recall, the old Banri was in love with Nana Hayashida aka Linda but Banri was involved in an accident and subsequently lost his memories of everything prior to that point.

With current Banri now finding love and happiness with the capricious Kouko, the Ghost Banri is now upset that the love for Linda will never be fulfilled hence his vow of vengeance. Whether or not Ghost Banri has that power is moot – things do start to go a little wrong for the happy couple before going very wrong.

The consensus among fans of this adaptation of Yuyuko Takemiya’s light novel series is that this supernatural element was a distracting and unnecessary facet of the Golden Time storyline, since romances are capable of providing epic journeys without such extraneous fantasy influences.

In all fairness this does give the show a unique selling point but only if it had been established from the onset and not introduced a few episodes in and then only featured randomly. Having set the groundwork for this budding relationship in the first volume, Ghost Banri plays a greater part in this second instalment, creating a power struggle for Banri’s memories and the expected conflict set to challenge the strength of this coupling.

The first real test for Banri and Kouko comes when a trip to the beach (fan service alert) is marred by Kouko falling asleep at the wheel of the car and narrowly avoiding a serious accident. After being publicly slapped by her father Kouko goes into hiding, distraught at the danger her actions put Banri and the others in. This forces Banri to step up and reassure Kouko that she is forgiven.

Ghost Banri steps up his campaign when Banri and Linda return to their hometown for a high school reunion where his erstwhile classmates are all on hand to remind Banri of what he has forgotten. This gives Ghost Banri the opening he needs and hereafter, flashes of Banri’s memories begin to return, momentarily replacing his new memories – especially those of Kouko.

Even if the spectral interference is debatably goofy the drama plays out rather nicely as Banri essentially finds himself caught between two realities with two different loves of his life. The unresolved issue between him and Linda causes much unrest within their circle of friends when it resurfaces through Banri’s confused state, not in the least because Linda has a new man in her life.

And poor Kouko doesn’t know which way to turn either, although she tries to be strong and understanding towards Banri’s condition it proves difficult for someone of such a fragile and needy nature. It is interesting to witness the role reversal of the two principals from the first volume, with Banri now the troubled one and Kouko having to assume the responsibility of holding the relationship together, the changeover deftly handled by Fumihiko Shimo’s script.

With conflict being the order of the day, there are plenty of instances where the cast are tearfully yelling home truths and emotionally distorted sophistry at each other, with the odd slap thrown to punctuate this confrontations. If we have learned anything from anime it is that the Japanese do verbose outpourings of anger and hurt like no other, and the aggrieved parties here are no exception.

If it isn’t Banri rowing with Kouko, then it’s Banri rowing with Linda; or Kouko rowing with Chinami Oka (who later become best friends); or Oka tearing strips off Banri; or Banri’s neighbour Nana laying down the law with Kouko, Banri and Linda; or 2D Kun gong off at everybody else for being left out. There is certainly a lot of tension and repressed feelings being exorcised in this show.

However there is a marked increase in the use of goofy humour in this second half, with the notable arrival of the anime comic affectations, such as the contorted faces and blank eyeball reactions. This clashes with the otherwise pervasive serious tone of the show but the above examples are usually brief. The funniest moment is the classic “Exorcist” spot with Kouko; I won’t spoil it but it is so silly it is great!

Aside from a few episodes set around the beach trip (even then this helps further the bond of the group dynamic), the story stays on track throughout these twelve episodes, maintaining a vibrant and infectious energy right to the end. The drama is laid on pretty thick, with the twists and turns incurred by Banri’s memory issues likely to put a question mark over the show’s credibility for some.

The theme of this show is ultimately about the power and importance of memories, and if Banri’s condition is metaphorical for age related conditions such as Alzheimer’s or dementia, then it does a convincing job in encouraging the young folk watching to cherish the precious moments of today for tomorrow they’ll be gone.

Despite their many faults – it is really hard not to be at least charmed by Kouko – the well-drawn characters play a huge part in creating a warm and comfortable atmosphere for the audience to immerse themselves in, while becoming thoroughly invested in the high and lows of their interpersonal relationships.

The supernatural element might be a plot device too many for some but Golden Time has a strong enough story and engaging cast of characters to compensate, succeeding in giving us a charming and joyous slice-of-life drama for the ages.