WWE – Straight Outta Dudleyville – The Legacy Of The Dudley Boyz 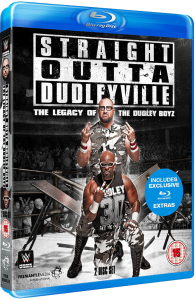 When discussing the greatest tag teams of all time it is usually older names first to be mentioned – Road Warriors, Midnight Express, The Steiner Brothers, Rock ‘n’ Roll Express, Hart Foundation, British Bulldogs, The Rockers, etc. But earning definite consideration by bridging the gap between the classic and modern era of tag team wrestling via their longevity and achievements is the duo of Bubba Ray and D-Von – the Dudley Boyz.

This career retrospective from WWE Home Video is another slick presentation of the team’s history and their lives as we meet the men behind the most decorated tag team in wrestling history. It is hard to believe that the foul mouthed, antagonistic preacher D-Von Dudley is actually the softly spoken product of a religious household, Devon Hughes while behind the bile spewing bully Bubba Ray is the jovial and respectful Mark Lomonaco.

We hear from friends and family about how both men became obsessed with wrestling at an early age (Lomonaco was actually in the front row at the famous MSG show with the Jimmy Snuka cage dive onto Don Muraco, also attended by Tommy Dreamer and Mick Foley) and how they grew up fairly close to each other in New York without realising it until they met in ECW.

D-Von fondly recalls his training with WWE Hall Of Famer Johnny Rodz (as does Tazz) who later trained Bubba, but only after he wasted time training under someone he refused to name or credit on screen (former WWF jobber Sonny Blaze) as Bubba believes he was defrauded and poorly taught.

Rare archive home video shows Bubba in his Mongo Vyle persona which was the one he took to ECW. Rather amusingly Bubba explains the first time he saw ECW on TV he thought “What is this crap?”. His friends dragged him to an ECW show nearby where Bubba decided to ask for a possible try out. Heyman had Bubba (as Vyle) take a chokeslam from 911 and hired him straight afterwards.

Raven explains how he came up with the original Dudleys concept came of a clan of similar looking inbreds, which Bubba joined in 1995 as, a cheery, dancing guy with a stutter. D-Von arrived a year later as the bullying older brother, his character based on Mr. T and Samuel L. Jackson from Pulp Fiction. Eventually Bubba turned heel and teamed with D-Von, signalling the birth of the Dudley Boyz we know and love today.

They tore through everyone in ECW until 1999 when the WWE came calling – or rather didn’t as Bubba reveals an odd tale about how he felt the WWF should make the first move while the WWF was waiting for them to call; it ended up with a mutual friend connecting a phone call from Bubba to Vince Russo to start negotiations.

Bubba explains how they feared the jump to WWF would go when the Public Enemy bombed in WWF a few months earlier after a fall out with the APA which extended to the ring and resulted in a brutal beating for PE. Of course the Dudleyz first feud with the APA and they received the same treatment but unlike the PE, earned the APA and the locker room’s respect.

You can’t talk about the Dudleyz first WWF run and not mention their tables/TLC matches and this gets thorough discussion with contributions from Edge and Christian and Spike Dudley. The splitting of the team in 2002 is covered with bubba being unhappy while D-Von admits he loved the Reverend D-Von gimmick and was sad it didn’t take off. No mention of Batista being his second during this run.

Surprisingly – or perhaps shockingly – the team’s time in TNA is brought up, complete with photos and the company name referenced at least a half dozen times. While no gimmick names were ever mentioned, they acknowledged the team’s success, their concurrent work in Japan and the solo run of Bubba (as Bully Ray) where he won the TNA World Title.

In covering the return to WWE last year, we learn that it was  a huge secret and they were hidden on a bus until the last minute (like Sting’s debut before them), and it is pretty clear they are happy to be back and perhaps end their careers where they made the biggest splash.

To show how much they genuinely love the business we see footage of them running classes in their own Team 3D Academy, with a comment from student and NXT favourite Leva “Blue Pants” Bates. When they do stop wrestling their future is safe in training future wrestlers, with some students having worked in TNA and NXT.

Current WWE wrestlers and ECW alumni (but not Heyman) are on hand to share stories and offer insight into the background and career of our subjects, along with family members and friends. It is with some irony that this release comes shortly after the Boyz have turned heel on TV when they come across so well here and are highly regarded, but WWE has always experienced unfortunate timing on that front.

A ever there is a healthy selection of matches included, largely culled from their WWF/WWE days but fans unfamiliar with their early ECW incarnation will be in shock at their characters and goofy appearance too! The constant chair/weapon shots to the head are a bit of a worry to watch but the matches are a unique slice of history.

Perhaps somewhat belated but also timely with their return to WWE, Straight Outta Dudleyville offers fans of the Dudleyz the comprehensive and enlightening look at this legendary tag team they’ve been waiting for.