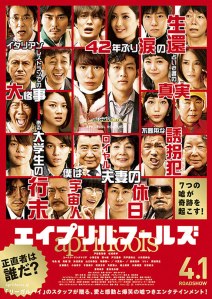 I suppose if I had thought about it about more I should have waited a few weeks and watched this film on April 1st (although February 29th is an auspicious date in its own right) but then again some people might have assumed it was a joke post.

At that in essence is the theme of this comedy drama portmanteau film which marks the theatrical debut for TV director Junichi Ishikawa – do we take April Fool’s Day so seriously that we are distrusting of everything we are told on this day? And conversely what if we believed everything we hear on this day too?

This collection of individual stories all set on April 1st begin with a shut in schoolboy (Seishuu Uragami) reading a website supposedly created by Alienoids and believing he is one of them. Then a TV station has a report on a missing man (Katsuhisa Namase) being found after forty years in the wilderness.

Meanwhile a socially inept hospital cleaner Ayumi Nitta (Erika Toda) calls up doctor Wataru Makino (Tori Matsuzaka), with whom she had a one night stand, that she is pregnant, which he doesn’t believe because of the date. As a young schoolgirl (Minami Hamabe) is riding her bike to school she is stopped and abducted by a gangster (Susumu Terajima) and his gormless sidekick (Tsutomu Takahashi).

Elsewhere a rich couple representing the Japanese royal family (Kotaro Satomi and Sumiko Fuji) are on a day out with their newly hired chauffeur (Kenichi Takito) and ask him to take them to places the average Joe would frequent. Finally a police detective (Masanobu Takashima) is questioning a so-called psychic (Lily) about her fraudulent readings despite her telling him he will finally arrest a criminal who has evaded him.

Plenty of story threads to keep track of (with some more I’ve not even featured) so the focus shifts from each one, expanding the scenarios with the deepest source to mine while others crop up when a change in mood is required. Junichi Ishikawa and screenwriter Ryota Kosawa masterfully ensure that the switches aren’t jarring or cause confusion, a rare feat in juggling so many disparate skeins in one film.

As each thread progress the true theme reveals itself – that lying is a curious trait of human nature which has both benefits and downsides depending on how fate wishes to interject itself. The significance of the date is something of a McGuffin in that it is a circumstantial catalyst for the various situations to unfold, yet also plays an integral part in influencing the outcome.

The reason the above summaries are so brief is that going into detail would be practically recapping the entire film which isn’t the purpose of a review. But it is necessary to expand a little on the story featuring Ayumi and Wataru as it is the centrepiece of the whole film around which many of the splinter threads are attached.

Ayumi learns that Wataru is in an Italian restaurant with the glamorous Reiko (Nanao) and confronts them with her pregnancy in person, which Wataru scoffs at. So, a distraught Ayumi pulls out a gun and holds the entire restaurant hostage until Wataru takes responsibility.

Seasoned Japanophiles will be expecting a large dose of slice-of-life quirkiness in the comedic parts of this film and of course Ishikawa obliges. Nothing is too outrageous or so incredulous that we need to suspend our disbelief, unless you don’t believe in fate, in which case the ultimate converging of the various stories – be they incidental or directly related – will feel like a huge contrivance.

The tone flits between comedic and dramatic with a bittersweet touch which only becomes a little cloying in the protracted final act but not enough to ruin the edge of the other two moods. Arguably the most “serious” tale is that of the royal couple and for good reason (which I won’t spoil) making it the most conventional one of the bunch.

Ryota Kosawa must have been paying close attention to the films of Yoshihiro Nakamura who also deliver convoluted plots revealed in piece meal fashion before coming together for the finale. It takes a while before we realise there is an intentional overlap of the stories but one also needs to pay attention to the seemingly innocuous scenes too as they also play an integral part in the final puzzle.

The characterisations are distinctly Japanese for the most part, especially in Ayumi’s arc and that of the abducted schoolgirl, making their behaviour seem baffling to anyone not familiar with Asian culture. But it is this very different take on the situation which makes this such an appealing and enjoyable film, as well as the fact that the moral questions raised are not force fed to the audience or bludgeoned into our heads with the Obvious Hammer.

With such a fast moving and scene jumping film it is difficult to single out any of the cast for individual praise, not to mention that their scenes call for a different performance. Many of the major stars will have their fans so they are catered for while the brief cameos from other familiar faces offers a nice little “spot the star” game for the truly dedicated Asian film fan!

Suffice to say everyone throws themselves into their roles to make the characters as believable and alive as ever, and as a director Ishikawa transitions very well from the small screen to the big screen, enjoying the increased budget but being careful not to go overboard with the presentation to overwhelm or obscure the story.

The final act is a little longer than necessary and a little heavy with the tear baiting but taken as a whole, April Fool is a cleverly constructed meditation on lies and the lying liars that tell them and is worth a look if you prefer your Japanese films with a delightfully quirky touch. Honest!