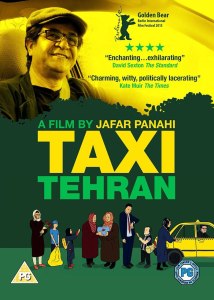 You can’t keep a good filmmaker down.

Being placed under house arrest for six years on charges of supposed “crimes against the state”, given a twenty year ban from making films and prohibited leaving the country, hasn’t stopped Iranian director and pro-Democracy campaigner Jafar Panahi from continuing to make a living in his chosen field.

His 2011 outing This Is Not A Film was secretly filmed whilst awaiting the verdict of his prosecution and smuggled out of the country on a USB stick hidden in a cake. 2013’s Closed Curtain was also shot in secret at Panahi’s home whilst naming him as co-director technically circumventing the ban.

Taxi Tehran sees Panahi once again operating in guerrilla mode to bring us a curious yet enlightening “docufiction” about life and social issues in modern Iran. Assuming the role of a taxi driver Panahi stages a number of semi-improvisational conversations and happenings filmed by a dashboard cam, each one serving as a surreptitious way to reflect the reflection the opinions of the repressed and conformist voices.

Via the eclectic personalities who make up Panahi’s fares (none of whom he charges) we are given the opportunity to eavesdrop on the candid thoughts of the ordinary folk of Tehran while Panahi tries to remains as passive and neutral as possible in order to keep his identity hidden which lasts all of ten minutes!

First to blow his cover is a midget DVD bootlegger who walks around with a holdall full of the latest films and TV series from overseas, naturally a fan of Panahi’s. Obviously a real bootlegger wouldn’t want to be caught on camera but the message was clear that the Iranian government can’t stop the presence of western and other international films in their country.

On a similar note, Panahi picks up his young niece Hana – I’m not quite sure of her exact age but she is extremely precocious and drinks frappuccino – who is also studying film. Her teacher assigns them the task of making a film which must adhere to a number of strict rules. Hearing this list it makes us wonder how any films are made in Iran with such restrictions as no Iranian names only Islamic ones, no ties on good guys, respecting Islam, etc.

The key point of this discussion, aside from illustrating the limitations filmmakers like Panahi faces, is about what makes a film “distributable”, something young Hana doesn’t understand since she only sees things in black and white, or “real” and “in films”. Panahi can’t explain it properly but the viewer aware of his plight will know this is his way of exposing this and unloading his frustrations to the world.

One of the more grim scenarios follows a victim of a hit and run accident essentially forced upon Panahi along with his distraught wife. Believing he is not long the world the man records his will on Panahi’s phone, basically stating she is inherit everything even though the law says his estate will go to his brothers as they have no children.

It is eye opening moments like this in which the absurdities of the out dated patriarchal society of Sharia Law are not only subject to the trenchant opprobrium of a free thinking filmmaker but gives food for thought for those of us on the outside looking in. Despite the shiny cars, the iPads, the expensive suits, the glossy shop fronts and the overall pleasant appearance of downtown Tehran, the stench of oppression is very much a cloying presence in the lives of the people.

So how does Panahi keep getting away with making films and ones which are so critical of the very regime he is scolding? For a start they are not released in his homeland (quelle surprise) and even then Panahi is tied to some protocol; for example, he is not permitted to run any credits so only his name appears on it but he does gave his thanks to all contributors.

Having been smuggled out of Iran and released abroad only where they can’t be touched, the films are a source of embarrassment to the Iranian authorities but even they know that their reaction is going to be under close scrutiny should they chose to respond angrily or reluctantly laugh it off; in other words they are damned if they do and damned if they don’t.

Panahi’s previous works have always been defiant and as critical as possible of the injustices and hypocrisies that blight the freedoms of the people. His 2006 opus Offside is a superb example – the story of a group of women trying to watch a football match when only men are allowed in the stadium. It is a hugely frustrating experience to watch such inane and petty discrimination unfold even in fiction form but Panahi excels in humanising his subjects.

Even though the skits in this film are partially staged this remains a very stark and honest work and the pseudo-documentary style allows for the lines between reality and fiction to be blurred to a point of disarming the viewer as to what we are watching. That would be the officious and censorial viewer – the rest of us are in on the ruse and are waiting for that knowing fourth wall breaking wink to come from Panahi.

The greatest compliment one can pay this film is how it feels like a complete work of construction with a sequential narrative yet is played out like a voyeuristic review of covert footage whilst all the same should be applauded for the brilliant piece of acerbic guerrilla filmmaking it is.

Whether film truly has the power to bring about change through its educational value is open to much discussion but a bold, openly subversive and rebellious work like Taxi Tehran can be held up as totem for how to defy the odds and get your message across in the process.