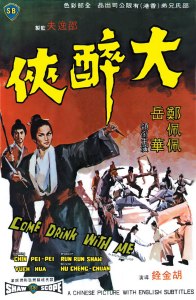 In the world of martial arts cinema the second feature from the legendary King Hu is considered a watershed film in revolutionising the wu xia genre. Hu may have eclipsed himself with later works Dragon Inn and A Touch Of Zen, but Come Drink With Me was the one that put him on the map.

A simple story – a government official (Wong Chung) is ambushed and kidnapped by a group of bandits fronted by Jade Faced Tiger (Chan Hung-lit), who hold him hostage in negotiating the release of their imprisoned leader. Sent on behalf of the governor to handle he negotiations is the feared swordsman Golden Swallow who is actually the hostage’s sister (Cheng Pei-Pei) disguised as a man.

Having demonstrated how dangerous she can be by defeating the gang members single handed, Golden Swallow relies upon the knowledge of local beggar Fan Da-Pei aka Drunken Cat (Yueh Hua) to avoid further attacks from the bandits and the whereabouts of her brother, leading Golden Swallow into the lair of Jade Faced Tiger and his master the evil Abbot Liao Kung (Yeung Chi-hing).

The plot is flimsy in its basis but it does fan out to be about a lot more than Swallow’s quest, eventually turning into Da-Pei’s battle with his past. The changeover from one plight to another is rather subtle to the point the viewer doesn’t quite notice although it is a little disappointing in that having Swallow as the prime butt kicker is quite a progressive move in an era of the kung fu macho man.

If you haven’t guessed already, the Drunken Cat is no ordinary beggar – he is a kung fu master in his own right and has a history with the formidable Liao Kung, which may explain why he surreptitiously helps Swallow out, guarding her while she sleeps and just happening to be in the area whenever she confronts the bandits.

Seasoned martial arts fans will find many of these plot points and tropes to be familiar fare, what with the production line turnout of these films in the 70’s and early 80’s once the genre really took off. Naturally it had to begin somewhere and whilst we can be certain this was hardly new even when King Hu made this film in 1966 for many it stands as an introduction to these kung fu staples.

Hu and Ye Yang’s script however does its best to avoid the many clichés the countless number of films which came in its wake and presents us with a protagonist who is reluctant to use his abilities, dedicating his life to helping others, illustrated not just be how he allows a small group of children to journey with him and sings with them at inns for food.

And in what must be a rarity for an action movie, there is no teased romance between Swallow and Da-Pei at all – his aid and acts of chivalry towards Swallow are entirely honourable and their fleeting relationship purely platonic. Da-Pei is also the only person who is able to recognise that Swallow is female something which only the audience are able to discern from the onset while the rest of the cast think she is male.

While Swallow’s character isn’t quite so fleshed out as Da-Pei’s she is still an engaging person to follow and root for during the moments her story is the main focus. When “disguised” as a man she carries herself with a sense of importance and steely swagger while her fighting prowess is superior that her male challengers, fending them off with barely an effort made.

Swallow is of course no less formidable a fighter when she is in back in her frocks, her style being the two sword technique with some impressive gymnastic moves to keep her opponents on their feet. She is clearly someone who doesn’t see her gender as a handicap nor does she use it as a weapon to disarm her male foes, letting her masterful sword skills do the talking.

For modern audiences who count Bruce Lee and early Jackie Chan films as “old” will find the steady pacing of the story and the deliberate staging of the fights a letdown but this would be missing the point. By keeping things measured and the action sporadic Hu allows us to savour each moment and follow the battle rather than miss things through a flurry of moves and quick edits.

One can see a slight nod towards Kurosawa in these deliberate and quietly played out fight scenes with their short bursts of action accompanied by ominous musical motifs. The choreography may look rudimentary and not particularly impactful but it is graceful and precise, giving things a touch of legitimacy amidst the excesses of the wire work and other extraneous flourishes.

Hu’s casting of striking ballet dancer Cheng Pei-Pei as Swallow was a masterstroke. She has the poise and skill to handle the physical aspect of the role, while her disciplined posture gives her an air of authority. For Peng this was her breakthrough role and the clear model for future female martial arts character – for instance, Michelle Yeoh and Zhang Ziyi’s characters in Crouching Tiger Hidden Dragon in which Cheng ironically also starred!

Yueh Hua plays Da-Pei as a largely comic figure for the most part but is able to quietly bring out his serious side when required in the final act. Hua acquits himself in the fight scenes although his showdown with Liao Kung is bogged down with cheesy effects and choppy editing to fully reveal the extent of his abilities.

If one can look past the fact that Come Drink With Me is very much a product of its time, there is a fascinating viewing experience to be enjoyed here in discovering the template for the modern wu xia film as we know it, and another bona fide Shaw Brothers classic to boot!