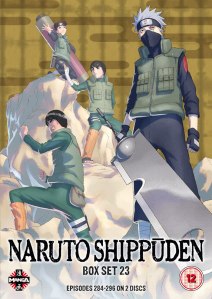 Fans of the now completed anime Bleach will be well aware that its infamous Arrancar Arc was arguably one of the most protracted sagas in the history of anime, taking over two years to reach its conclusion due to the number of times it was forced to stop while the manga got ahead, leaving us with numerous filler episodes in its place.

It would appear for Naruto fans that this has been taken this as a gauntlet being thrown down as Studio Pierrot are hell bent on having The Fourth Hokage War arc be subject to a plethora of interruptions too. Having only just returned to the main story in the last release following a filler break we find ourselves once again in interruption mode.

To be fair the bulk of the episodes on the first disc in this release are set during the current time frame of the Hokage War, so while not directly canon we can be generous and refer to these as “congruent filler”. The downside for fans of the titular hero is that he barely features at all, aside from a couple of very brief cameos to remind us he is en route to joining the battle.

What this does is to allow many secondary and periphery characters to have a moment in the spotlight while others are afforded a look into their past – a popular template for filler episodes – to further flesh out the reasons for their current personality traits. Artist Sai reveals the story behind a sealing technique he is trying to master, while a startling revelation is shared concerning Lady Tsunade which will both shock and amuse a lot of fans.

Elsewhere an episode is dedicated to the teacher-pupil relationship of two ninja from the Hidden Sand Village as a valiant fighter named Maki is forced to confront her idol, the heroic Pakura, now one of the reanimated warriors controlled by Kabuto Yakushi. Finally Kakashi heads a team caught up in a tussle with the resurrected and still powerful Ringo Ameyuri, one of the Seven Ninja Swordsmen of the Mist.

However the real story of this collection is the mini-arc which takes up the bulk of the second disc, the Chikara (Power) arc. It would appear that this was originally supposed to be a film but was instead split up into six TV episodes to make up six weeks of TV before the return to the Hokage War arc. Either way this is in fact one of the stronger filler/non-canon stories to appear in the Naruto universe and the clear highlight of this release.

Set after the Kage Summit and before the Hokage War, the Tonika Village in a location known as “The Hole” is under attack by Kabuto and his reanimated shinobi. Team Kakashi – Naruto, Sakura, Sai and Yamato – have been despatched to investigate the attacks, with Naruto and Sakura heading to the village water hole where they encounter Kabuto, who reveals his plans to sue the water hole to reanimate Akatsuki ninja Hidan.

During a fight Naruto is swallowed by a giant snake, yet while he escapes his body has been infiltrated by little snakes which are stealing his Fox Demon chakra. Kabuto is able to create a Four Tailed Demon Fox clone which is able to steal more chakra while the snakes continue to disable Naruto.

Central to the story alongside Naruto’s internal struggle with these parasitical snakes is the heart-warming tale of Dokku and Shiseru, the latter an officer of the Hacho Village, the former a kindly teacher. They have been childhood friends until an accident which caused both to bury their feelings for one another.

What makes their relationship an integral part of the story is how they look after orphaned kids despite not being a couple or Shiseru’s inability to have kids of her own. Because of Kabuto’s attacks, Dokku and Shiseru have taken in two more orphans, Leo and his four year-old sister Miina, who was left mute due to the trauma.

Anyone who has followed Naruto’s standalone films will have surmised that Miina is fulfilling the role of the anointed one with the latent special ability which will aid Naruto in his ultimate victory. While this is certainly true the script is clever enough not to focus too heavily on this, giving the youngster a chance to shine on occasion, keeping her true worth as ambiguous as possible.

From the opening frames of the first episode the difference in the quality of the artwork and animation will be wholly evident, supporting the above theory of this being earmarked for theatrical release. The character designs show a subtle diversion from the usual Naruto models, recalling the Paranoid Agent era of the late great Satoshi Kon, with the figures noticeably missing any strong outlines to their features.

The production values are palpably superior to the episodes which precede and follow it, evident in the detail of the backgrounds and set pieces and in the extravagance of the battle scenes which are a rich flourish of vibrant colours and energy to capture the bombast of the fantasy mayhem on display.

For this DVD release we have been treated to the director’s cut of the opening episodes which are structurally different from the TV version and contain bonus footage to boot. If this was ever to be re-cut as a film it would stand as one of the stronger entries into the theatrical adjuncts but as it stands, it makes for a superb mini arc which compensates for the latest break in the main story.

Speaking of which the final episode in this set is a return to canon and with Naruto in control of a devastating new technique the next few instalments, should they stick to the main story, look set to provide much excitement as a reward for our patience during this diversion from the Hokage War arc.