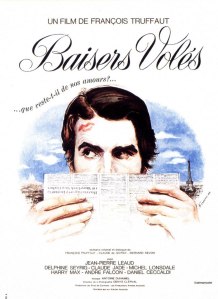 I approach this film at a slight disadvantage, not just because I wasn’t overly enamoured with Truffaut’s celebrated Jules et Jim, but because Stolen Kisses is a continuation of the story begun in Truffaut’s debut film The 400 Blows, which I have not seen.

This is the third of five films to feature the semi-autobiographical character Antoine Doinel as played by Jean-Pierre Léaud, who stayed the course from The 400 Blows in 1959 all the way to Love On The Run in 1979. In this part of Antoine’s journey, he is discharged from the army and returns to civilian life with no job prospects and yearning for his girlfriend Christine Darbon (Claude Jade).

Serving as the fulcrum for the story is Antoine’s unsuccessful employment history which begins with a brief stint as a night shift hotel receptionist, courtesy of Christine’s parents (Daniel Ceccaldi and Claire Duhamel) and ends with a run as TV repairman. The bulk of the proceedings focus on Antoine’s time as a private detective, a job he lucked into after an infidelity sting at the hotel.

Displaying the same level of ineptitude as in his previous jobs it is a wonder that Antoine lasts as long as he does in this one – he is constantly being spotted by the people he is trailing, loses his targets and reporting back with largely ineffective information. One job comes which Antoine’s employer Monsieur Blady (André Falcon) thinks even he can’t stuff, which involves him working undercover at a shoe store to discover why the boss Georges Tabard (Michael Lonsdale) isn’t liked or respected by his female employees.

True to form, Antoine blusters and fumbles his way through the job with alarming ease to the notice of everyone, except Tabard’s glamorous wife Fabienne (Delphine Seyrig). When learning of Antoine’s giddy attraction to her, Fabienne goes into full Mrs. Robinson mode, adding another threat to the already strained relationship between Antoine and Christine.

Having not seen the previous films it is a little difficult to see where Truffaut is going with the character of Antoine, whether his awkwardness and “square peg” syndrome is indicative of him or exclusive to this story. One has to assume there is continuity in this regard but it helps to know this beforehand in order to follow the narrative, which is either Antoine trying to find his place in the world or simply a tale depicting the trouble with love.

Knowing French New Wave and Truffaut (even as fleeting as I do) the latter option is the least likely, being a less challenging topic for exploration. The film has a very light tone which borders on the comedic without overtly succumbing to the conventions, although the sings are clear we are free to laugh if we so desire. Antoine is presented to us as a slight buffoon, well meaning and earnest but incompetent, bordering on a lightning rod for calamity – I’m tempted to say he’s a Frank Spencer without the beret.

Everyone seems to like Antoine and Christine clearly adores him so he is not short of opportunities and support but something is missing that prevents him from having that perfect life he so dearly wants, and possibly thinks he has in the grand scheme of things. Many of the people he encounters and associates with in the film are just as plagued with problems and personal shortcomings but still exist well enough, so what is the magic ingredient that they have and Antoine doesn’t?

I may be way off the mark but that at least was what I gleamed from this film, which doesn’t have much of a linear storyline, more of a chronological compendium of events in Antoine’s life laid out for our amusement. There is also an apparent critique on 1960’s France, portraying Paris as one full of untrusting people with a failure to communicate; the fact Blady’s detectives are always busy is a sad indictment of this.

Even if Truffaut was being largely jocular with this film, his defiant side was displayed at the very start: a close-up of a sign on the gates of the Palais du Chaillot reads “Closed”, a protest in reference to the French Government’s sacking of Henri Langlois, a preeminent figure in the conservation of French cinema. This means nothing to modern viewers but at the time it was a potent – and effective – political statement.

As a comedy there isn’t much to laugh at per se – aside from a blooper where one actor trips over during a scene and another fails to hide his amusement – but that doesn’t stop it from being gently amusing, largely through Jean-Pierre Léaud’s energetic and wonderfully dead pan performance. He manages to persuade us that Antoine is a clown without resorting to slapstick or extravagant comic set pieces, his bemused expression and gormless reactions convey this perfectly.

Léaud is surrounded by a sturdy cast of already well known faces including the likes of Michael Lonsdale, Delphine Seyrig and Harry-Max, filling in the roles of the various characters who flit in and out of the story, some of whom are just as bewildered as Antoine! Newcomer Claude Jade as Christine appears only periodically but her role is vital as the one constant in Antoine’s life despite their continual near misses when it comes to spending time together.

As far as French New Wave films go, Stolen Kisses still has the convention challenging bent that made the movement so distinguishable but by the same token, the chilled out atmosphere of the late 60’s permeates through enough to make this a more accessible work. The camerawork and editing is still snappy and vibrant while the musty colours of the period give the film a strange autumnal melancholy.

I’m sure I missed the point of Stolen Kisses coming into the Antoine Doinel saga at this late stage but I found this an easier film to enjoy than Jules et Jim. Sorry Truffaut fans.