Stations Of The Cross (Kreuzweg) 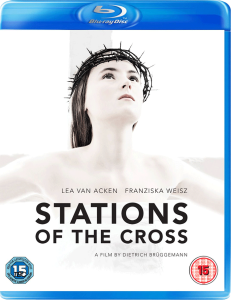 Stations Of The Cross (Kreuzweg)

Religion is a tricky subject for any filmmaker to tackle, regardless of their views or intentions behind it, with readymade opposition waiting to jump on it for the slightest reason. As an atheist it is also hard to watch such a film with some objectivity for fear of finding the piousness of the content frustrating and tough to swallow.

Stations Of The Cross is a film that isn’t an attack on religion but is a stern and profoundly upsetting indictment of the fanaticism prevalent among the devout. Writer Anna Brüggemann, sister of the film’s director Dietrich, based the script on their real life experience with a strict church thus knows whereof she speaks, adding further pain to what is already an unsettling story, similar in impact to Cristian Mungiu’s frightening Beyond the Hills.

Central to the story is 14 year-old Maria (Lea van Acken), one of four children of a fundamentalist Catholic family who have eschewed much of modern life and its attitudes in the name of their faith. The youngest child, four year-old Johannes (Linus Fluhr) has yet to speak and while a doctor has diagnosed possible autism, Maria is convinced it is God’s will. After a serious lecture from Father Weber (Florian Stetter) of the austere Society of St Paul church, Maria decides she must sacrifice herself as a saint in order for God to make Johannes speak.

Extremism in religion is not limited to Christianity as many current atrocities in the news today will attest so don’t assume this is a case of victimisation – it is after all a work of fiction albeit one with a factual base. This in itself is an interesting point when late in the film, Maria’s ferociously devout mother (Franziska Weisz) states that “religion is based on fact” a contentious point if ever there was one.

Through the fixed gaze of a static camera the story unfolds through fourteen short scenes directly representing the Stations of the Cross that Jesus endured on his path to Golgotha. Each scene is captured in a single shot, suggesting a single take which takes some doing with both the hefty dialogue and emotional weight of the material and actions required from the cast.

In the name of balance, many of the characters are churchgoers and worshippers but do not subscribe to the same extreme views of Maria’s diocese. This extends to a Christian (Moritz Knapp) – a boy who tries to get to know Maria but is rebuked for singing gospel at his church and making her have unchaste thoughts – and a sports teacher with whom Maria argues over the “satanic” pop music that plays during an exercise session.

The other kids naturally tease Maria for this and ordinarily we should support her as a victim of bullying but part of us can’t help but feel that perhaps this humiliation might serve as a wake-up call to the ignorance Maria has been hitherto fed. The reason for such an uncharitable suggestion is due to how Maria has been starving herself and depriving herself the simplest care hoping to expediate her meeting with the man upstairs.

Maria’s descent into effective martyrdom/sainthood (call it what you will) is gradual but the lack of a truly balanced opinion and the relentless onslaught of Father Weber and her mother’s stringent enforcing of their church’s doctrine, a tragic end is all but guaranteed. Certainly others try to reason with Maria but she remains steadfast, largely through the fear of sinning and being rejected by her family, in lieu of there being no demonstrable evidence of their teachings being right.

Her one saving grace is the family’s au pair Bernadette (Lucie Aron) whom Maria idolises and wants to be like. She too admits her belief in God but not one who is so malevolent that he wants his children to deny themselves or die in his name. While Bernadette makes the most progress with Maria – much to her mother’s chagrin – it still isn’t enough and even with doctors and other concerned parties voicing their sensible and just opinions, Maria won’t budge.

Through the series of Bergman-esque skits the question asked is how can someone live in a world which they have been taught not to trust? Maria is caught in an endless circle of conflicting advice, and stuck amongst a community that doesn’t share or understand her own values. The one place she turns to for guidance is proving counterproductive but only she can’t see that, and this makes for a horrifying narrative.

As mentioned earlier the camerawork is frugal and impassive, reflecting the austerity and simplicity of the world Maria inhabits, yet while we are observers we do feel somewhat in the heart of the moment. It doesn’t sound exciting but it suits the film perfectly, reaffirming that less is indeed often more. Every one of the fourteen tableaux is awash with bright colours and presented in pin sharp clarity, ironically contrasting the bleakness and sparse details of the scene and the story itself.

It is a potentially sad thought that newcomer Lea van Acken may not deliver another performance as startlingly real and emotionally resonant as this remarkable essaying of Maria. Presented as a gamine, brittle confused girl with an internal but misguided strength van Acken attacks the role with disarming precision for such a young inchoate actress, especially under the pressure of the long single take format.

The rest of the cast are of course subject to the same procedure and they each rise to the occasions, with the second nod of praise going to Franziska Weisz, portraying the pious mother with such intensity she is practically the very demon she prays against.

Whether you are of faith or not, Stations Of The Cross is a hard film to watch and will divide opinion and encourage debate as it should. The non-didactic approach and superb performances make this a compelling and potent, if heartbreaking, viewing experience.