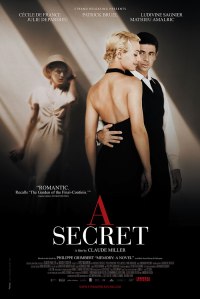 Quite often when a film set during the war bears the accompanying legend “Based on a True Story” it is not uncommon for some viewers to reach for a bag of salt before settling down to watch it. However, in this case such cynicism is not applicable the true story in question that provides the basis for A Secret comes from the real life tragedies of noted French psychoanalyst Philippe Grimbert.

It is quite an extraordinary story, given a dramatic overhaul by Grimbert whose idea to novelise his thoughts and feelings about his family’s history was in part to aid him in dealing with the burden of the eponymous secrets and the fallout of their revelations. Adapted for the big screen by veteran director Claude Miller the story spans three time periods from the 1940’s, the 1950’s/60’s and the 1980’s.

The central figure is François Grimbert first seen as a seven year old in 1955 (played by Valentin Vigourt) – renamed from Philippe by Miller – a sickly boy, son to athletic parents Tania (Cécile de France) and Maxime (Patrick Bruel). The latter shows little interest in his son due to his lack of sporting prowess which bothers the lad so much, he invents an older, physically and athletically perfect brother in his head.

Seven years later just as François turns fifteen (now played by Quentin Dubuis) he gets into a fight at school over his Jewish heritage. Compounded by his parents increasingly odd and protective behaviour over certain innocuous things, François turns to neighbour and long time family friend Louise (Julie Depardieu), who takes it upon herself to reveal the truth behind his parents’ union and their past.

To go further with the plot summary and lead further discussion about the film itself, it is necessary to entertain some slight spoilers, so feel free to skip ahead to the end if you so wish. As you might have guessed, François did indeed have an older half brother Simon (Orlando Nicoletti), who was everything François was not. However Simon’s mother was Maxime’s first wife, a humble Jewish girl named Hannah (Ludivine Sagnier). it was at their wedding that Maxime first met Tania, Hannah’s sister-in-law, and the attraction, for Maxime was immediate.

From hereon in the story of the marriage, Simon’s birth and the continuing frisson between Maxime and Tania is told against the backdrop of World War II and the Holocaust. It should be pointed out that occasional cutaways to 1985 appear, with Mathieu Amalric as an adult François, having to help his now elderly father reconcile his actions after his dog dies. In a unique deviation from the norm, these “modern” scenes are shown in black and white while the past eras are in colour.

The tone of the script is rather observant and non-judgemental, a reflection perhaps of Grimbert’s chosen profession influencing his writing voice. With his own parents as inspiration – they committed suicide together twenty years before the book was written – and the atrocities of the Holocaust as a key subject, there is something distinctly passive about the sentiment of the narrative, with no proportioning of blame or signs of malice towards anyone, when a case for bitterness seems valid to an outside view.

Yet the cast are all flawed in one way or another which is never sugar coated, or sanitised for the sake of entertainment. These foibles and the resultant actions are all necessary components of the story itself, often providing a catalyst for the next major development. Grimbert, and by extension Miller, may have dramatised some of the events but the prevalent sensation is one of authenticity and honesty – rather ironic considering the central conceit of keeping secrets.

Indeed “A Secret” is a slightly misleading in that more than one case of hiding the truth drives this story, each one following on from the other. On a more poignant front, at least from a historical and political perspective arises over the Jewish identity shared by the principal players. While most of the family and their close knit community oblige the decree regarding Jews wearing a yellow star on their clothes, Maxime refuses to acquiesce, declaring himself as simply “French”, creating a divide among the family who simply want to get on as peacefully as possible.

If this all sounds complex and full or irregularities and incongruities fear not, it all makes sense by the end of the film. While some stories lend themselves to vagueness and cherry picking of plot points without retelling the whole, this one doesn’t fit that bill. Perhaps also to its detriment, Miller himself may have outsmarted himself with the triple concurrent storylines, his juggling of the past and the present is not as smooth as it could be.

The flitting between the time periods is as smooth as it could be, although the climax of the 1985 thread is the exact closure the tale needs. Perhaps if Miller had bookended the film with the present setting then told the past story in between, the narrative would feel less muddled. With the flashback storyline being the most effective, resonant and aesthetically immersive, the disparity in quality wouldn’t be so obvious.

No fault can be found in the performances however, the exemplary cast making for captivating viewing. Ludivine Sagnier, who has often been cast in cute or glamorous roles, goes almost frumpy as Hannah, delivering a complex and nuanced turn of some emotive depth. breaking out of the shadow of Patrick Bruel’s brooding testosterone as Maxime. Cécile de France seems almost tailor made for the 1950’s while Julie Depardieu’s Louise is the glue and conscience of this tale.

It’s rare to find a tale set around the Holocaust which avoids demonising the Nazis or manipulating our sympathies for the Jews but A Secret achieves this, despite its real life roots. It presents us with an evocative and touching drama and while not perfectly realised, the story remains impactful.