Tales From The Dark 2 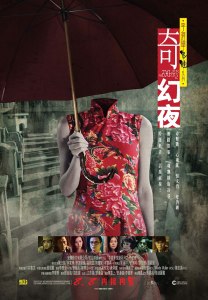 Tales From The Dark 2

As far as follow ups go, this second horror omnibus based on the short stories from noted novelist Lillian Lee hit the screens a mere five weeks after its predecessor, clearly not bothering to wait to see if the first one would be a hit. Regardless, three more directors stepped up to offer us three more tales of the macabre.

The first tale, entitled Pillow, is directed by Gordon Chan, noted more for his historical and fantasy martial arts flicks. Chow Ching-yi (Fala Chen) has a huge row with her boyfriend Yun Ho-hong (Gordon Lam) after discovering he is still seeing an ex and lending her money. After a week Ching-yi admits to a colleague that she is missing Ho-hong who has been missing since the row. Ching-yi begins to suffer from insomnia and buys a specially scented pillow to help her sleep. While in the land of nod, Ho-hong returns for some very real and passionate making up moments.

Chan adapted the script himself, being a prolific screenwriter as well as director, and it is fitting he makes his maiden voyage into horror waters with a short. This segment is the longest of the three presented here and at times it feels it, with the prolonged moments of inertia and silence. But Chan is able to create a deceptively eerie mood and keep the reveals ambiguous and distant to ensure we haven’t figured the outcome out before time.

Fala Chen takes an unusually non-glamorous role and makes for a suitably effective and convincing tormented soul while the ever reliable Gordon Lam is not given much to do but has that quiet edge to make Ho-hong seem duplicitous and a catch for Ching-yi at the same time.

Story two is Hide & Seek directed by Laurence Ah Mon which takes us back to school as a group of friends want to celebrate the birthday of Ceci (Kiki Tam) at their alma mater before it is demolished. The cranky old caretaker Uncle Chan (Lai Hon-Chi), who seems to have made his home at the school, tells the kids to go home before it gets dark. Naturally the kids ignore his warning and start to play games, one of which is a ghosts vs. humans hunting game. During this time white-faced spirits of former pupils appear around the building.

For anyone who thought the white faced, long black haired, vengeful spirit was the exclusive property of Japan (or Thailand) then this story demonstrates the Chinese are keen to have them as a part of their supernatural folklore too. Helmer Laurence Ah Mon is another horror debutante, his usual canon taking in social commentary and Cat III thrillers. It shows as there is nary an original idea shown here, the closest being the creepy apparitions starting as figures painted on a wall mural, but the cheap effects make their appearance less frightening.

He may be giving a cast of young unknowns a big chance with this clip but with such flimsy material, they can only do the best they can with it. With little new to offer, only a couple of interesting ideas and no real resolution, this is the weakest of three segments by a country mile.

The third and final yarn is Black Umbrella, directed by and starring the diminutive Teddy Robin Kwan as a wandering do gooder with the titular rain deflector. He strolls the streets of a small suburbs in Hong Kong and does a good deed where he seems it necessary, observing the different reactions his help engenders. He stops a bus driver from being robbed by a knife wielding druggy, curtails a beating for a indebted gambler and helps a desperate prostitute (Aliza Mo) get home. However the streetwalker wants to repay him in kind and the little man needs to keep himself in check otherwise…

And there we leave it but I will just tease you with the news that Robin ensures this film signs off in the bloodiest way possible! This tale is the one closest to the traditional themes of Chinese fables, playing on the “one good turn deserves another” maxim which of course gets a gory upgrade. Tiny Teddy is a big presence despite his size and plays the role like an old-fashioned martial arts seer in modern (ish) dress, always in time to prevent a calamity.

The key is how his actions are rewarded – with scorn, ingratitude or excessive gratitude with ulterior motives – and in what it is about Teddy that he has to take it in his stride. The twist at the end gives us our first true moral of the film which my resonate better with the native audiences. Kwancreates a an uneasy and pregnant atmosphere that isn’t scary but keeps us on our toes that something is going to happen and it does!

The first Tales Of The Dark film was a mixed bag in terms of content but all three segments were fairly strong – this time round we have a sandwich with somewhat nourishing slices of bread but the filling isn’t so tasty. We can’t really blame the writing as the source material came from Lillian Lee’s celebrated works so the directors and screenwriters will have to stand by their adaptation decisions.

Hide & Seek falls short mainly due to its paucity of original ideas and more importantly the scares. Pillow isn’t particularly scary either but works better as a psychological piece. Plus Fala Chen! Black Umbrella covers similar ground to both preceding segments but delivers the most on the gore front.

If this second helping of oriental scares has any upside it is shorter than the first allowing for the segments to hit harder with their comparative brevity; conversely it means you don’t have to wait long until the next one if you aren’t entertained! Tales From The Dark 2 isn’t perfect but offers a quick spooky snack if you need it.

3 thoughts on “Tales From The Dark 2”