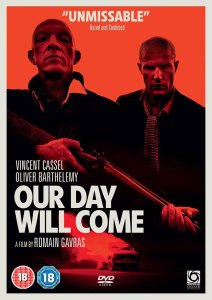 In society there are always people outcast or picked on for their physical appearances, and one maligned group are red heads. For some unexplained reason, people with red or ginger hair are considered an oddity, thus are mercilessly teased for this genetic phenomenon.

But what if they had enough and decided to fight back? That is pondered in this idiosyncratic film from Romain Gavras, ostensibly a worm that turned-cum-road movie with a huge chip on its shoulder commensurate to that of the two main characters, that may not garner much sympathy for its cause as it intends.

Patrick (Vincent Cassel) is a counsellor with a bad attitude; Rémy (Olivier Barthelemy) is one of his clients, a teenage boy who suffers much bullying and abuse both at home and at school. After hitting his mother Rémy is taken away for a drive by Patrick, but instead of calming the boy down he encourages his fellow redhead to stand up for himself and be more confident. Rémy decides he wants to go to Ireland where he believes redheads are treated better setting the pair off on a fateful journey in many ways.

One thing that immediately leaps out at the viewer is how neither of our enraged ginger nuts are in fact that ginger. Patrick has a few strands among the tousled strands on the top of his head while Rémy’s is arguably more dark chestnut than anything. Bit of a setback if it is central to the specific point to make but we’ll have to work with it.

Gavras directed a music video entitled Born Free for a rapper called MIA, depicting the execution of redheads in a futuristic setting which caused much controversy. This film is an extension of that but less disturbing, presumably wanting to avoid the same censure for this film that the music video received. To that end the main story is a parable on discrimination in the modern world and how one can suffer through a variety of mediums and not just typical juvenile name-calling.

Rémy is constantly hassled during a football match, by his own teammates as is a fat lad who refuses to shower, both embarrassed about their bodies. At home his sister spits insults at him which causes Rémy to snap as he is desperate to use the computer to contact a girlfriend he has met online who is threatening to harm herself. Rémy insists Patrick drives him to find the girl, only to discover she is in fact a Goth boy, subjecting Rémy to further public humiliation.

Patrick’s remedy for this is to start a fight in a cafe with some large Arab men before picking up some random teenage girls, under the pretext of Rémy being a shy Russian kickboxer looking for some fun. He instigates many illicit activities to get Rémy out of his shell, while blowing off some steam himself, in particular insulting a Jewish car dealer and walking away with a flash (red) sports car.

After seeing a pamphlet for Ireland, Rémy has a goal to aim for and when Patrick seems to hit a melancholic wall, the roles switch and Rémy is the one in charge, leading Patrick by pointing a crossbow at his head. As the film goes on, Patrick has created a monster but he himself isn’t too far from going off the deep end either. Eventually he flips out and shaves his hair, beard and eyebrows off which Rémy later copies and head off on a violent path to the ferry to Ireland.

It is halfway through the second act that Gavras seems to have experienced his own change of personality, taking the narrative into a surreal and nihilistic route with little care for cohesion. When the duo stop off at a small hotel, there is a little redhead girl (Chloe Catoen) who sits silently with them wherever they go inside the hotel. She is at poolside with a group of naked English girls and she is in their suite where Patrick and he girls get to know each other.

While the change in the personalities of Rémy and Patrick appear extreme the essential core traits where always edgy to begin with, establishing the fact that a dangerous side was inherently present. It isn’t like they were nice guys doing a one eighty, they were troubled from the start. When we first meet Patrick he is listening to a client sobbing her heart out because she can’t afford to eat and opens up a packet of crisps!

Before things got a little weird and indulgent this was starting to be a decent look at two people fed up with social ignorance towards them and their lone war in taking a stand for all redheads. To this writer, Gavras seems to be living vicariously through his characters and is using them to live out fantasies maybe he had as a teased child. The inference here is that the first part of the film was the moral indignation, the second half is some kind of personal wish fulfilment in the name of art.

Vincent Cassell is an actor who enjoys a challenge and Patrick is another interesting role for him to get his teeth into. In the earlier stages Patrick has the swagger of Mesrine, in the second the Cassel from La Haine shows up and is a visceral, combustible madman. As always Cassel is a mesmerising presence, overshadowing his younger cast mate, Olivier Barthelemy despite an intense turn as Rémy. For the most part his is a sulky and brooding lanky kid (looking too old to be a teen) who turns into an unhinged and dynamic man on a mission.

I fear Our Day Will Come’s legacy will be its divisiveness and how audiences will either find it a directionless mess or a bold and esoteric challenge against prejudice. The reality is that it is both but it is an engaging watch nonetheless.