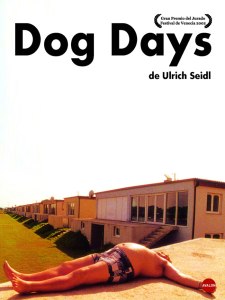 Having recently seen Austrian provocateur Ulrich Seidl’s other works, including his sublime Paradise trilogy, I was somewhat prepared to explore his controversial feature debut – at least I thought I was. Having graduated from making documentaries, which also caused some concern among the more sensitive audiences, Seidl carries on this style into the fictional arena with an extraordinary world he has created supposedly to reflect suburban Austria but feels more like a Sartre-esque nightmare!

There is no plot to speak, just the unravelling of separate strands of everyday life in Vienna during a severe heat wave involving a cast of frankly disturbed grotesque examples of humanity. There is the common theme of sex and violence which runs through each scenario and rarely do they intertwine but Seidl takes us deep into the heart of a community I am sure none of us would want to visit in real life.

As if it is a personal fascination of Seidl’s most of the characters are distinctly unlikeable with only a few partly deserving of our sympathies. I say partly as they have made their beds but continue to lie in them regardless of the suffering it incurs. This is intrinsic to one of the stories in which a forty-something teacher (Christine Jirku) suffers bullying and humiliation at the hands of her brutish younger lover Wickerl (Victor Hennemann, the real life owner of a swingers club). He shows up one night with a friend Lucky (Georg Friedrich) which the teacher clearly wasn’t expecting by the personal way she had planned her welcome. After much heavy drinking, the evening ends up with the woman bruised and abused.

Meanwhile a young table dancer (Franziska Weisz) is dominated by her hot headed, jealous boyfriend (René Wanko) who threatens every man at the club who ogles his girlfriend! Like some of the other men in the film it is the girl’s fault for making him mad, and his past bad experiences with women has left him completely distrusting. Nothing to do with him being an egomaniacal dipstick apparently.

Elsewhere a gruff elderly widow (Erich Finsches), who has a big old dog for company, is not so abusive but still a little demanding of his housekeeper (Gerti lehner), herself no spring chicken. He seems to be testing her for something but his belligerent side is reserved for the supermarkets which sell him groceries which are underweight. Having return to complain he demands compensation for both the groceries and his petrol!

Another curious relationship involves a divorced couple (Claudia Martini and Victor Rathbone) who live separately in the same house in the wake of their only daughter’s death. While she has moved on, a member of both a swingers club and dating her masseur (Christian Bakonyi), he hasn’t and goes out of his way to ruin his ex-wife’s dates.

The final arc is a two in one tale revolving local cars being subject to damage by a mysterious perpetrator. A security system engineer (Alfred Mrva) who is in town to secure some business is enlisted to help find the culprit. At the same time an obnoxious and clearly disturbed young woman Anna (Maria Hofstätter, the pious lead from Paradise: Faith) goes out hitchhiking with no destination only to then insult and infuriate her rides with her incessant chatter and probing behaviour.

I won’t reveal how these two threads come together but it is predictably unpleasant – this IS a Seidl film after all – which takes us back to the point earlier about characters who deserve our sympathy. Anna’s fate doesn’t seem fair or justified but throughout the film she is utterly obnoxious and infuriatingly regurgitation of lists of useless facts or pointed remarks about the drivers’ physical appearances. It is not difficult to want to punch her in the face, and many do come close, but in the end she becomes a victim of circumstance under a very immoral and inhumane pretence.

Seemingly a personal and professional policy, much of the cat are untrained actors basically playing themselves, or in the case of Victor Hennemann an extension of their real life personalities. Sedil asks a lot from his actors as we have seen in his filmography, and it is remarkable that he was able to find so many willing participants given the nature of the roles and their situations. Then again, as it reportedly took three years for Sedil to find the cast which suddenly doesn’t sound so surprising.

Through the naturalistic acting and cinema vérité presentation this feels like a hideous fly on the wall documentary, 127 minutes of voyeuristic cringing and disgust, which we have no-one but ourselves to blame for watching. How much of this is a critique of Austria or an acerbic satire will remain in Seidl’s head, leaving the audience to figure it out if we can. The aesthetic is refreshingly honesty with the characters being mostly older, not exactly photogenic and often overweight, and the searing uncomfortable summer heat permeates through the screen, making the viewer sweat as much as the cast do.

Much of the controversy surrounding this film was the inclusion of unsimulated sex but this is fairly brief and not all bad but for the time (2001) it was a rather bold. Compare to the way the women – and to be fair some of the men – are treated in this film, the sex scenes should really be the least of our concerns as it is one of the few occasions where a true sense of harmony is achieved.

As an unsettling expose into the darker side of humanity Dog Days paints a grim picture that will put you off humans for life. Yet for all its uncompromising opprobrium and relentless misanthropy Seidl still manages to captivate us for the duration even if we know we should turn away. Bleak and baffling but brave and bewitching.