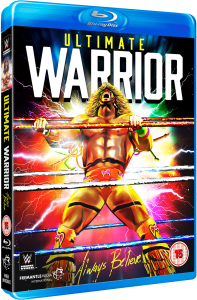 I feel I should open this review with an apology as I just can’t shake the feeling of cynicism of this title being released almost exactly one year after the untimely passing of the Ultimate Warrior. I’m sure it was meant as an honest and heartfelt tribute and I am certain it was the kind of release the WWE presumably wanted the last DVD to be but there is just something niggling me about the timing; it just feels too soon. Then again when is a good time to pay tribute to the Warrior?

Always Believe as you might expect is a complete one-eighty from the infamous Self Destruction of the Ultimate Warrior (which is discussed in this feature), with nothing but praise and fond memories shared about this colourful character and the man behind the character. It is essentially an extended remix of the feature which originally appeared on the WWE Network shortly after Warrior’s passing, with snippets and outtakes from last year’s Ultimate Collection DVD and new interviews.

It begins with Warrior’s final and chillingly prescient promo from RAW the night after Wrestlemania 30 in which he spoke these eerily ominous and sadly valedictorian words:

“Every man’s heart one day beats its final beat. His lungs breathe a final breath. And if what that man did in his life makes the blood pulse through the body of others and makes them bleed deeper and something larger than life then his essence, his spirit, will be immortalized.”

His widow Dana then gives a tearful message of thanks to the fans and WWE for their support before the programme begins in earnest, with new interview footage of Warrior relating the story of his career from a young bodybuilder studying to be a chiropractor to his start in wrestling with Steve “Sting” Borden as he is billed onscreen during his comments.

We get some (presumably YouTube sourced) of the babyface Freedom Fighters from Memphis from 1985 before Dutch “Zeb Coulter” Mantell explains how, as their manager, he rechristened them Blade Runners. They quickly mention the move to Bill Watts’ Mid South promotion which is where Warrior decided to go it alone and move to WCCW where he became the Dingo Warrior, the prototype for the character he would find global fame as just a year later in the WWF.

The rest of the story we all know as it was covered in the previous DVD only this time it is accompanied by comments from others who were either there at the time (Vince McMahon, Hulk Hogan, Sgt. Slaughter) to current wrestlers who were fans (Cesaro, Kofi Kingston, John Cena). Widow Dana and his two daughters India and Mattigan – the latter who wants to follow in her father’s footsteps – fill in the gaps about Warrior the man, the husband and the father, which reveals a softer, more thoughtful but completely dedicated side to the man most of us thought of as a raving lunatic.

Quite the surprise is how much time is given to the aforementioned Self Destruction DVD to which Warrior has nothing but justified utter disdain for and Vince is (almost) apologetic for. They show numerous negative and derogatory quotes made on that DVD against Warrior, although shockingly not Triple H’s “he was an unprofessional dick!” line, which of course would have conflicted with the teary eyed, praise and love he lavishes on Warrior throughout this presentation.

As the documentary rolls on we end up at the Hall Of Fame when the hatchet had been buried and friendships renewed. Vince says that Warrior is shedding a lot of his anxieties and frustrations built up over the years and one can actually see the man mellow before our eyes. Another ominous sign however is the sight of him walking backstage at Wrestlemania with a noticeable limp, his face red and sweating heavily. It is as if his body knew time was running out. Along with the ensuing RAW promo this is a haunting image to behold.

An awkward moment arrives as Hogan confronts Warrior backstage at Wrestlemania to apologise and clear the air. They do but one can see the reservations in Warrior’s body language but he is magnanimous enough to not make a scene out of it. The final shot of Warrior as he leaves RAW the next night sees Warrior with a beaming smile on his face, which is possibly the best way for us and his family to remember him by.

Post death and the story switches to Dana and the girls who have been taken in by the WWE family with special treatment at a RAW taping at the arena where Warrior made his last appearance. Here we learn that Nattie Neidhart stepped up to comfort the family   and has since created a deep bond with them. We then see Mattigan get some wrestling training from Nattie in the ring which is fun to watch.

The additional material includes a compilation of Warrior’s outlandish promos, many matches not included on the previous DVD – including some rare WCCW matches – and personal stories from Dana and her daughters.

Much like the start, the main feature closes on a poignant and lachrymose note yet the story is now complete. There isn’t really anywhere else for it to go and cynicism about the timing aside, this is as honest and fitting a tribute as anyone could expect to see. It covers all bases, good and bad, and provides us with a touching eulogy to one of the most unique individuals ever seen in pro-wrestling.

The Warriors Meet The Goldbergs