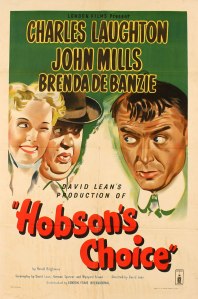 Sir David Lean is widely regarded as one of Britain’s greatest film directors, known internationally for his historical epics such a Lawrence Of Arabia, The Bridge On The River Kwai and Doctor Zhivago. yet for us Brits there will always be a sentimental spot for his homegrown films, be they adaptations of Dickens’ novels, middle classed romances or working class comedies.

Hobson’s Choice, based on the play by Harold Brighouse, is something of an amalgam of all three of these. Set in Victorian Salford, the titular Henry Hobson (Charles Laughton) is a brash, heavy drinking owner of a shoe shop, which he runs with the aid of his three daughters – Maggie (Brenda De Banzie), Alice (Daphne Anderson) and Vicky (Prunella Scales). Tired of being surrounded by three nagging females, Henry decides the two younger daughters should be married off – unaware that they are courting behind his back – but as the oldest and most experienced in the shop, Maggie is too valuable to Henry and he considers her, at thirty, past it for marriage.

Maggie takes umbrage at this and proposes to loyal but simple cobbler William Mossop (John Mills) whose work is exemplary, then leaves her father to marry Mossop and set up her own business together. This proves to be a success but Henry tries to carry on as if nothing has happened, however his drinking and truculent manner gradually gets the better of him and his health as his family life begins to disintegrate before him.

The rough edges of the Northern dialect and mercantile surroundings couldn’t be any different from the twee upper class stiffness of Brief Encounter yet both are vivid representations of Britain as it once was. Lean may have later become a filmmaker of some ambition but his films were always suffused with honesty and free from artifice. Whereas his more notable epics work because of their grandiosity a film like Hobson’s Choice works because of its humble charm.

Modern audiences may not be able to appreciate how the patriarchal whip ruled all back in Victorian households (and even into the mid-to-late 20th century in some cases) so Hobson’s announcement that he will choose the husbands for his daughters may not receive a warm embrace from today’s liberated woman. Even then, the daughters react with horror upon their father’s declaration yet yield to it rather quickly, mostly through the greater fear of revealing to him they already have suitors.

Striking a blow for feminism is Maggie who is in fact the apple that didn’t fall far from the tree – pretty much her father’s daughter sans the alcohol intake, incapacity for listening and the smaller body mass. The way Maggie bulldozes her way into Mossop’s life is straight out of Henry’s playbook, going so far as to tell the girl he is already betrothed to that their relationship is off. Then again, one look at Mossop’s potential mother-in-law and it seems he made a safe escape!

As much as Maggie accepts the usual housewife routine without complaint, she still has to take control of things – from teaching Mossop how to read and write to initiating their marriage consummation! Perhaps then, the theme of this tale was to show that the patriarchal system is all well and good but don’t discount the women out of hand because they are just as effective in love and war – and business. Quite a progressive line of thinking for 1915 (when the original play debuted).

While the film is largely a character driven piece with some joyously played out interactions between the garrulous and gargantuan Henry and his partially estranged daughter and son-in-law, Lean gets to have some visual fun with Hobson’s drinking. One great scene where he steps out after a long night at T’Moonraker pub sees Henry espy the moon reflected in some puddles which shifts every time he moves direction. It’s simple but effective storytelling to illustrate the whimsy of Henry’s inebriated state.

Later when Henry’s health hits rock bottom and he suffers a breakdown, he begins to hallucinate. Here we are treated to a horrifying vision of a swarm of flies which then converge into a giant one that lunges forward to attack! This is followed by a human sized rabbit at the end of his bed, shaking his head in judgement at Henry’s condition, presumably a nod to Harvey from a few years earlier.

Commanding every frame he is in as one would expect, British born Hollywood heavyweight Charles Laughton is on fine pompous form as Henry Hobson, as verbose and as stubborn as one can get yet is somehow so charismatic we can’t dislike him for all his ingrained faults. As it happens Laughton actually played the role of Hobson as a teenager in his hometown of Scarborough, although at this point in time he was much better suited for the role!

Acting as the perfect foil was Brenda De Banzie as Maggie, who gave as good as she got and then some. Despite being forty five at the time she only just gets away with portraying a thirty year old, even next to younger siblings and a thirty-seven year old John Mills, who easily passes for a nervous and uneducated young Mossop in a wonderful turn as she grow into the role of a man from a humble put upon boy. Daphne Anderson doesn’t really register as Alice but there are traces of the future Sybil Fawlty in Prunella Scales’s portrayal of Vicky.

With the varied body of work that David Lean has to his credit it is easy to see how some films might slip under the radar, but Hobson’s Choice doesn’t deserve to be one of them. Personally I enjoyed this more than the revered Brief Encounter – by gum!