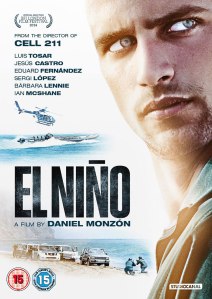 It’s been five long year since Daniel Monzón broke through on an international scale with the tense and fiery prison drama Cell 211, but he returns in a big way with this blockbuster crime thriller, that lacks the overall intensity of its predecessor but shows Hollywood doesn’t hold the monopoly on large scale action flicks.

In between the Strait of Gibraltar and Morocco, highly-strung cop Jesus (Luis Tosar) has spent years trying to crack a major drugs operation, alongside his more patient partner Eva (Barbara Lennie). When a big time bust goes wrong Jesus is demoted to chopper duty but insists on still cracking the case. His target is Rachid (Moussa Maaskri) a drug lord dealing in cocaine who employs ingenious methods to transport his wares.

The latest involves skilled jet ski driver Niño (Jesus Castro) and his fisherman friend Compi (Jesus Carroza) who prove themselves when they outrun Jesus by reaching waters outside his jurisdiction. Upon learning their cargo was fake and they were a decoy, the boys team up with Rachid’s nephew Halil (Saed Chatiby) to start their own operation dealing in hashish instead of coke. A determined Jesus decides to bring them both down.

It needs to be established straight away that El Niño (which means “the kid”) is not a bad film. As a big budget action thriller with high-end production values it delivers everything a film of the genre needs to and certainly gives us plenty of bang for our buck. What it lacks is the psychological impact of Cell 211 and the relative cultural nuances of the Spanish judicial system; this film could really have taken place in LA or Miami or even Hong Kong – which is ironic as Daniel Monzón apparently turned down an offer of US financing if he made the film in English, claiming the story only made sense in Spanish!

Essentially this is a tale of the old guard versus the young guard, with Jesus and his colleagues being outsmarted by the younger drug traffickers at every turn, but both have to deal with interference from close quarters which threaten to undermine their respective operations – Niño, Compi and Halil not only have to watch over their shoulders for the police but for Rachid too, while Eva and Jesus discovers someone within the force is leaking information to Rachid.

At the centre of this entire mission for Jesus is a mysterious figure known only as The Englishman – played by an unrecognisable and silent Ian McShane – unfortunately clad in white suit with a panama hat and shades to denote his villainous raison d’être. This isn’t the only cliché present with quite the checklist of familiar genre elements to be found here, suggesting Monzón has studied the handbook from cover to cover. But he incorporates them all slickly enough and with relevance so this is something we simply accept as a by-product of the genre conventions.

This makes the film feel all the more like Monzón is desperately trying to appeal to the US Market with its glistening sunny locations, crystal blue seas and sumptuously shot action scenes, including some breathtaking chase scenes on said seas, complete with cheesy Miami Vice soundtrack and quick edit cuts a’la Michael Bay. And with the cast being young, buff and chiselled the onus is certainly to get as many bums on seats as possible – something the months of hype in its native Spain seemed to achieve.

With a 130 minute run time Monzón unfortunately finds it hard to keep the momentum going for the duration and it becomes obvious rather quickly that long films may not be his forte. Granted the opening scene of the failed bust is superbly shot and executed and the aforementioned chase sequence is spectacular but it is 45 minutes into the film before the actual story begins to take shape. Similarly the mole angle doesn’t appear for another hour while no information at all is given about The Englishman.

The characters are largely well defined if a little lax on the history front. We see that Compi is looking for a better quality of life and way out of the mundane 9 to 5 drudgery yet we know nothing about Niño or his motives. He appears out of nowhere and seems to live for the buzz, only taking a break to woo Halil’s sister Amina (Mariam Bachir), a relationship that for the most part doesn’t appear to offer much more than some cheap titillation and again slows the tempo of the film down, but it does keep the stunning Bachir on screen so it’s a cross I’m happy to bear.

Monzón has assembled a big name cast for this big budget affair and while there are no blow away performances everyone delivers what is expected from them. Luis Tosar in a rare good guy role still brings the intensity to Jesus as the embattled cop, complimented by Barbara Lennie’s supportive Eva; interestingly there is no romance between them which is at least one cliché avoided. Also Sergi López, the antagonist in Pan’s Labyrinth, pops up as Jesus’s senior colleague.

Of the two young leads, Jesus Carroza is a charismatic and well rounded choice for Compi but unfortunately newcomer Jesus Castro as Niño is the opposite; he may win over the females with his steely blue eyes, piercing glare and chiselled features but for now that is all he has to offer. Mariam Bachir is also debuting here but makes a decent impression as Amina, showing she is potentially a good hire for more than her looks.

El Niño is everything an action thriller should be – glossy, high octane, sexy and engaging. However it is let down by Monzón not exerting his own style in his direction and the need to excise some fat. Quibbles aside however this film easily stands up against any of Hollywood’s output in this area.