A Girl At My Door (Dohee-ya) 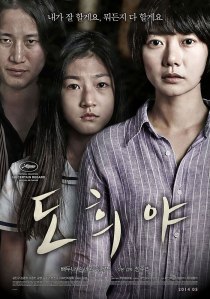 A Girl At My Door (Dohee-ya)

A female police academy instructor Lee Young-nam (Bae Doona) is relocated from Seoul to small seaside town following a personal scandal to head a small police substation. On her first day there Young-nam witnesses a group of kids bullying a young girl, Do-Hee (Kim Sae-Ron) then later that evening sees the girl being chased by her abusive step-father Yong-Ha (Song Sae-Byeok). Because he had been drinking Yong-Ha is let off with a warning but Young-nam learns that not only wasn’t this a one off, but Do-Hee’s grandmother (Kim Jin-Goo) is also violent towards the child.

The next evening a beaten Do-Hee shows up at Young-nam’s house saying she had run away from home, when a call arrives that her grandmother was found dead in the sea, having crashed her bike. With Yong-Ha distraught and drinking heavily, Young-nam takes Do-Hee into her house for protection and the pair bond. A visit from someone from Young-nam’s past is just the beginning of a series of events with dire consequences for all concerned.

Many of the elements of the plot are standard fare with familiar tropes – the drunken step-father, the caring professional with a secret, etc – but first time director July Jung does her best to create a scenario in which we are fully invested while sufficiently moved by the characters. It’s unquestionably a heavy and ambitious subject to tackle for a debut, and there is room for improvement on the scripting front, but it packs a hefty emotional punch where it counts.

Naturally all sympathies are with Do-Hee as they should be. The abuse she endures is a result of her mother leaving, which heavy drinking Yong-Ha takes out on Do-Hee with his fists; but because Yong-ha runs the town’s hugely profitable fishing business, he is afforded the “turning a blind eye” treatment whenever he steps out of line.

Young-nam is having none of it and arrests Yong-Ha on that first night, Do-Hee’s fear of her stepfather perceptible to a blind man. The inevitable relationship blossoms, falling somewhere between sisters and parental, but the change it brings out in Do-Hee is night and day. But little signs here and there – Do-Hee acting possessive, wanting to share a bath and a bed, put a question mark over Yong-Ha’s claims concerning Do-Hee’s credibility.

I’m sure what will strike the western viewer first is how the other villagers can so wilfully ignore the treatment of Do-Hee, especially when it is sometimes committed in public. Small town mentality is one thing but this was a plot contrivance that didn’t quite ring true. Young-nam’s appointment also highlights the ongoing issue of the patriarchal society of Korea, with her authority mocked or ignored by the male townsfolk purely due to her gender.

This applies also to Young-nam’s big secret – an overreaction of such archaic standards one wonders if the Korea calendar stopped in 1980! This secret is not revealed until mid way through the film and is surprisingly played down as a quick means to kick start the major crisis point for the new police chief rather than be a significant and intrinsic factor in the plot. That said, its congruence is vital to later developments so its perfunctory presence can be justified.

Similarly underdeveloped is the subplot of the illegal immigrants hired by Yong-Ha, working for slave labour wages which helps the town’s economy immensely. This was brought in out of nowhere and again feels like little more than hastily added plot point to succour the ongoing feud between Young-nam and Yong-Ha, belying not only its importance as a crime but as a potent topic for social commentary.

Despite her lack of experience behind the camera July Jung, equips herself pretty well in her first feature, although signs that she has yet to fully master time management beyond a short running time is evident. Aside from the above instances of undeveloped plot points, there is an over reliance of the repetition of Do-Hee beaten beating and arriving at Young-nam’s door all dishevelled and tearful. Elsewhere the male cops are all shown to be largely ineffective with Young-nam being the only one with any balls. I appreciate Jung may feel like she is striking a blow for feminism in Korea but balance is equally important in making a point.

Perhaps the most upsetting scene is in the final act which is uncomfortable to watch, as Jung manages to push boundaries with the merest hint of the explicit imagery the audience conjures up in its mind. Perhaps it is because the subject matter is so sensitive that we squirm and wince with unease, but within the diegesis of the plot, it is arguably a tragically fitting scenario.

The success of this film is carried squarely on the slender shoulders of its two leads. Bae Donna is debatably the queen of Korean indie films, while also crossing over to Japan and Hollywood too. This is a rare step towards mainstream for her and as ever, she is a captivating presence with her wide eyes, and emotive fragility – maybe not the ideal characteristics for a police chief but she is at least human.

Kim Sae-Ron is not even fifteen yet but is already a six year movie veteran, cementing her position as Asia best child actress with this latest sublime performance. Do-Hee is a multi-layered character as a result of her tough life and Kim essays each side of these with a rare and mature perception for a youngster, while physically transforming into various persona to fit the mood of the scene. She and Bae Donna create a believable chemistry together, crystallised in a tender bath scene.

A Girl At My Door is a bold debut for July Jung, highlighting the darker side of Korea’s misogynistic and close minded attitudes in a rather myopic but forthright tale. There are areas which Jung needs to improve on which she will with experience, but this is a competent and promising enough start.