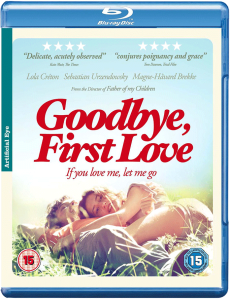 There is a scene late in this film where the two principals leave a cinema and in discussing the movie they just saw, the male complains “It’s so French! It’s talky, complacent.” It is therefore with some irony that this could be levied against this third feature film from former actress turned writer-director Mia Hansen-Løve – not so much the talky but the complacency.

As the title suggests this is a tale of that all important life changing first time experience of first love, told from the perspective of Camille (Lola Créton), who we first meet as a fifteen year-old in an intense physical relationship with conceited nineteen year-old Sullivan (Sebastian Urzendowsky). They both declare each other to be their everything in life until Sullivan announces his plans to take a ten month trip across South America with some mates. Despite Camille clearly hurting, the pair spends a final summer together at Camille’s family summer home in the woods where Sullivan promises to write every day and Camille checks off each stop on a map on her wall.

Over time the letters stop coming and Camille resigns herself to being single again. Jump forward eight years and Camille is now an architect, living with her much older professor Lorenz (Magne-Håvard Brekke) and with whom she suffered a miscarriage. Then Camille learns that Sullivan is back in France and after an awkward first reunion old feelings begin to resurface.

Goodbye First Love is said to be autobiographical in places, with the obvious references to Hansen-Løve’s real life May-to-December relationship with director Olivier Assayas, for whom she first acted before finding her calling behind the camera. If the rest of Camille and Sullivan’s story mirrors Hansen-Løve’s then how much is for her to know and us to find out.

So, exactly how is this film “complacent” as per my above comment? This would be due to its strolling pace and absence of any real drama and definitive plot. And it is “so French” by filing up this near two hour run time with quotidian and mundane happenings which easily could have been excised. Then again the film’s mise-e-scene is a fairly naturalistic and no frills (albeit glossily shot) affair presumably designed to make this an inclusive experience for the viewer so again, this is a by product of that approach we’ll have to endure.

Hansen-Løve defines the strength of the love of our besotted teens immediately as well showing the differences between their attitudes, Sullivan being the capricious one whose commitment is questionable as opposed to Camille’s wanton desire. During their summer Camille pouts and argues a lot, victoriously demanding Sullivan to reaffirm his undying feelings for her. Yet when he pops out for some food and comes back hours later Camille is thrust back into stroppy mode.

Even after the letters stop arriving and Camille concedes to call time on their relationship she remains a frosty and distant character with whom it is hard to sympathise. The nuances that made her radiant like a modern day Juliet are gone and she seems destined to be the same sour faced young lady for the rest of her life. This is no exaggeration – one thing Hansen-Løve didn’t do was have her leads age as the time passes; aside from a few scenes where Camille sports a short pixie haircut she looks the same at 23 as she did at 15, as does Sullivan when he returns in the second half. This gives the impression that maybe they haven’t really grown in their time apart after all.

Unlike Sullivan though Camille has moved on with her life but similar patterns in her behaviour emerge during her relationship with Lorenz. She is unconcerned with the age gap but doesn’t seem as committed as she should be, and frankly neither does Lorenz. Sullivan returning merely serves as a catalyst for Camille to put her love life into perspective. Ironically it is Sullivan who is the voice of reason in reminding Camille where her loyalty should lie, short of forcing her to change her Facebook status to “It’s Complicated”.

What is a nice change is that when the couple meet up again there is no contrivance in the spark between them returning, such as a moment of reminiscence to bring the old feelings flooding back or an innocent mnemonic or keepsake that sees the pair abandoning their current lives to reclaim their past loves. Instead it is an organic reheating of something that never got cold and Hansen-Løve teases us by playing this hand with her cards close to her chest.

While production values are modest and free from unnecessary artifice the photography is stunning, delighting us with glorious shots of the French countryside under the majesty of the summer sun while painting a poetic tableau of Paris in the wintertime as snow covers the capital. The musical soundtrack is minimal but the songs are suitably simple jaunty numbers to match the moods of the scenes.

Despite the story ending up as a rather laconic love triangle the driving force behind it is Lola Créton, the one constant throughout – which unfortunately is something of a backhanded compliment. As a fifteen year-old she convinces us admirably of Camille as a girl in love and how true it is for her; as an adult she barely seems to have changed leaving her portrayal to feel one dimensional. Sebastian Urzendowsky also appears to suffer from the same problem while Magne-Håvard Brekke barely registers as Lorenz – yet they all prove to be the best choices for their respective roles.

I’m sure there are many who have experienced the same thing Camille and Sullivan in their lives so this film will speak them on a deeper level than it did me. As a viewing experience Goodbye First Love is a nicely shot and well intended project but one I doubt I’ll be pining for in eight years time!