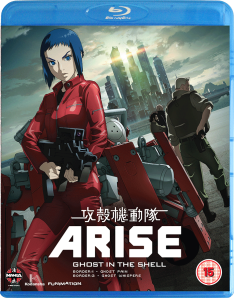 Mamoru Oshii’s 1995 film Ghost In The Shell is pretty much a rite of passage for anyone sampling anime for the first time. As one of the Big Three (with Akira and Ninja Scroll) to break anime in the west in a major way, the importance of this cyberpunk classic is not to be underestimated – for starters, it’s a recognised influence the popular Hollywood film trilogy The Matrix!

Beginning with two theatrical films, followed by Kenji Kamiyama’s spin off TV series Stand Alone Complex and its side-story film Solid State Society, the GITS universe is extended once again by this four part mini-film series ARISE. Scripted by Tow Ubukata of Mardock Scramble fame ARISE is a prequel depicting the events from a time period before the first film when the Section 9 team we all know and love doesn’t even exist yet.

This release contains the first two episodes labelled “Borders” and reveals the circumstances under which the Section 9 came together, which will surprise many long time fans. The first instalment, entitled Ghost Pain, is set in the year 2027 and Daisuke Aramaki of the newly formed Public Security Section 9 is investigating the suspicious death of a military commander of the secret group Unit 501, set up to explore cyborg combat, suspected of being part of a wider conspiracy. Conducting her own investigation on behalf of the Unit is Motoko Kusanagi, a talented young soldier and cyber hacker recently converted into a full cyborg by the Unit. As both collide during their respective investigations an even bigger mystery is uncovered and a reluctant union is formed, but Motoko finds it hard to trust anyone, even those she thought were on her side.

Straight away long time aficionados of GITS will notice not just the new character designs (more on this later) but the new backstory for the soon-to be Major Motoko Kusanagi sees some liberties taken, clashing with what we learned in the Stand Alone Complex series. The characterisation of Motoko is noticeably more human than we’ve seen her in previous incarnations, performing rare acts such as smiling and reacting to pain on an emotional level.

The titular Ghost Pain referring to the fragments of Motoko’s memories which are tampered with during the course of the investigation to put her in the frame for her superior’s murder, something believed to be the case for one Batou, who unlike in the later stories is an adversary for the major and not her right hand man. While Ishikawa is a former army intelligence officer here, Togusa is a regular police detective working on a case which he thinks is linked to Motoko’s investigation.

While the timeline moves forward each Border is a self-contained story meaning they are concluded inside a 56 minute run time. This leaves little room for the plots to fully develop beyond being a suitably functional backdrop for this history to unfold over. An additional 25 or 30 minutes would have been a huge benefit to make the stories feel a little more substantial.

In Border:2, Ghost Whispers, the Major has left unit 501 and is now freelance investigator along with her Logicoma (a forerunner to the much loved Tachicoma) working alongside Aramaki, investigating a man receiving false memories concerning a refugee transport mission, while Logicomas are being hacked by a malevolent force. The central conceit here is the key members of Section 9 again on opposite sides, with Batou and the Major both trying to recruit the likes of sniper Saito through bribes!

While heavy on action and plenty of cyberpunk tech talk – the second episode even briefly enters into trippy territory of the Innocence film – one element missing which is integral to the GITS oeuvre is the philosophical musing about humanity vs technology. With the Major being practically all cyborg courtesy of the military, she is not really her own woman yet she is allowed to live and operate autonomously – within reason of course. Little is made of the potential overruling of her body by the military while a rogue Artificial Intelligence is trying its best to infiltrate cyber networks as well, a central them of previous GITS adventures.

Production IG once again takes up the animation reins as they have done before and the result is arguably the best looking visual presentation of GITS thus far. Gorgeous background designs, superbly detailed artwork and fluid animation delight the eyes, especially in HD, while possess a subtle nod to the original cell drawn style of the first film, creating a mix between Oshii’s vision and Kamiyama’s vision. Unfortunately the Yoko Kanno is not involved with the music so the soundtrack from Cornelius, while perfectly fine, doesn’t leap out as with pervious GITS outings.

I mentioned the character designs earlier which will be the biggest talking point for long time fans. First, as the story is set prior to the other shows the characters are younger, most notably the dark haired and less craggy looking Aramaki. The other major (pardon the pun) change is with Motoko. She is not only slimmer and more girly but she now sports blue hair which is short at the back, badly cropped at the front with long floppy sides! Her demeanour is also softer but she is still headstrong and kicks butt with determined force. The voice cast is also new as well, which may take some getting used to for devoted viewers.

It somehow feels like blasphemy to say anything against Ghost In The Shell so it is with relief I say that, despite the limitations imposed of the one hour format and the rushed scripts, ARISE is still a worthwhile addition to the franchise. It has two more Borders to fully win us over but the bold step in creating a new history for such beloved and iconic characters is a strong enough hook for anyone who calls themselves a fan to invest in this latest instalment.

Ghost In The Shell: Arise At Anime Expo 2013

News Flash Type A & B

Surface X Ghost In The Shell Arise Another Mission