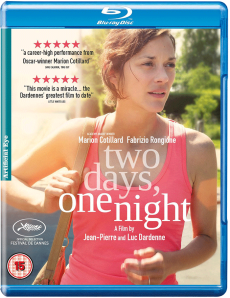 When does self-preservation become selfishness? Why should doing something which will benefit you and your loved ones at the expense of someone else’s livelihood be such a moral quandary?

When young mother Sandra (Marion Cotillard) is about to return to work after a break due to illness, she is shocked to learn that a vote among her colleagues in her absence saw them agree to healthy bonus in exchange for her dismissal. With only her friend Juliette (Catherine Salée) on her side, Sandra persuades her boss Dumont (Baptiste Sornin) to hold a second vote on the Monday, giving Sandra the weekend to talk to the others and convince them to change their vote.

The celebrated Dardenne Brothers Luc & Jean-Pierre (who gave us the whimsical The Kid With The Bike) turn their socially curious attention to the subject of loyalty in the workplace and how it could easily be bought for the right price. That is a somewhat glib summary of the film’s central theme but for some of the cast it does essentially come down to that.

With times already hard the promise of an extra €1000 in their next pay packet is a godsend for many, if not all, of the sixteen co-workers at Sandra’s small place of employ. In her absence Dumont saw that the workload could be done by sixteen instead of seventeen people so losing the sick one wouldn’t make a difference and would make the bonus a reality.

As Sandra discovers while some of her colleagues are very sympathetic and refuse to see her go under these circumstances others are sympathetic but are just as desperate to have the extra money. Then there are the ones who aggressively resent Sandra asking them to give up their bonus, fuelled by the pot stirring of foreman Jean-Marc (Olivier Gourmet), who corrupted the vote by telling everyone either Sandra went or they did.

Quite a simple but morally sticky situation in which there are appears to be a number of victims who stand to lose out one way or the other although there is no real villain except maybe circumstance – although a good case can be made for both Dumont and Jean-Marc deserving the finger to be pointed in their direction. What the Dardenne’s have done is to exploit the perfectly natural human reactions in a non-didactic way within a scenario which has no right or wrong response, only questionable ethics in the rational behind them; as one co-worker told Sandra “I didn’t vote against you, I voted for my bonus.”

It is a tale of one person’s misery which can be overturned by the kindness of others which proves to be an uphill struggle because of – and here’s that word again – circumstance. Some co-workers literally need the bonus to pay off bills, tuition fees or help towards the raising of the new born babies while one younger chap just wants the money. Sandra soon learns who her true friends are when those she thought were friends refuse to even see her.

Conversely the importance of Sandra keeping her job is seemingly ignored by the effect the €1000 bonus will have, even though it won’t come close to how much Sandra’s household stands to lose. To add to her woes, Sandra is recovering from depression and relies too much on pills to over come the stress of her plight. Her husband Manu (Fabrizio Rongione) is very supportive and drives Sandra everywhere but also is helpless in keeping his wife mentally stable.

If the Dardennes have struck any kind of nerve with the audience it is how we find ourselves asking the question “Would would I do in this situation?” and I am sure the answer would be different once both sides of the argument have been presented to us. As suggested earlier we do not feel as thought our feelings have been manipulated or that we’ve been drawn automatically to Sandra’s side just because the story posits her as the nominal protagonist.

There is naturally a sense of repetition in Sandra’s doorstep quest to save her job and her subsequent rise and fall in confidence after each meeting which will cerate a sense of ennui for some viewers. But it is a necessary evil to tell the tale at hand and it hits home the stark realities of trying to encourage people to make a personal sacrifice on her behalf. To that end one at least can empathise and admire Sandra’s tenacity.

Equal amazement and disgust at the attitudes of the dissenting co-workers and by association their partners will be felt although, as discussed, their reasons are perfectly valid. It’s an interesting situation to have an entire cast which is painted grey and all relatable even if our moral compass is pointing in a different direction to theirs.

The filming style is true to the Dardennes’ previous works – low key, intimate, musical soundtrack free and very natural, evocative of a world identifiable and recognisable to the audience outside of the film’s Belgian setting. Part of its power comes from how this could happen in any country around the world and paints a universally bleak picture as seen through an incisive and trenchant eye.

Carrying the entire film on her slender shoulders is the always dependable Marion Cotillard who once again delivers a compelling performance of startling depth, fragility, strain and despair. With a string of superb performances already to her name one has to wonder what sort of places Cotillard has inside her into which she delves to find the right emotional qualities to draw on for her performances. Whatever they are I hope they stay open for a long time.

For some people Two Days, One Night will be all about Cotillard’s latest stellar performance but I hope most will see the true power in what is a simple but pertinent and deeply affecting story which begat this performance.