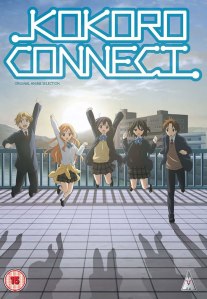 Normally when an OVA collection from an established series arrives the content tends to be formed of standalone adventures featuring the main cast, often stepping outside the usual boundaries of the main plotlines for some extraneous fun. It is something of a precedent then that this four episode “OVA” release actually concludes the story which began in the main Kokoro Connect series.

In this instance “OVA” is a somewhat spurious use of the term since these episodes continue the numerical order of the series, delivering episodes 14-17, and a very much canon rather than a bonus cash-in, but there is a darker story behind this which we shall get to later on.

To the main topic and when we left our five psychological guinea pigs who make up the Student Cultural Research Club – Taichi Yaegashi, Iori Nagase, Himeko Inaba, Yui Kiriyama and Yoshifumi Aoki – they had found their relationships had been strained by the manipulation and games by the mysterious ESP power of Heartseed, who continues to possess the body of their teacher Mr. Goto.

Inaba finds herself distanced from the others in the group, not in the least that her two fellow females Iori and Yui have stolen the hearts of the males Taichi and Aoki respectively. Inaba has taken all of the various trials and tribulations Heartseed very personally and is struggling to reconcile her own identity in lieu of the personal revelations she shared and how the body swap issues affected her.

In this concluding arc Heartseed’s latest stunt is to make the thoughts of the group audible to the others which cause all the expected problems such ability would incur. As if almost by design Inaba finds herself distancing further from the others when he thoughts are read by the group eventually learn to use this skill as a form of tacit communication.

This becomes very handy for the subplot which involves the group having to compete against the Jazz Club for the exclusive presence of their club advisor Mr. Goto. The club room is destroyed along with the hard work the group had put into their presentation. The key suspect is a snooty female classmate Kaoru Setouchi, who is angry at Iori for turning down a boy she fancies in the Jazz Club and decides to get revenge.

If you enjoyed the main series then you will be pleased to know that these episodes don’t miss a beat and provide suitable conclusion, which should be of some relief to anyone who found the end of episode 13 somewhat anti-climactic. Like the previous release a lot of soul searching and verbal jousting is the order of the day as once again our beleaguered quintet is put through the emotional wringer.

Unfortunately Heartseed’s motives for his actions and why he picked on these particular kids is never revealed which is somewhat frustrating, unless it was divulged in the manga, but for us anime viewers, no such luck. We can only assume that this is someone with some deep psychological questions who devised a unique if unorthodox method to explore these fancies in a practical fashion, or perhaps he/she spotted something hidden within these kids that needed brought out into the open.

Because of the heavy existentialist nature of the concept and the issues that are raised, the dialogue is not only prominent over the action but is rather verbose and a little intellectually beyond the ages of the young protagonists. We know Asian children can be a tad precocious but the way this lot rattle off their insightful Freudian analysis just feels a slight reach beyond the age group they are supposed to be representing. It’s a minor quibble since the characters eventually revert to your typical whiney teens when a particular savage blow is dealt.

While the ending is fairly conclusive there is a sense that the door has been left ajar for a second series. Unfortunately that isn’t going to happen which brings us back to the “dark story” I mentioned earlier. The high hopes for this series were dashed by the embarrassing backfiring of a prank.

At an advanced screening of the show Silver Link, the team behind it, brought in a voice actor named Mitsuhiro Ichiki and invited him to audition for a role on the show and be announced as a surprise new cast member. However it turned out Ichiki was in fact going to be given the role as Head of Public Relations and his audition was being filmed for a Candid Camera style prank.

Angry anime fans bombarded the Twitter and social media accounts of staff and cast members alike who were involved with angry comments and abuse, many vowing to boycott the show. While a hasty apology was issued and Ichiki declared no hard feelings, the reputation of both Silver Link and the show took a huge hit. The plan was always to have the four remaining episodes be for retail release only but with the scandal refusing to die down it seemed that this wouldn’t be enough to appease the angry fans and the DVD/Blu-ray pre-order numbers reflected this.

As a result all side projects were abandoned and the release of the final episodes did indeed represent closure for the entire franchise. A shame as the concept had enough scope to warrant a second run since the light novels and the manga are still alive but ultimately the damage is done.

It’s unfortunate to end this review on a sour note but the good news is that this concluding release of the Kokoro Connect tale is as enjoyable as the main series and provides a satisfying end to one of the more interesting titles of the year.