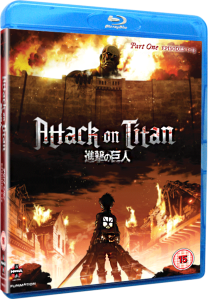 Over the past few years anime fans have had to endure a proliferation of stereotypical fan service harem comedies and shameless mecha rip offs with shows with fresh ideas and strongly developed storylines at a premium. So it is with some overdue relief that the faith of those waiting for something atypical of the current trends is rewarded when a new title arrives to rock the fandom to its core and rises above the conventions to be the next big thing. That title in question is Attack On Titan.

Set in an alternate history timeline humanity has almost been wiped out by giant humanoid beasts with a insatiable hunger for human flesh known as Titans, forcing mankind to retreat behind walled cities. With three levels of fortification with high scale walls to repel the gigantic intruders, the remain human live peacefully for a hundred year until out of nowhere an even larger breed of Titan, some standing over 60 meters in height, appears and lays waste to the outer city, once again causing the remaining inhabitants to flee towards the inner cities for safety.

One of the casualties of this raid was the family of young Eren Yeager, who along with his foster sister Mikasa Ackerman, witnesses his parents being killed by a Titan. His heart full of rage, Eren vows to join the Scout Regiment and destroy the Titans and a few years later he gets his wish, recruiting alongside Mikasa and their long time friend Armen Arlett.

And there we leave the plot summary as Attack On Titan is a series that refuses to sit still and the progress of the story hurtles along even in this first instalment of thirteen episodes. But don’t mistake this as being a piece of fluff – the writing is tight and the characters are given a chance to develop and grow even with the time skips. Based on the original manga from Hajime Isayama, the story hits the ground running given us an – albeit brief – first glimpse of the Colossal Titan barely minutes into the first episode with the deadly rampage to close the chapter leaving us little time to catch our breath.

The alternate historical setting allows for some Steampunk attributes to be employed in depicting the defence campaign by the Scouts. Having discovered that the Achilles heel of the Titans is the nape at the back of the neck, a transport defence–cum-weapon called the Omni-Directional Mobile (ODM), a belt system which has a small gas fuelled jet pack with cables that eject from it and affix themselves to walls and other solid surfaces, allowing the scouts to travel through the air a’la Spider-Man.

They are armed with two razor sharp blades to cut the Titan’s tough skin and while this doesn’t stop the blood thirsty giants, it cause enough damage to distract them from being attacked from behind to score the fatal blow to the neck. This isn’t a completely foolproof plan as numerous casualties are incurred due to the obvious size difference but the humans refuse to give up without a fight.

Assuming directorial duties is Tetsurō Araki, whose last show was the gore filled High School Of The Dead which demonstrated his horror credentials while his most well known work, the sublime psychological thriller Death Note sets him up to handle the dramatic element of the story. And indeed this is a multi-layered story which encompasses much more than blood and guts.

When the cast are not fighting for their lives and on behalf of the civilians, they take a moment to reflect on the human cost of their endeavours and many of the characters are both physically and emotionally shaken by the carnage they witness or participate in. From Armen freezing in fear when confronted by a Titan to others copiously vomiting at their own aggression Araki creates world where the tension, fears and apprehensions of the human cast are clearly felt and shared by the audience. And while the pace is fairly brisk, internal monologues and in depth flashbacks flesh out the characters personalities whilst allowing them develop without compromising the flow of the story.

One area where this show deserves praise is eschewing the lazy cookie cutter role of the weak sex symbol female, instead featuring a group of tough, empowered and gutsy ladies who can mix it up on a par with or, in the case of Mikasa, better than the men. With Eren as her motivation Misaka was the standout trainee at cadet camp on every level while the insular Annie wasn’t far behind. Providing some levity is “Potato Girl” Sasha who is not beyond kicking some gargantuan butt when necessary.

With the animation handled by Production IG’s spin off group Wit Studio, the budget has clearly been designated for the action scenes which are simply exhilarating to watch as the Scouts fly through the air, sometimes switching to a POV shot, slicing and dicing at the clumsy yet dangerous Titans. Because of this the reliance on static shots is quite heavy and the characters rarely display any facial movement, but in actual fact it adds something to the charm of the show, similar to the original Berserk TV show.

There is so much to say about Attack On Titan but so little space to say it. Sure it will have its detractors who will nit pick over certain things but for this writer it is the freshest and most important new anime to arrive since the aforementioned Death Note, and I make no apologies for bowing to the inevitable with my ratings.

For those who have tired of the usual cliché ridden shows and have been waiting for something of greater substance and nourishment, your prayers have been answered. Attack On Titan is an intense, horrific yet intelligent and emotionally driven thrill ride like no other.

Making Of Attack On Titan

8 thoughts on “Attack On Titan Part 1”