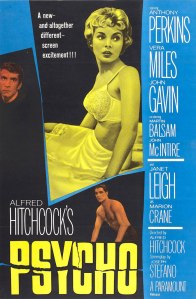 This is arguably Hitch’s most famous film but for the benefit of anyone who has yet to experience this classic chiller, the plot is as follows: Marion Crane (Janet Leigh) is having an affair with Sam Loomis (John Gavin) who is straddled with huge debts meaning they can’t afford to get married. When Marion’s boss George Lowery (Vaughn Taylor) entrusts her with $40,000 in cash to take the bank, Marion instead flees with the money. Along the way the weather turns bad so Marion pulls in at the Bates Motel, which is empty aside the proprietor Norman Bates (Anthony Perkins) and his controlling mother.

Yes it’s the one with THAT famous shower scene and equally famous musical accompaniment that everyone knows and immediately associates with impending horror. It’s a minor stroke of genius that will eclipse the actual film itself in the minds of many which has more than its fair share of other classic moments to solidify its reputation as a top notch mystery thriller.

Based on the novel by Robert Bloch, who in turn was inspired by the real life murders of Ed Gein, Psycho bears many of Hitchcock’s trademark touches, innovative filming techniques and masterful handling of misdirection to turn what begins a simple story of desperate misappropriation of funds in the name of love into a nerve shredding and briefly violent horror flick which has since been replicated but never duplicated (the best forgotten 1998 shot for shot remake notwithstanding).

The film starts of innocently enough (sort of) with a half undressed Marion and Sam bemoaning their lack of finances and shameful sneaking around due to his “complicated” martial status. The $40,000 literally falls into Marion’s hands courtesy of rich southern gentleman Tom Cassidy (Frank Albertson), a client of the estate agency Marion works at who doesn’t believe in cheques or credit. Without any discussion with Sam, Marion takes off with a packed suitcase and the money, presumably planning on going solo. By the time the weekend was over Marion’s disappearance had not only caught the attention of her worried lover but also her sister Lila (Vera Miles), while the stolen money was a point of interest to private detective Milton Arbogast (Martin Balsam).

While the audience sees what happens to Marion, Arbogast, Sam and Lila try to find this out for themselves, but as ever Hitchcock makes sure that we only get to see half the story thus we have a reason to stick around. Obviously by now the big twist is as well known as the previously mentioned shower scene but it is still nonetheless shocking. I won’t spoil it here but it once again it is something that has gone on to become a staple in the horror almanac of plot twist and surprises. But it happened here first.

If one can place themselves in the seat of a first time viewer in 1960 then overlooking how many clichés present – the pouring rain to put the victim in harms way, the voices swimming in Marion’s guilty head, the ominous music to build suspense – helps a lot in appreciating this film. That said, with Hitchcock it was always as much in the small things as it was the major ones. For instance, Norman’s hobby of taxidermy, with his handiwork placed all around the motel creates an unsettling enough atmosphere even for the most hardened bird fancier. Can you imagine trying to sleep with a stuffed crow hovering over your bed?

Prior to meeting Mr. Bates there is the small matter of Marion getting out of town successfully with the money, which is jeopardised when she falls asleep at the side of the road in her car and a suspicious cop (Mort Mills) pops over for a chat. After a tense exchange in which Marion fails to appease the cop’s curiosity, she heads off to car dealer to change car with PC Plod watching from across the road. Again, it’s all simple stuff but Hitchcock manages to make this edge of your seat viewing, leaving just enough unanswered to wonder if it will comeback to haunt Marion, which is why her subsequent demise is all the more effective.

Psycho is a film of two halves driven by the two central performances. Janet Leigh carries the first half while Anthony Perkins steers the second. Young, blonde and often undressed Leigh is Hitchcock’s archetype leading lady, which must have devastated him to kill her off but thankfully look-a-like Vera Miles was on hand to satiate this peccadillo of his for the remainder of the film. Despite having only 45 minute screen time, Leigh is barely away from our gaze and packs a lot into that time, essaying the transition from lovelorn woman to thief on the run. With lingering close-ups, especially when driving, it is through subtle facial expression that we feel Marion’s internal guilt struggling to take over her conscience.

Her scenes with Perkins where the nervy but amiable Bates asks innocently probing questions are a quiet study of a fly being unwittingly caught in the spider’s web. Perkins plays Bates with the right amount of ambiguity to fool everyone into thinking he is a lonely, shy motel owner happy to have company other than his mother. Like Marion, Bates is a character who undergoes a personality change and pushes the actor to keep all aspects of the man behind them intact while portraying these changes. After a few years in the business, it is easy to see how this role was the one that put Perkins on the map and while he bemoaned the everlasting association between his and Bates, the role was and always will be his.

Despite being copied, lampooned and ripped off ad infinitum, Psycho remains a startling fresh and effective drama-cum-horror to this day, some fifty plus years after its debut. Made on a small budget yet Hitchcock’s highest grossing film, its influence and seminal status is assured for years to come.

One thought on “Psycho”