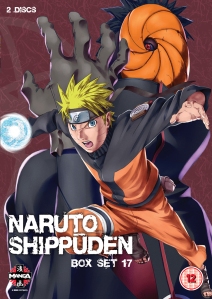 Usually when we pick up a continuing story I ask you to “cast your mind back” but there is no need as this latest volume of Naruto Shippuden does this for us! If you are a fan of flashbacks then this is the release for you!

We left the saga in the middle of the Five Kage Summit held in the Land Of Iron, which was disrupted by the very cause for this crisis meeting – the renegade group Akitsuki. But while the various representatives of the many clans bicker amongst themselves when they’re not battling against the deadly invaders, the most pressing matter for the fans will be the resolution of the cliffhanger which closed the last volume – Sakura confessing her love for Naruto!

It’s been a long time coming and loyal followers will know that while our eponymous hero holds a torch for the pink haired medic, the feeling has never been reciprocated with her heart belonging to their estranged team mate Sasuke. Remember the flashbacks I mentioned earlier? They come in abundance during this scenario as Naruto is forced to rebuff Sakura’s confession knowing full well for whom she has romantic aspirations. As it transpires Naruto was right to be cynical as he learns that the decree for Sasuke’s execution remains unchanged and the Leaf Village have taken it upon themselves to honour this. However to spare his strong feelings and dogged determination to bring Sasuke back home it was decided that Naruto be excluded from this plan, hence Sakura’s attempt to distract him. He may be headstrong, reckless and capricious but one thing Naruto isn’t is dumb and he certainly can smell out a fake when confronted by one.

Unfortunately the learns the truth of Sasuke’s fate and passes out from the anxiety which conveniently takes him out of the picture while the battle rages between Sasuke, the Leaf Village and other clan representatives. First to feel the wrath of Sasuke and faceless ninja Madara is Danzo Shimura, the criminal who yearns to be the interim Hokage of the Leaf Village. A particularly draining and vicious clash all three combatants make extreme sacrifices in the name of victory with unexpected results. Meanwhile the Akitsuki continue in their quest to collect the tailed beasts, setting their sights on number eight Bee as a veritable Battle Royale ensues, but as some of the participants are quick to discover, their own confidence can be a key to their opponent’s victory.

It wouldn’t be Naruto without the protracted multi-episode fights, so we are well served here courtesy of Akitsuki and Sasuke’s Team Hebi. The introduction in this arc of new character means new jutsus and bespoke battle techniques are employed to freshen up these collisions which is a bonus; the downside is that many of the new comers are relegated to minor onlooker roles thus we barely get to scratch the surface of their various powers, which often help reveal more to their personalities. As it stands, it is only really Danzo who gets to benefit from this exposure but it appears this arc isn’t quite over yet, so perhaps the others will get their chance later on.

The other development in the story revolves around the age old traits of betrayal and deception. Naruto is kept in the dark about his comrades’ orders for fear of his emotional state although Sakura’s subterfuge failed to work. With the Sasuke issue pressing deeper Sakura is once again forced to perpetrate another ruse but will this person be as astute as Naruto or will they fall for her words instead? Meanwhile it seems that no-one can be trusted with dissension forming among the ranks of the enemy quarters, not in the least due to Sasuke drifting from the Akitsuki game plan to fulfil his own objectives. Again moments of reminiscence take over the narrative (some scenarios are even repeated) to both remind Sasuke of his good times and reinforce his opposition and grudge against the Leaf Village.

Having just come off a season of filler material set in the past it seems a little too soon to be incorporating this format again amidst what is a fairly solid new storyline. Granted these trips down memory lane don’t dominate the entire set of episodes on offer here but their presence is distracting enough when affair few clips are not just identical to what was featured in the aforementioned filler arc but also the same old moments from Naruto’s past we’ve seen revisited before on numerous occasions. This is not to say they don’t have a relevance to the overall plot but with so much of this already well established within the Naruto history, it could just as easily have been referred to without the distraction of seeing it again.

I’m genuinely running out of things to say in summary of each new Naruto release. Occasionally a few surprise are thrown up which encourage deeper discussion of these developments but these are rare occurrences. While the story takes an interesting turn towards the end of this set (withheld for spoiler reasons) this is pretty much your average new instalment from this long running franchise. There’s little that will win over new fans while the die-hards will little to complain about.

See you next time for more of the same!