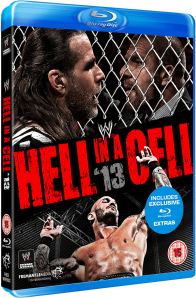 Once upon a time the Hell In A Cell was the most feared of the cage structures featured in the WWE, often used a last resort measure to end the most personal and aggressive of feuds in what would be the violent final stand off between fierce adversaries. Unfortunately this gimmick was soon overplayed and lost its lustre and when the PG era of the WWE was ushered in back in 2009, this once satanic structure was given its own PPV show and the saturation of its presence rendering it just another match was now complete.

Cynical? Perhaps but with this PPV being the second of the three to run inside seven weeks the WWE were pushing their luck somewhat, especially coming off a poor show in Battleground which had an abysmal finish to the main event, again encouraging paying customers in the US to demand refunds.

This year the show took place at the American Airline Arena, Miami, Florida where 9000 fans showed up to see if we would finally have a decisive winner in the Orton vs Bryan feud and crown a new WWE Champion. With Shawn Michaels as guest referee and the match being held inside the titular giant cage, what could possibly go wrong?

Our announcers as always are Michael Cole, Jerry “The King” Lawler and JBL and as ever, while I won’t spoil the match outcomes, I will have something to say about everything else.

The Rhodes Boys not only defeated The Shield at Battleground to earn their jobs but two weeks later won the tag tiles from the Hounds Of Justice (see the Blu-ray extras). With the Usos having earned a title shot before this switch this rematch became a triple threat. After a slow start this turned into a fast paced and solidly worked affair with a great final stretch. Shame the show went downhill from here. It has to be said that the rebirth of Dustin “Goldust” Rhodes in 2013 has been nothing short of phenomenal, out working most of the youngsters on the current roster.

The Miz Calls Out Bray Wyatt

After being captured and beaten up by the Wyatt’s Miz decides to take up PPV air time to call out the spooky family for a bit of revenge but gets his smarmy backside handed to him instead. Help comes in a familiar form but the results aren’t quite what Miz expected. Why this wasn’t saved for RAW I don’t know. Oh and that infamous bodyslam botch has been cut out! Boo!

A bonus match and I believe Summer Rae’s in ring debut for WWE. This is one of those ultra rare occasions where the Divas are the best workers in the ring; even more frightening when one of the men is a former World Champion! While she needs a bit more polish on her ring skills Summer has the heel mannerisms and ring presence down already. The less said about the men the better.

Originally the freshly turned Langston (literally out of nowhere on the SD prior to this show) was to face Curtis Axel for the IC title on the pre-show, but a hip injury to Axel forced this change. Basic but hardhitting filler match that is memorable only for both men clashing heads in one spot and busting each other open.

Hard to believe but a year earlier this match was the main event and for the WWE Title! Strictly speaking that was a one-one-one match but with Heyman spending the entire match on the roof of the cell essentially so was this. Sadly without the high stakes intrigue of the former match this one bombed. Too long and a rather dull ending to the Punk vs Heyman feud.

Los Matadores vs. The Real Americans

Another filler match featuring the former Epico & Primo pretending to be Spanish bullfighters against a team who deserve better. At least we know it isn’t Rey Mysterio in the El Torito bull suit as he was on commentary with the Spanish announce team!

Miraculous recovery aside, Cena got this title shot because….well he’s John Cena and gets everything handed to him for no reason. Literally, despite being out since Summerslam with an injury, Vickie Guerrero came out on RAW and announced Del Rio would defend his title against Cena – just like that. And they wonder why everyone boos him! You know how this one goes even if I could be bothered to recap it.

Another solid outing for the Divas thanks to the mercurial AJ Lee and presumably Daniel Bryan, who we can assume has been showing fiancé Brie a few tricks, yielding some marked improvement. Despite being the second shortest match on the show it is all action and far from being the worst, and the crowd cared too! Pointless trivia note: the ref here is former TNA ref Rudy Charles.

After Big Show caused the match at Battleground to end in a no-contest and push the WWE fans closer to walking away, this matter would be settled inside the Cell with HBK as ref, as shockingly voted for by the fans on RAW. Yes that was sarcasm as Stevie Wonder could see how this was going to play out the moment his name was on the ballot. And yes, he would have been right too. Technically a solid affair but once again the predictably overbooked finish marred it from being totally satisfying.

If the fall out from Night Of Champions was the first warning sign that the wheels were about to come off the WWE locomotive and Battleground was the actual crash then Hell In A Cell was the wreckage finally skidding to a halt. Vince “We listen to the fans” McMahon doesn’t see anything in Daniel Bryan and spent the whole summer trying to convince the fans they are wrong to cheer for him and make him the next breakout star to carry the company forward. They refused and continued to support Bryan after every screw job thrown his way. This match was the pretty much the final nail in the coffin for Bryan’s main event push and order has once again been restored to suit Vince’s own tastes with no regard for what the fans want whatsoever.

Most of the advertised matches here weren’t likely to engender much interest anyway and the last minute bonus matches certainly didn’t help the cause. When the Divas provide more entertaining matches on the show than the so called top tier male stars you know there is something wrong.

Best Match – Cody Rhodes & Goldust vs The Shield vs The Usos

CM Punk Reflects on Hell in a Cell

Exclusive First Interview with John Cena since Returning From Injury