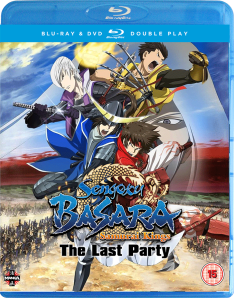 If you’ve not seen the two TV series of Sengoku Basara that you will be at a disadvantage heading into this film, which is in fact the conclusion of the story, rather than a standalone spin-off. While it opens with a brief recap of events to get you up to speed, this is only minimally sufficient in helping follow the story and action presented here.

We join the saga almost immediately after the defeat of the warlord Toyotomi Hideyoshi, and it seems that any rejoicing for peace being returned to the Warring States era in Japan is premature as Hideyoshi’s loyal vassal Mitsunari Ishida is just a tad miffed at the falling of his master and is hell bent on revenge. Unfortunately for the “One-Eyed Dragon” Date Masamune, he is the target of Ishida’s fury.

That may appear to be a rather flimsy plot for a film but as explained above this outing is essentially the pay off from the TV series and thus the bulk of the story has previously been established and built up. Therefore what we have here is something that feels more like an extended episode of the series rather than a special feature length addition to the saga. It’s the icing on the already filling cake of testosterone fuelled, history distorting, Steampunk mayhem. Of course without the rest of the actual cake to feast on the icing alone can be too sweet for the pallet and not as satisfying, even with the addition of small pieces of fruit, jellied figures, chocolate flakes or any other edible decorations. As oblique as this food analogy maybe it pretty much sums up The Last Party.

Don’t mistake that as a criticism, it is more of an observation. The drawback of continuing – and in this case – concluded an existing story arc is apparent from the onset and hinders any form of character development and additional depth to the story. All of the key players from the two TV series naturally feature prominently here – Masamune, Sanada Yukimura, Ieyasu Tokugawa, Keiji Maeda – while other familiar faces are relegated to fleeting appearances, notably Shingen Takada and Kenshin Uesugi. One face long forgotten from the very start of the saga makes a return that should have been seen as a prescient one for the shocking turn leading into the finale.

After some reminders of where our leads stand on the topics of the peace, prosperity and leadership of the land – for Yukimura this comes in between more homoerotic displays of bonding with Takada by beating the hell of out of each other – it seems Tokugawa is intent on encouraging a coalition between the varying factions to bring and end to the fighting and restoration to the country. Response is lukewarm but that isn’t the fault of Tokugawa as someone is trying to sabotage his plan which makes Ishida’s cutting a swathe through the forces of the land to get to Masamune and anyone who stands in his way, en route to what becomes the famous Battle of Sekigahara.

With its origins in a CAPCOM video game the lack of fidelity to historical accuracy and the incredulous physics defying fight scenes are not only to be expected but, by now, an accepted aspect of the Sengoku Basara franchise. Of course it is these esoteric and anachronistic excesses that make Sengoku Basara what it is and extends its appeal beyond being a historical retelling that, with respect, is a more successful venture in the live action medium. Anime could do it but part of its attraction to fans is its willingness to step outside the boundaries of conventions and deliver something we wouldn’t otherwise see with a certain genre. So if gravity defying punch-ups with outlandish weapons and accoutrements is you bag then you can rely on this film to deliver more of what drew you to the show in the first place. The dancing samurai during the closing credits however…

On the animation front, it seems the big screen budget wasn’t afforded for this project as the visuals are no different than what we have seen on TV, creating the overall veneer more akin of an OVA than a big theatrical release. That said, Production IG has still done a bang up job with the battles, pulling out all the stops to bring us more visually engaging high octane scraps. In one early bout involving Masamune – the wielder of SIX samurai swords – the effect of the collision creates a monstrous mushroom cloud that can be seen for miles and has a devastating effect on everything within the radius. And that was just a passing scrap! Elsewhere Tokugawa flies (yes FLIES) around on what looks like a Mecha samurai while in the background of the battlefield at Sekigahara is a giant hot pot stewing!

The Last Party ends on a slightly ambiguous and open note that suggests more is to come. While nothing has been forthcoming thus far, this may lead to some dissatisfaction in the conclusion we are given. It is certainly an explosive one with a surprise twist to shake things up but after the investment made in the two prior TV series, this just falls a tad short of the lofty expectations engendered by its predecessors.

Ultimately I can’t imagine the truly devoted hardcore fans of Sengoku Basara being too disappointed with The Last Party. It contains all of the elements that make it what it is and is a fine addition to the collection. Undeniably a hugely enjoyable romp it just doesn’t have that climactic oomph one would hope it does.

The Making of The Last Party