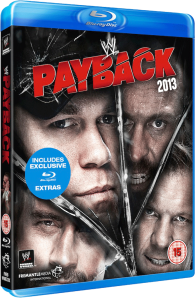 Replacing No Way Out in the annual WWE PPV calendar, Payback emanated from the Allstate Arena in Rosemont, Chicago, Illinois on June 16, 2013 in front of 14,623. There is no real theme attached to this show other than seeing the wrestlers addressing some of the issue that arose in the fallout of Extreme Rules a month earlier.

Your commentators as always are Michael Cole, Jerry Lawler and JBL and while my match review won’t contain any results, expect plenty of opinion.

Originally Fandango was to be the third man in this match but he was sidelined with a concussion, so to spare us another Miz vs Barrett match the latest “Paul Heyman Guy” Curtis Axel (the former Michael McGillicutty aka Joe “son of Mr. Perfect” Hennig) was drafted in as his replacement. Solid match to kick off the show although it followed the “one man down while the other two fight” formula too often without trying to incorporate any fresh three man spots. It does have an innovative finish though which is worth a nod.

AJ won a Battle Royale on RAW here in the UK to earn this title shot but the real story is the “secret admirer” who had been flattering Kaitlyn with texts and gifts and was revealed on RAW prior to this show. No surprises for guessing who was behind that… Anyway, this was a pretty decent match since the ladies were given some time to do something as opposed to the two minutes they usually get and the crowd were invested in it much more than usual too.

This is Ambrose’s first PPV title defence since defeating Kofi Kingston at Extreme Rules and is the latest chapter in the Team Hell No vs The Shield rivalry. Kane lost a previous singles match against Ambrose on Smackdown when Rollins and Reigns interfered, but tonight Ambrose is alone. Nothing too bad or too awful here as it was largely Ambrose bumping for Kane and while the finish may seem like a cop out, it did make sense.

Ziggler won the title when he cashed in the MITB briefcase the night after Wrestlemania 29 but was instantly sidelined with a concussion courtesy of Jack Swagger. This was Ziggler’s first match back and was more popular with the Chicago crowd than Del Rio was. Pretty good match with Ziggler bumping his back side off as usual ending in quite a unique and controversial fashion in terms of character dichotomy.

The match was set up via a verbal spat between Jericho and Paul Heyman while Punk was out of action after Wrestlemania 29, once again arguing over who is the “best in the world”. Even though Jericho was the nominal babyface here, Punk was making his return in front of a hometown crowd. You can guess the rest. Once Punk shrugged off the ring rust, this was a great match as always from these two made better by the partisan crowd. Not sure about the Wolverine sideburns Punk was sporting though.

Following The Shield’s first loss on Smackdown (included in the Blu-ray extras) and the falling out between Bryan and Kane, this tag title match was granted by Vickie Guerrero with Orton teaming with Bryan, cheekily named Team RK-No. Another good match from this combination but sadly once again it was not given the time it deserves. The star of the match, as always, was Daniel Bryan although everyone worked hard, with Rollins bumping like crazy and Reigns showed huge signs of improvement.

Following on from the abysmal and logic defying finish at Extreme Rules, we get this protracted re-match meaning we have to endure three doses of Cena in one night. Hell indeed! This was originally due to be an ambulance match as per Ryback’s challenge on RAW which Cena declined, only to inexplicably accept as part of a Three Stages of Hell match a week later. The first stage was a Lumberjack match, where the fans get to see if they can recognise those faces who are still employed by WWE yet are never seen on TV. Stage two was a Tables match which saw more use of the ring steps than tables and finally an Ambulance match. Some cute stunts involving the vehicle – including the finish – but ultimately what you’d expect from two stiffs.

Top to bottom this was a hugely enjoyable show with some real cracking outings to enjoy. It just goes to show that when WWE focuses on wrestling they can deliver the goods to make even the most jaded fans (hello!) believe in them again. Aside from the exceedingly stale WWE title picture, as we’ve Cena-nuff of the current champ, Payback is a promising indication for the future of the company.

The History of The Shield vs Team Hell No & Randy Orton

Daniel Bryan distances himself from Kane

Team Hell No & Randy Orton vs The Shield